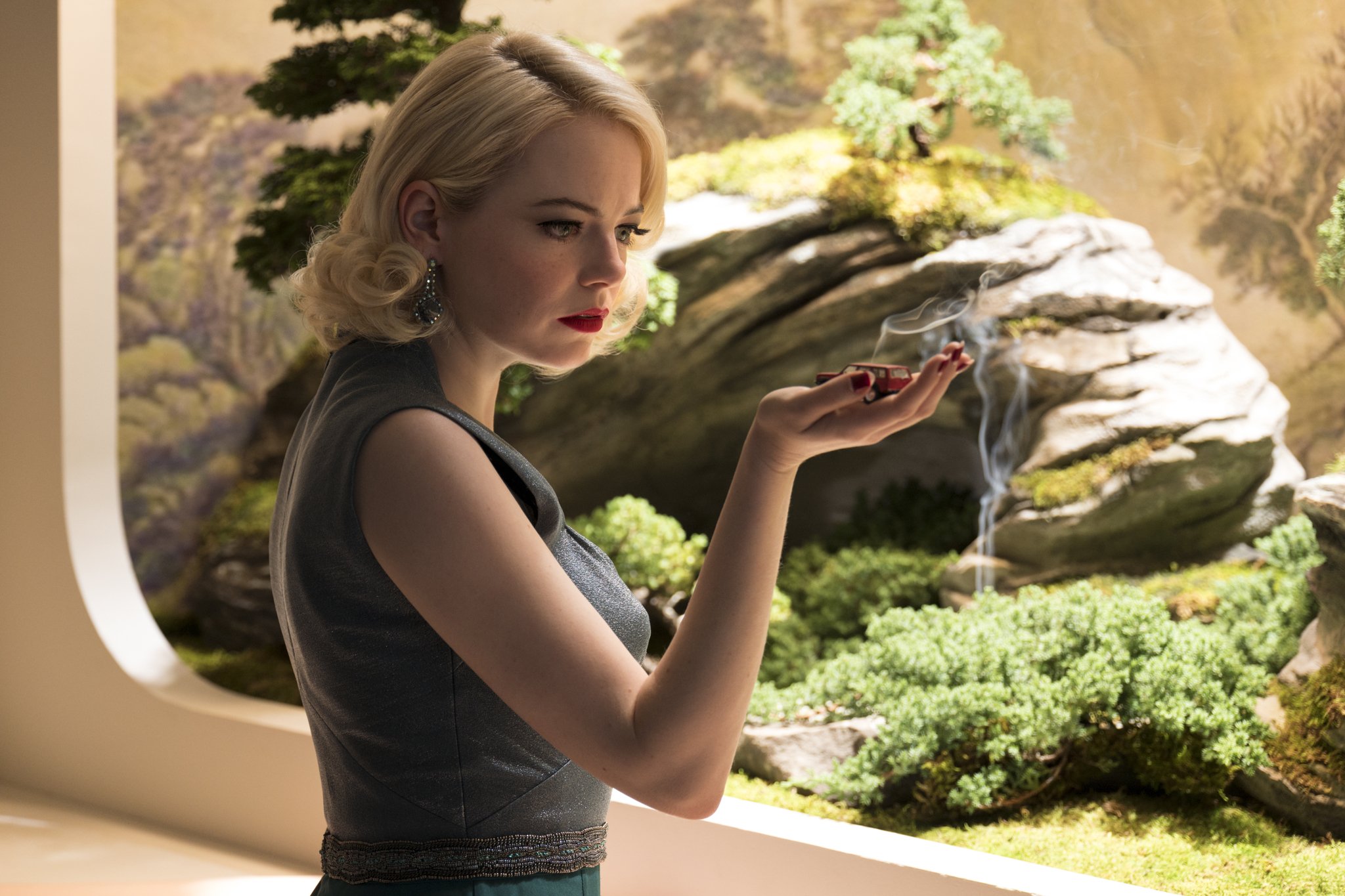 Emma Stone and Jonah Hill play traumatized test subjects in a pharmaceutical trial that promises to take away their pain in Maniac (2018), a Netflix Original limited series that combines science fiction, psychodrama, and dark comedy. Justin Theroux co-stars as the inventor in charge of the test and Sally Field is his mother, a celebrity pop psychiatrist who has given him serious issues he might want to work through.

Loosely adapted from a Norwegian series by creators Amelia Gray (Mr. Robot) and Patrick Somerville (The Leftovers) and director Cory Fukanaga (True Detective), this is a show about an experimental psychoactive drug that “sort of is an experimental psychoactive drug,” according to The New York Times TV critic James Poniewozik. After it establishes the premise, he continues, it “ups the dosage and becomes something unstable, exhilarating and one-of-a-kind, a sci-fi pharmacological dystopian family-therapy dramedy.”

All ten episodes streaming on Netflix.

The Witch (2015, R), subtitled “A New England Folktale,” is a primal horror film rooted in fear and superstition. A family of Puritans in the new world of 17th century America beset by hardships and tragedy become convinced that they’ve been cursed and it’s hard not to see every unsettling act of nature as a sign of evil. It’s dark and spooky and suggestive and leaves you wondering what’s real, what’s imagined, and how much belief guides our perceptions.

Streaming on Netflix. Reviewed on Stream On Demand here.

The most vibrant thrilling of the three collaborations between director Carol Reed and writer Graham Greene, The Third Man (1949) stars Joseph Cotten as a cynical American pulp novelist who searches through the rubble-strewn underworld of post-war Vienna to uncover the truth about the death of his best friend, Harry Lime (Orson Welles), and discovers that his pal is a ruthless black marketeer with blood on his hands. Quaint old-country clichés collide with the reality of the devastation of the war and German expressionist exaggeration mixes with droll, understated British wit to create a continental crime classic, a rogues gallery of profiteers and petty crooks wandering a cinematic landscape of cant angles and long shadows. Welles steals the show with barely ten minutes of screen time and Alida Valli and Trevor Howard co-star.

Streaming on Netflix. Reviewed on Stream On Demand here.

American Horror Story: Cult, the seventh season of the horror anthology series from Ryan Murphy, is on Netflix, Prime Video, and Hulu as the new season begins on FX.

Chris Pratt and Bruce Dallas Howard are back in Jurassic World: Fallen Kingdom (2018, R) to save the genetically-resurrected dinosaurs from a volcano and from international arms dealers. Jeff Goldblum also makes a return appearance. Also on DVD and at Redbox.

Available same day as select theaters nationwide is the end-of-the-world drama I Think We’re Alone Now (2018, R) with Peter Dinklage and Elle Fanning, which won a prize as Sundance, and hostage thriller Bel Canto (2018, not rated) with Julianne Moore and Christopher Lambert.

Sanaa Lathan gets back in touch with her cultural roots in Nappily Ever After (2018, not rated), a romantic comedy co-starring Ernie Hudson and Lynn Whitfield. It’s directed by Haifaa Al-Mansour, the first female filmmaker in Saudi Arabia and director of award-winning Wadjda (2012). Debuts directly to Netflix.

Streaming TV: Josh Groban is The Good Cop in the first season of the Netflix Original comedy and Tony Danza is his corrupt father, a retired NYPD officer who is full of dubious advice.

True stories: the Netflix Original documentary Reversing Roe (2018) traces the politicization of an issue that is becoming more immediate to many Americans. Also new is Quincy (2018, not rated), a portrait of legendary music producer Quincy Jones directed by his daughter, Rashida Jones.

Saoirse Ronan and Billy Howle are idealistic but unprepared young newlyweds in On Chesil Beach (2018, R), Ian McEwan’s adaptation of his own novel.

Foreign language TV: The Adventures of Captain Alatriste (Spain, with subtitles) is a historical swashbuckler based on the international best-sellers by Arturo Pérez-Reverte.

Local alert: indie steampunk web series Rocketmen (2018, not rated), set and shot in Seattle, has been edited into a short feature.

Foreign affairs: The Fencer (2018, Finland, not rated, with subtitles), based on a true story, was Finland’s official selection for the Academy Award for best foreign language film and Isabelle Huppert is Mrs. Hyde (France, 2018) in the horror comedy co-starring Romain Duris.

True stories: Black Code (2018, not rated) examines how government control the Internet to limit citizens’ access to information and Our Blood is Wine (2018) looks at winemaking traditions in the Republic of Georgia revived after the end of Soviet rule.

The feature-length My Little Pony: The Movie (2017, G) features guest voices from the likes of Emily Blunt, Liev Schreiber, and Zoe Saldana (Prime Video and Hulu).

In The Queen (2006, PG-13) Helen Mirren, acting royalty in her own right, earned a well-deserved Oscar for her portrayal of Queen Elizabeth II, the professional monarch struggling to find her place as her people’s leader after the death of Princess Diana. It’s not merely animosity toward the “people’s princess” that she felt betrayed the royal code, but an inability to imagine changing decades of regal behavior and emotionless diplomacy in the face of her people’s need for a show of respect. Michael Sheen is the newly elected man-of-the-people Tony Blair, elected on promises of reform and breaking down barriers of privilege yet personally rather awed by Elizabeth. Stephen Frears compassionately explores the awkward relationship between the informal Blair and the proud but dedicated Queen as he helps her (despite her chilly reticence) win back the love of her people. James Cromwell co-stars as Prince Philip and Sylvia Syms is the Queen Mother.

Wes Anderson’s Moonrise Kingdom (2012), a sweet and playful tale of adolescent misfits and romantic runaways, is funny and full of nostalgic blasts of 1960s pop culture, but most of all it is an affectionate portrait of dysfunctional adults who are nudged into becoming better parents. Bill Murray, Frances McDormand, Edward Norton, and Bruce Willis lead the great cast. PG-13 for sexual situations and smoking. Reviewed Stream On Demand here.

Streaming TV: Michelle Dockery is back as a con woman in love with a hitman in Good Behavior: Season 2.

True stories: BB King: On the Road (2018) profiles the legendary blues guitarist and Boom for Real (2017, not rated) looks at the early hears of artist Jean-Michel Basquiat.

Anna Kendrick, Rebel Wilson, and the a cappella gang are back in Pitch Perfect 3 (2017, PG-13) for one more chorus.

TCM Select Pick of the Week is Orson Welles’ Citizen Kane (1941), so longed hailed as “the greatest film ever made” that’s it’s become a dry truism. The legends surrounding the film have long overshadowed the actual production and its reputation is in serious danger of becoming the least seen masterpiece around. Above all, Welles was a showman and “Citizen Kane” a three ring circus of cinematic ingenuity, a startlingly entertaining blend of dime store melodrama, historical biography, detective story, political drama, storytelling confabulation, and plain old theatrical flourish. Years ahead of its time in its layered use of sound and score, stunningly designed and brilliantly conceived, “Citizen Kane” is a vital, moving, exciting moment of American cinema brought back to life with every screening. Streaming through December 27.

It’s part of the collection “Deep Focus: The Cinematography of Gregg Toland,” a tribute to the pioneering director of photography that includes the romantic classic History Is Made at Night (1937) and his work with directors John Ford (The Long Voyage Home, 1940) and William Wyler (Wuthering Heights, 1939; The Little Foxes, 1941), all streaming through March 14, 2019.

Also new: “Star of the Week: James Mason” collects 20 features from across the actor’s rich career, including such lesser-seen classics Pandora and the Flying Dutchman (1951) and The Man Between (1953), and “Director of the Week: Eric Rohmer” presents all six “Moral Tales” and the sublime The Green Ray (aka Summer) (France, 1986, with subtitles).

The first two seasons of the British mystery series Wire In the Blood: Series 1-2 (2002-2004) with Robson Green as a criminal profiler now available, with additional seasons on the way.

All ten seasons of The Octopus (Italy, 1984-2001, with subtitles), an epic Mafia drama on the battle against the global criminal network centered in Sicily, debut on MHz.

Sorry For Your Loss, a half-hour drama with jabs of dark humor starring Elizabeth Olson as a young widow working through her grief, begins on Facebook Watch. Four episodes now streaming, new episodes on Tuesdays. Also new are the adult animated comedies Human Kind Of and Liverspots and Astronots.