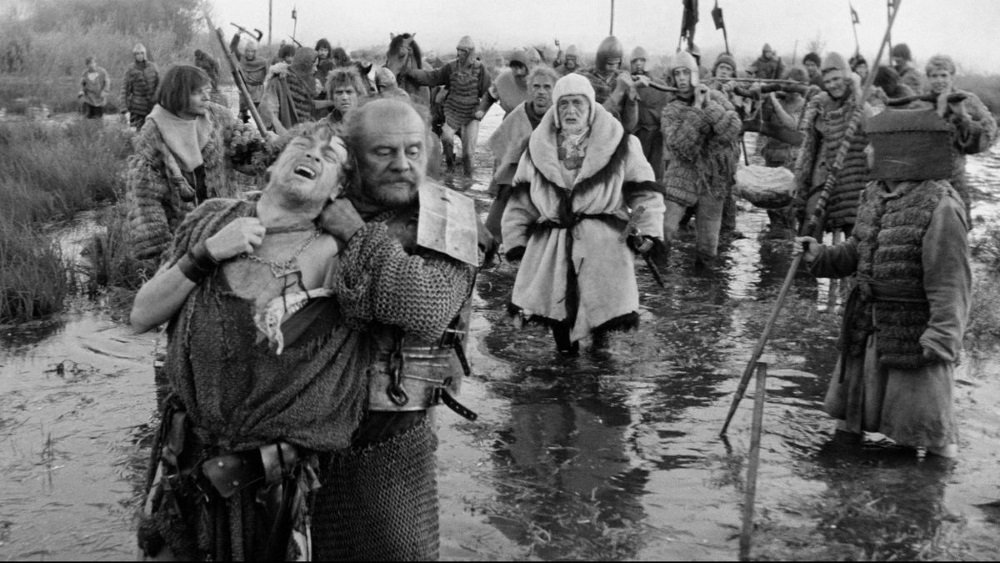 Marketa Lazarova (Czechoslovakia, 1967), an epic based on one of the revered masterpieces of Czech literature (considered unfilmmable by many), was voted the greatest Czech film ever made in a 1998 poll of Czechoslovakian film critics and professionals. Yet it is all but unknown in the U.S., rarely revived and never on home video before Criterion’s release in 2013. Its director, František Vláčil, is a self-taught filmmaker who skipped film school and brought a sensibility rooted in painting and poetry to the screen. He’s also largely unknown in the U.S., overshadowed by fellow Czech directors like Milos Forman, Jiri Menzel, and Ivan Passer.

Set in 13th century Czechoslovakia, in a medieval culture of warring feudal lords, it’s a film of primal imagery, poetic filmmaking, and ephemeral storytelling that looks hewn out of the stone and wood and the very earth of the ground beneath it. It’s an ancient tale, says the narrator, and it unfolds like chapters of overlapping stories, or perhaps stanzas of an epic poem, with sketches of characters and impressions of moments and images that sculpt an untamed world into magnificent visions both primal and poetic.

Kozlík (Josef Kemr), the brutish pagan patriarch of a predatory bandit clan preying on travelers, and Lazar (Michal Kozuch), the king’s man and a Christian, go to war when the Kozlík’s boys kidnap the son of a visiting German count and Lazar is charged with recovering the boy and punishing the captors. It begins a brutal campaign of ambushes and tortures and escalates to open warfare, all played out against a vast sky of perpetual gray a landscape wild and untamed but for the protected human habitats (where the earth is worn down to muddy bogs between the lonely stone buildings), littered with the human dead lost to war and vengeance and medieval justice.

Marketa (Magda Vásáryová) is the virginal daughter of Lazar, an innocent blonde beauty in a world of grimy, predatory devils, promised to the convent but defiled by the Kozlik clan. Contrasted against the violence of the men and the barbarian brutality of Kozlik, a man who crippled his own mute son to teach him a lesson, her resilience and unbroken spirit is a glimmer of hope in a savage world.

I can’t pretend to fathom it all on one viewing—this is clearly a film that invites repeated visits—but it is a transporting cinematic experience. For all the death and human horrors, I come away with the beauty of some of the images captured against this landscape, at once majestic and desolate, and the grace and forgiveness that some of these characters bring despite the horrors of this life. The images and themes and narrative mysteries turned through my head for days after seeing it.

Not rated, in Czech and German with English subtitles

Add to My List on The Criterion Channel or Watch it on Kanopy, a free streaming service available through most library systems

and other services. Availability may vary by service.
Marketa Lazarova [DVD]

The 165-minute film is released on single-disc Blu-ray and two-disc DVD, in Czech and German with English subtitles, transferred from a 4K digital restoration made from the original camera negative and a fine grain print. It looks, in a word, stunning, and in addition to the superb restoration, Criterion offers a rich collection of new video interviews.

“Marketa’s Actors” is a 40-minute interview featurette with actors Magda Vášáryová, Ivan Palúch, and Vlastimil Harapes, who talk about working on the film as well as their own careers outside of the film. Film historian Peter Hames and film critic Antonín Liehm provide helpful background and context, and there are interviews with the film’s costume designer Theodor Pištek and restoration technical director Ivo Marák.

On the archival side is the 20-minute documentary “In the Web of Time” featuring an interview with director František Vláčil himself, talk generally about his career and his filmmaking approach, and a gallery of Vláčil’s storyboards. The accompanying 40-page booklet features new essays by film scholar Tom Gunning and author and translator Alex Zucker and a 1969 interview with Vlácil by Antonín Liehm.