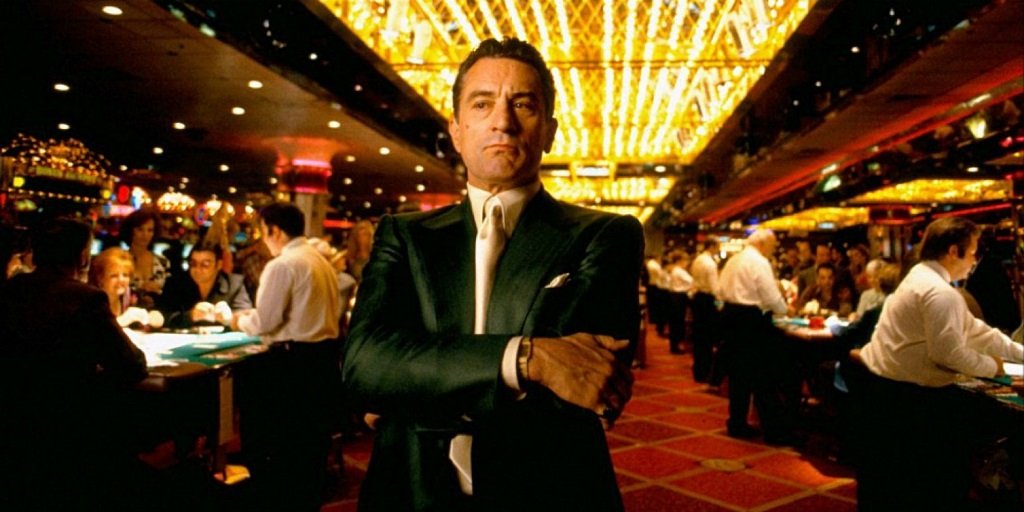 “In the casino, the cardinal rule is to keep them playing and to keep them coming back. The longer they play, the more they lose, and in the end, we get it all.”

Five years after his gangland masterpiece GoodFellas, Martin Scorsese reunited with writer Nicholas Pileggi and stars Robert De Niro and Joe Pesci for Casino (1995), an even more ambitious mob epic of organized crime in 1970s Las Vegas. De Niro is ace oddsmaker Sam “Ace” Rothstein, a gambling genius and perfectionist sent to turn the Tangiers into a cash machine for the Midwest mob and Pesci is his boyhood pal, a nitroglycerin-primed enforcer who moves into Vegas just as the gaming officials start to crack down on organized crime.

Scorsese spends the first half of the sprawling three-hour epic laying out the entire operation in fascinating detail—it’s not simply exposition, it’s the ultimate how-to as a thrilling piece of cinematic gamesmanship—and last half watching it all unravel through greed, arrogance, hubris, and the unleashed, monstrous id of Pesci’s blood simple thug, right through to the clean-up as the mob ruthlessly eliminates loose ends. It’s amazingly deft for such an epic portrait and Scorsese’s ambition has the tendency to get the better of the film, which is almost too busy for its own good. Almost. The camera never stops moving, every frame is packed with detail, the commentary provides revealing counterpoint to the images, and the editing dances through the ambiguities and the contradictions. It may have been too much for audiences to take in on a single viewing.

Perhaps a second look is in order.

, iTunes, GooglePlay and/or other services. Availability may vary by service.
Casino [Blu-ray]

The Blu-ray and DVD editions from Universal Home Video feature commentary by director Martin Scorsese, writer Nicholas Pileggi, film editor Thelma Schoonmaker, producer Barbara De Fina, costume designer Rita Ryack, and actors Sharon Stone and Frank Vincent (edited together into a “Moments With” collection of recollections), deleted scenes, the a collection of documentaries and featurettes. There’s “Casino: The Story” (on the book and the script), “Casino: Cast and Characters” (the real people behind the script’s characters), “Casino: The Look” (the art direction and design), and “Casino: After the Filming” (editing, scoring, and releasing the film), plus the made-for-TV documentary “Vegas and the Mob” and the History Channel documentary “Great Mob Writers: Nicholas Pileggi.”