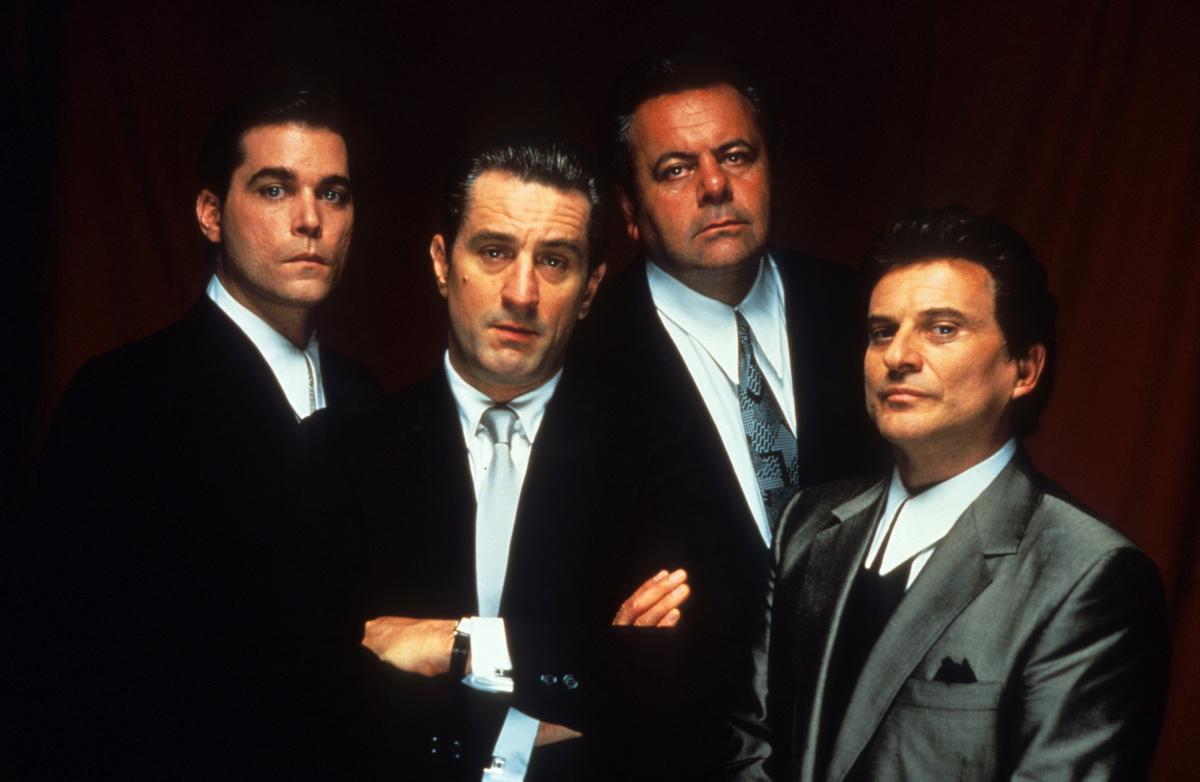 “As far back as I can remember, I always wanted to be a gangster.”

GoodFellas (1990), Martin Scorsese’s violent, dynamic, exhilarating adaptation of Nicholas Pileggi’s non-fiction book Wiseguy, about real-life wiseguy-turned-witness against the mob Henry Hill, exploded across screens in 1990 and was embraced as the first great American gangster movie since Coppola’s The Godfather (1971).

The stylistic blast of what is surely the first rock and roll gangster movie revels in the glamour then twists on the brutality of the mob life as experienced by the ambitious, amoral foot soldier Hill, played to perfection by Ray Liotta. His wide-eyed, willfully oblivious remembrance instills the story with a nostalgic reverence for a parasitic existence and the assumed entitlement that comes with the territory. Living from scam to scam, only an arrest away from complete collapse, Liotta’s Hill sees only the street cred and celebrity that he dreamed of as a neighborhood errand boy to the made men of the mob. He’s so caught up in the lifestyle he never stops to take stock of his life until it crashes down on him.

Scorsese’s barely fictionalized adaptation of Hill’s memoir captures the charge of being a mobster on New York in the sixties and seventies without glorifying the behavior by keying into Hill’s willfully self-deluded perspective. The unbridled thrill of power within his neighborhood fiefdom (Liotta’s stroll through the back of a nightclub restaurant to a front row table is pure cinematic ecstasy) spirals into a drug-fueled paranoia delivered in an unnerving tour-de-force of edgy energy and pathetic self-pity of a wannabe criminal aristocrat turned stool pigeon.

The only false note is the way Hill refuses any responsibility for the murders strewn through his life. Scorsese and Pileggi play into his denial but they also show up the sham of the criminal code for what it is. For all the talk of respect and rules (you don’t rat, you don’t hit a made guy), the film blows every “honor among thieves” romantic fantasy out of the water. They are bullies, psychos, predators, and scavengers, immature and unrestrained children who mistake intimidation for respect. Every single one of them is out for himself, for power or money or self-aggrandizement or, when their own position is in danger, for pure survival.

Robert DeNiro takes top billing as veteran mob lieutenant Jimmy Conway, whose own spiral into paranoia has less to do with drugs than pure greed, Joe Pesci is Tommy DeVito (“I’m funny how? Funny like a clown? I amuse you? I make you laugh?”), Lorraine Bracco is the nice Jewish girl who dives head-first into the moral compromise and self-denial of becoming a mob wife, and Paul Sorvino the paternal yet ruthless mob boss Paul Cicero. For all his sense of command, by the end of the film we see that he’s no Godfather, looking out for the neighborhood folks like some feudal lord. He’s just the king of the parasites, in it for himself.

It was nominated for five Academy Awards, including best picture and best director (it lost both to Dances With Wolves), and won for supporting actor Joe Pesci.

On Blu-ray and DVD from Warner Bros. Home Entertainment. The Blu-ray and DVD 2-Disc Special editions come with some terrific supplements. There’s a dense, scene specific commentary track edited together from observations by director Martin Scorsese, writer Nicholas Pileggi, producers Irwin Winkler and Barbara De Fina, cinematographer Michael Ballhaus, editor Thelma Schoonmaker, and actors Ray Liotta, Lorraine Bracco, Paul Sorvino, and Frank Vincent that plays like an illustrated audio documentary (if you play it with the function that automatically jumps to every scene with commentary). A second “Cop and Crook” commentary by the real Henry Hill and FBI agent Edward McDonald, who turned Hill and brought him into the witness protection program, is not as interesting as it could be. The half-hour documentary “Getting Made” features new and archival interviews and some priceless behind-the-scenes footage of Scorsese on the set (a section on the famous tracking shot from the street through the nightclub kitchen to a table in the front is a highlight), the 8-minute “The Workaday Gangster” is dominated by Henry Hill’s remembrances of his life, and “Made Men: The Goodfellas Legacy” is a 13-minute appreciation by filmmakers (among them Joe Carnahan, Antoine Fucqua, the Hughes Brothers, and Richard Linklater) who discuss the impact and influence of the film on them.

The “25th Anniversary Edition” Blu-ray doesn’t have that bonus disc but it features a newly remastered version of the film transferred from a 4K scan, which makes it the definitive Blu-ray edition (as of this writing).