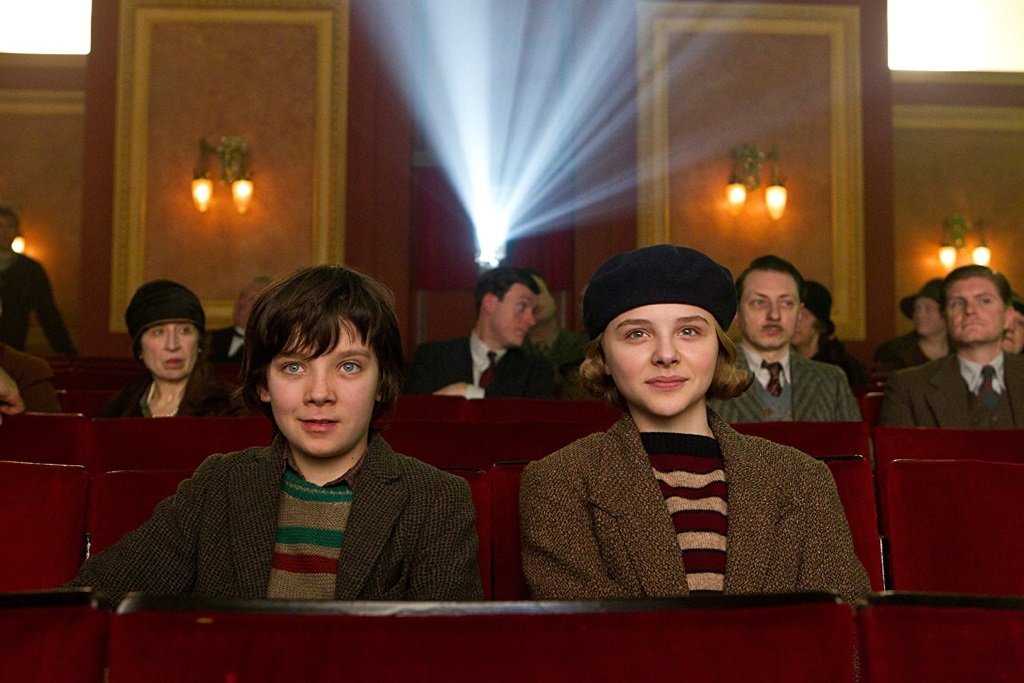 Hugo (2011), Martin Scorsese’s first family film (it’s PG!) and his first engagement with 3D, is a love letter to the magic of cinema. Based on the novel by Brian Selznick, it is a tribute to early film pioneer George Méliès (played by Ben Kinsgley), a child’s adventure through a grown-up world of loss and discovery, and a fantastical recreation of 1920s Paris as a playground for a clever orphan (Asa Butterfield) and a spirited girl (Chloë Grace Moretz) to solve a mystery.

Even without 3D, this is a visual delight, from the dazzling recreation of the Montparnasse Train Station (since transformed into the Musee D’Orsay, one of the most famous art museums in the world) and the labyrinthine clockworks and passages behind the walls to the dramatization of Méliès creating his most fantastic screen dreams in his film studio. And Scorsese fills every frame with defining and playful detail (look for Django Reinhardt in the café band and Salvador Dali having coffee) and the bustle of life and character.

Befitting such an impassioned tribute to the glories of early cinema and the creators of yesteryear wonders, it is a cinematic playground of technique and color and imagination, as well as an affectionate childhood adventure. Sacha Baron Cohen, Ray Winstone, Emily Mortimer, and Christopher Lee co-star.

, iTunes, GooglePlay and/or other services. Availability may vary by service.
Hugo [Blu-ray/DVD Combo]

On DVD and Blu-ray from Paramount with the 19-minute “Shoot the Moon: The Making of Hugo,” a conventional but lively featurette that offer a general survey of the film’s origins, casting, design, production and use of 3D technology.

The Blu-ray adds more featurettes: “The Cinemagician, George Melies,” a 15-minute introduction to the real-life cinema pioneer portrayed by Kingsley that uses clips from the film as illustration; “The Mechanical Man at the Heart of Hugo,” a 12 minute survey of the pre-robot clockwork creations of the 19th and early 20th centuries; the brief “Big Effects, Small Scale,” with looks at the miniatures used for the runaway train crash of the dream-sequence, and the comic “Sacha Baron Cohen: Role of a Lifetime,” which is just a tongue-in-cheek lark. Also features a bonus DVD and UltraViolet digital copy for download and instant streaming. There’s also a Blu-ray 3D edition (for 3D compatible monitors and players) in a three-disc combo pack.