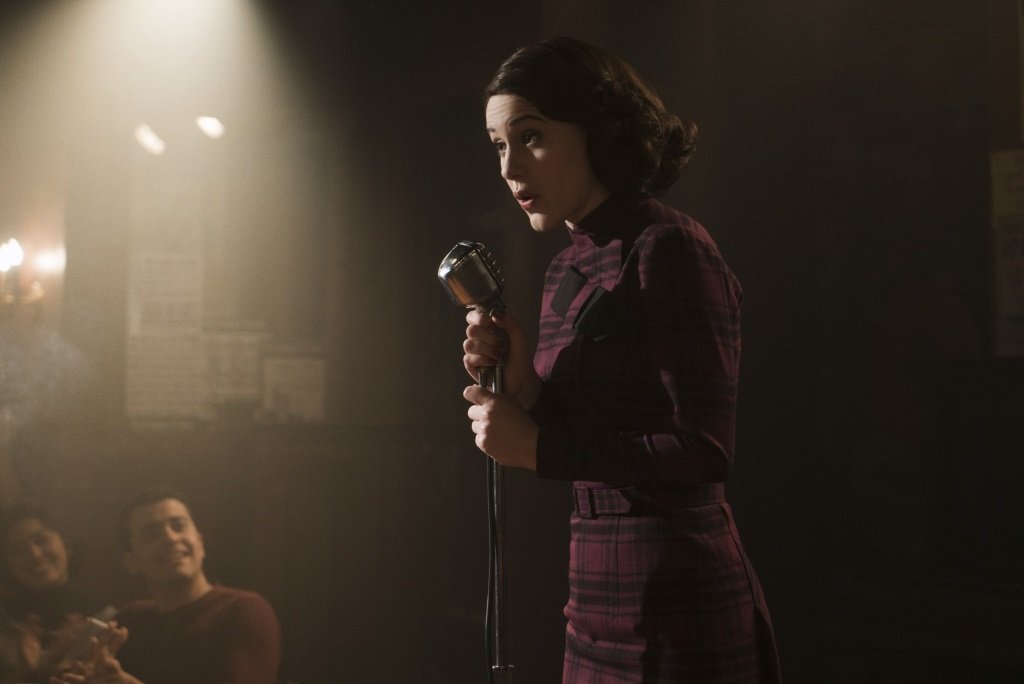 Amazon Prime’s new original series The Marvelous Mrs. Maisel stars Rachel Brosnahan as a driven Upper West Side housewife who lands in the stand-up comedy culture of late 1950s Greenwich Village after her husband leaves her for his stenographer. It’s from Amy Sherman-Palladino, creator of Gilmore Girls, and while neither she nor Brosnahan come from a stand-up background, they create terrific tour through the culture of open mike nights, folks and jazz clubs, and the changing face of American stand-up comedy as Lenny Bruce pushes boundaries and Redd Foxx goes blue. Meanwhile she struggles against the expectations of parents (Tony Shalhoub as her kvetching college prof dad, Marin Hinkle as her peacemaking mother) when she decides she’d rather not take her cheating husband back.

The period piece and fifties pop culture reference are fun and it offers a bracing heroine in an overwhelming male culture and an alternate perspective on American social culture from Mad Men. It’s also often quite funny: Midge Maisel is part of the new generation of storytelling acts and observational humor and Brosnahan knows how to nail a delivery.

The first Netflix original series from Germany, Dark is a blend of supernatural thriller, science fiction, and crime drama with a mystery tangled up a nuclear power plant and events that reach back many generations in the gloomy, remote town.

Robert Lloyd describes it as “a beautiful, German-made minor-key tone poem in the shape of a puzzle-box sci-fi mystery television series” in his Los Angeles Times review. “The series has, notably, several things in common with its slightly older Netflix cousin Stranger Things, though the mood is more Stanley Kubrick than Steven Spielberg, and more naturalistic than either.”

10 episodes on Netflix, with subtitles.

Martin Scorsese’s Silence (2016, R), adapted from the novel by Shûsaku Endô, stars Andrew Garfield and Adam Driver as Jesuit missionaries from Portugal in 17th century Japan, where Christianity has been outlawed. Scorsese grapples with faith in the face of persecution in an austere, introspective production on a magnificent canvas. On Amazon Prime and Hulu.

Emily Blunt is The Young Victoria (2009, PG) in the drama about the early years of the British queen.

Foreign affairs: Moviemaking comedy The Queen of Spain (Spain, 2017, not rated, with subtitles) stars Penelope Cruz as an international movie star who returns from Hollywood to make a costume epic in 1956 Spain. Also new: My Happy Family (Georgia, 2017, not rated, with subtitles) follows a woman who strikes out for independence in a male-dominated culture.

True stories: Voyeur (2017, not rated) follows journalist Gay Talese on the trail of a fascinating story that takes an unexpected turn and draws the author into the spotlight. Also new: Forbidden Games: The Justin Fashanu Story (2017, not rated), about the first professional soccer player to come out as gay, and The Farthest: Voyager in Space (2017, not rated) about the historic space probe.

For kids there’s My Little Pony: Friendship Is Magic: Season 7 Part 2, All Hail King Julien: Season 5, and the holiday specials DreamWorks Home: For the Holidays and A StoryBots Christmas.

Any resemblance between The Circle (2017, PG-13) and the culture of Google and Facebook is purely intentional in this adaptation of the Dave Eggers satire with Emma Watson and Tom Hanks.

Gremlins 2: The New Batch (1990, PG-13), the rare sequel funnier than the original, is a veritable live-action cartoon with a sneaky wit and absurdist humor.

True stories: The Incomparable Rose Hartman (2016, not rated) profiles the American photographer who chronicled culture and fashion in New York City for decades.

Also new: Ogar: Will Of Steel (2017, not rated) on paralyzed CrossFit athlete Kevin Ogar and Manny (2015, not rated) on Filipino boxing champion Manny Pacquiao, and Razing the Bar (2014, not rated), which profiles Seattle’s iconic punk rock venue The Funhouse.

Steve Martin and Michael Caine are Dirty Rotten Scoundrels (1988, PG) in the con man comedy set on the French Riviera.

Also new: action fantasy Warcraft (2016, PG-13), based on the humans-vs-Orcs video game, and crime thriller Marauders (2016, R) with Bruce Willis, plus the original documentary Meth Storm (2017, not rated) about the addiction crisis in rural America.

Kristen Stewart is an American Personal Shopper (France, 2016, R, in English and French with subtitles) to a French celebrity in Paris in the enigmatic ghost story/murder mystery from filmmaker Olivier Assayas.

FilmStruck adds five films based on the stories of Graham Greene, including the hard-edged crime drama Brighton Rock (1947) with young Richard Attenborough as a sociopath and The Third Man (1949) with Joseph Cotten, Alida Valli, and Orson Welles as Harry Lime (reviewed on Stream On Demand here).

New on Criterion Channel this week is the It’s a Mad, Mad, Mad, Mad World (1963, G), the sprawling epic slapstick comedy with an all-star cast, and Wong Kar-Wai’s Happy Together (Hong Kong, 1997, not rated, with subtitles) with Leslie Cheung and Tony Chiu-Wai Leung as tempestuous lovers stuck in Buenos Ares.