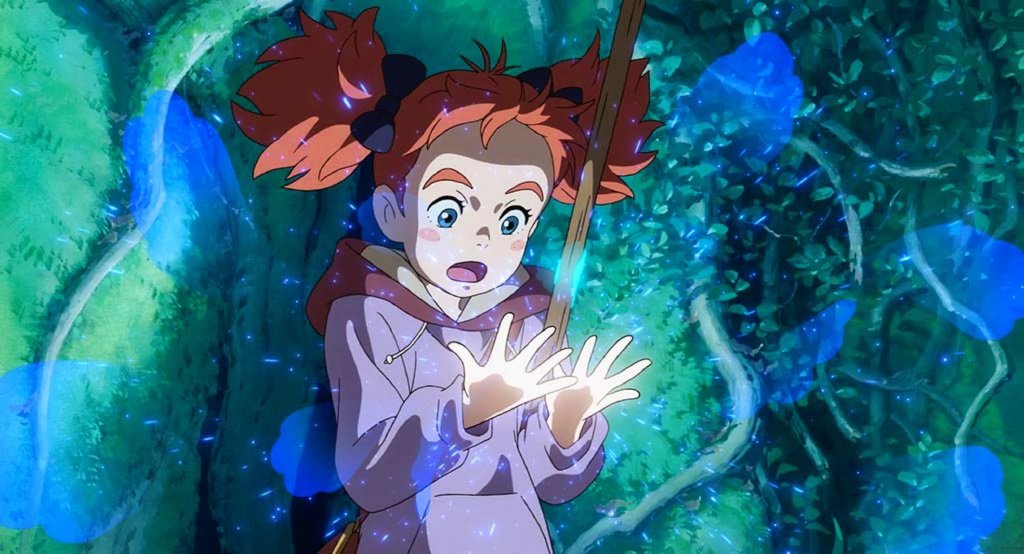 Mary and the Witch’s Flower (Japan, 2017), the magical fantasy by Japanese animator and filmmaker Hiromasa Yonebayashi (director of the marvelous When Marnie Was There) follows the adventures of a schoolgirl who receives magical powers from a magical flower that blooms once every seven years.

Mary (voiced by Ruby Barnhill, the girl in Steven Spielberg’s The BFG, in the English language version) is a transfer student moved into her great aunt’s rural manor in advance of her parents. She doesn’t know a soul and, with no internet, TV, or video games, she distracts herself in the garden and the woods, which has absorbed the dormant magic of a fallen young wizard years before. It bestows the energy on the curious girl and on a flying broom that whisks Mary away to Endor College, a Hogwarts-like school of magic run by headmistress Madam Mumblechook (voiced by Kate Winslet in the English language version) and a wizard scientist (Jim Broadbent) who want the magical flower for their own experiments.

Yonebayashi was an animator for Hayao Miyazaki at Studio Ghibli and he honors the master’s work with his sweet, playful film (adapted from a children’s novel by British author Mary Stewart) and his young heroine. The self-conscious, timid Mary, with her wild red hair and innate clumsiness, rouses her courage and finds the strength to fight the adult wizards when they kidnap a human boy to force Mary to bring them the rare buds.

The 1971 source novel came decades before the Harry Potter books and the film offers its own version of a magic school fantasy. The clean hand-drawn animation and storybook images offers a lovely alternative to the busy computer animated films that dominate American screens. It’s a simple, uncomplicated film that never reaches the dramatic power or mythic scope of the Miyazaki’s greatest films but is entertaining and enjoyable in its own right.

Leaves Hulu at the end of November. Add to My Stuff on Hulu

, iTunes, GooglePlay and/or other services. Availability may vary by service.
Mary and The Witch’s Flower [Blu-ray]

Mary and The Witch’s Flower [DVD]

The Blu-ray+DVD combo and DVD only editions from Universal Home Video presents the film with Japanese and English language soundtracks and optional English subtitles, plus featurettes and filmmaker interviews (in Japanese with subtitles).