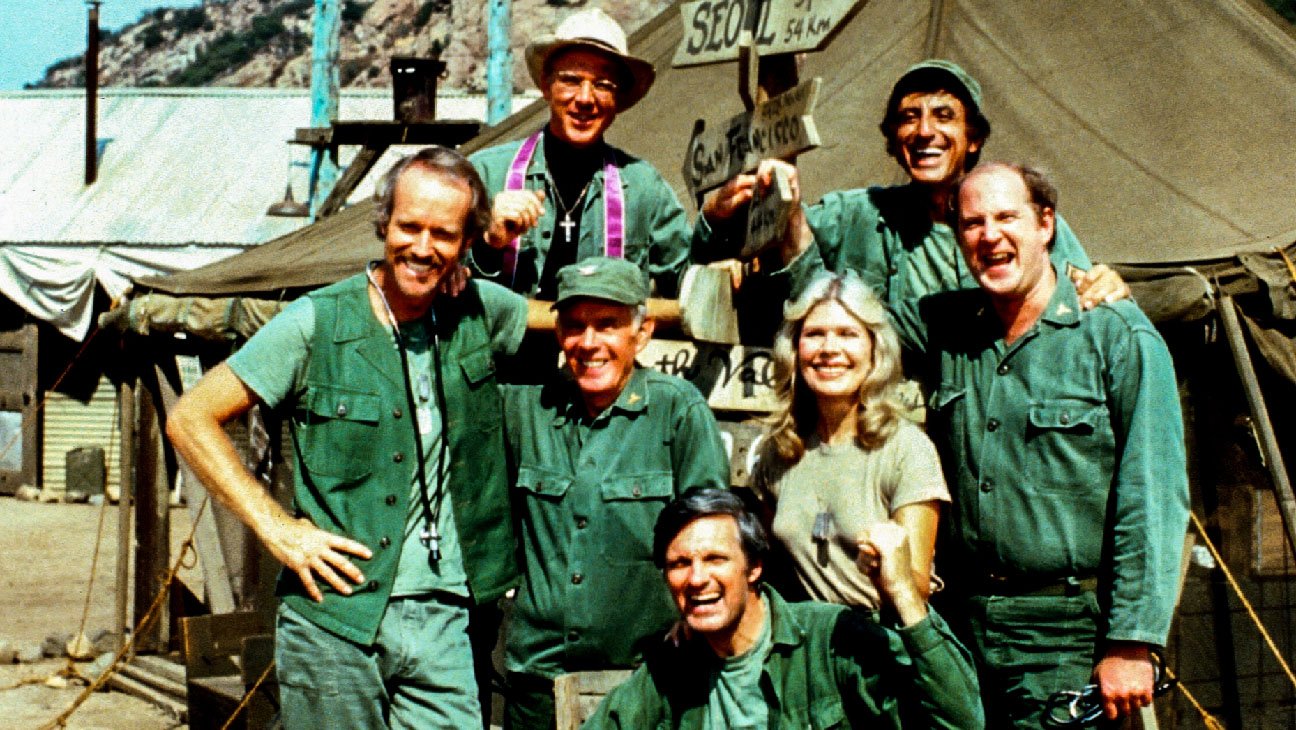 The joke at the networks was that the hit sitcom M*A*S*H (1972-1983), based on Richard Hooker’s novel and Robert Altman’s anarchic 1970 film about an American surgical unit in the Korean War, lasted longer than the war itself.

True enough, and over the 11-year run of the show it evolved from irreverent comedy and cartoonish characters to socially conscious comedy that used humor to delve into serious issues. Alda Alda and Loretta Swit, who played Hawkeye Pierce and Margaret “Hot Lips” Houlihan respectively, starred in all 251 episodes of the series and presided over the evolution of their characters along the way, with Houlihan losing her nickname completely before the show was half over.

The series, developed for TV by Larry Gelbart, was a radically different show in the first season than the one that most audiences remember. It opens with most of the characters from Altman’s movie intact—surgeons Hawkeye, Trapper John (Wayne Rogers), and Major Frank Burns (Larry Linville) bunking in “the Swamp,” Houlihan a career officer running the nursing staff (and having an affair with the married Maj. Burns), Lt. Col. Henry Blake (McLean Stevenson) trying to hold the unit together in the chaos, and company clerk Radar O’Reilly (Gary Burghoff, the only returning cast member of the movie) actually keeping it all running by managing the bureaucracy of the armed services. William Christopher took over the role of camp chaplain Father Mulcahy in the second episode and Corporal Klinger (Jamie Farr) appeared in drag for the time in the fourth episode.

The pilot episode comes closer to the anarchy and irreverence of the original film than anything that follows, though the humor is less cruel than Altman’s often caustic vision, and it features Timothy Brown as Spearchucker Jones (his role disappeared sometime in the first season) and a different Father Mulcahy (George Morgan). The highlight of the season, however, is the classic episode “Yankee Doodle Doctor,” a documentary lampoon with Alda and Rogers playing Groucho and Harpo Marx in the operating theater.

It was nominated for eight Emmy Awards for its debut season and won four Emmys in its second season, including two acting awards for Alda and the Emmy for outstanding comedy series. The season also introduced two of the show’s greatest recurring characters: Sidney Friedman (Alan Arbus), everyone’s favorite army shrink, who arrives in “Deal Me Out” to help a soldier with battle fatigue and Col. Samuel Flagg (Edward Winter), the paranoid agent forever searching for traitors. The third season was the final on for Trapper John (his discharge was entirely offscreen) and Colonel Blake, and the season ended with a tragic twist that announced the ambitions of the show to reach far beyond the familiar conventions of the sitcom. Much of the transformation was shepherded by series star Alan Alda, who took a more active interest behind the camera as the series went on, eventually directing 32 episodes and writing 19 episodes.

Season four opens with B.J. Hunnicutt (Mike Farrell) taking up residence in the Swamp and veteran army man Colonel Potter (Harry Morgan) riding in to take charge of the camp from acting commander Burns. The season that marks a turning point in the series: the madcap antics become more grounded, the caricatures settle into characters (except for Frank Burns, ever the ferret faced hypocrite), and the anarchic spirit gave way with the more serious underlying themes. Among the highlights are the hour-long season opener “Welcome to Korea” and the season finale “The Interview,” a newsreel-style presentation starring Clete Roberts as himself interviewing the personnel of the 4077, which TV Guide named one of the greatest episodes in TV history. In season five, Margaret gets engaged to Donald Ponifscott in the second episode and married in the finale (which doesn’t do anything for Frank’s fragile sense of importance) and Sidney Friedman (Alan Arbus), everyone’s favorite army shrink, returns in “Dear Sigmund,” one of the show’s familiar “letter” shows directed by Alan Alda.

Season six opens with an hour-long episodes that completes the transformation of the show: Major Frank Burns goes berserk when Major Margaret Hoolihan gets married and he gets shipped stateside, and Hawkeye and B.J get a worthy adversary when blueblood Charles Emerson Winchester III (David Ogden Stiers) joins the staff of the 4077 Mobile Army Surgical Hospital. The Swamp will never be the same. In other episodes, Doctor Sidney Friedman returns, this time as a patient himself, in the episode “War of Nerves” (written and directed by Alan Alda) and Hawkeye and Margaret find unexpected comfort in one another’s arms when they get trapped behind enemy lines. Season seven follows Margaret’s painful divorce and features Clete Roberts reappearing as himself in the two-part mock-newsreel episode “Our Finest Hour,” the show’s first-person POV episode “Point of View,” and the Emmy Award winning episode “Inga” with Mariette Hartley as a visiting Swedish nurse.

The eighth season sees the farewell of its mascot Radar O’Reilly (Gary Burghoff) and the promotion of Corporal Klinger (Jamie Farr) to company clerk, which he stumbles through during Radar’s final fling on leave in Tokyo in the two-part episode “Good-bye Radar.” The upheaval soon settles back to the usual anarchy, with Klinger shedding his spectacular wardrobe for olive fatigues and giving snappy banter to Colonel Potter’s orders. Winchester finds himself in an unusual entanglement after a lost weekend leave in “Mr. and Mrs. Who?,” Alda directs the memorable “Life Time,” where a clock counts down the 20 minutes a wounded soldier has to receive a graft before death or paralysis, and the nightmare-haunted “Dreams.” Hawkeye tries to go a week without a drink in “Bottle Fatigue” and clashes with another doctor (Alda’s real-life father Robert Alda) in “Lend a Hand.”

Season nine features the stand-out episode “Death Takes a Holiday,” where the staff works to keep a terminally ill soldier alive past the holidays for the sake of his family, and a visit from Margaret’s old army dad (Andrew Duggan) in “Father’s Day,” and the season finale “The Life You Save,” which gives the arrogant Winchester his own story. By season eleven, the team chose to end the series while it was still riding high in the ratings and Alda wrote and directed the series finale “Goodbye, Farewell and Amen,” which sent its characters home at the end of the war and became most watched program in TV history, a record it held for almost 30 years.

Also on Blu-ray and DVD and on SVOD through Amazon Video, iTunes, GooglePlay, Vudu and/or other services. Availability may vary by service.
M*A*S*H: The Martinis and Medicine Collection [DVD]
M*A*S*H: The Complete Series + Movie [DVD]