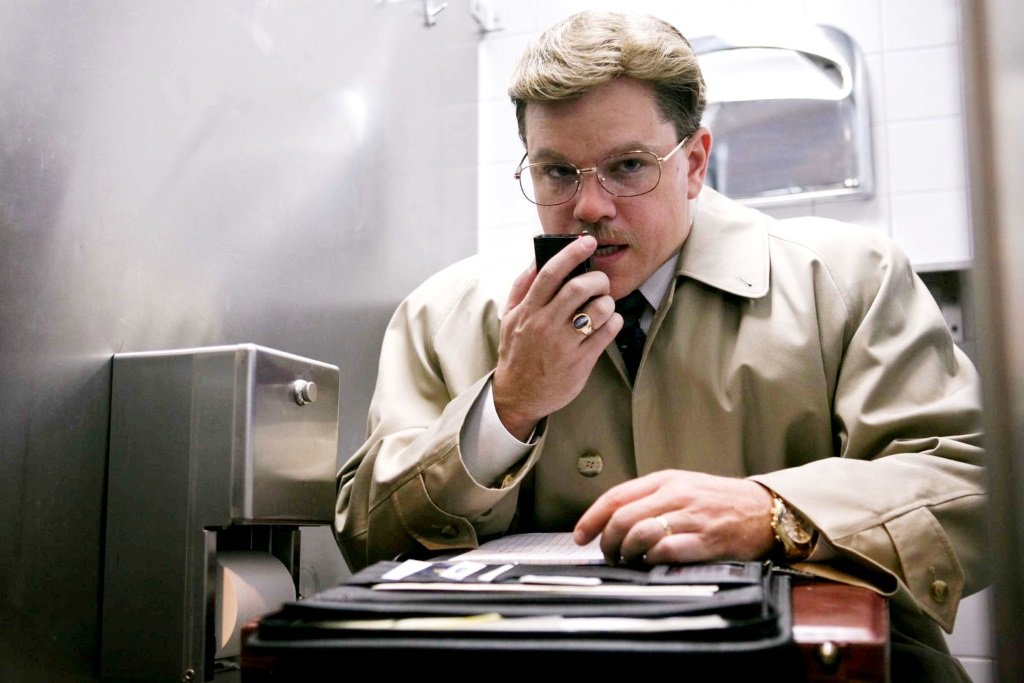 Biochemical engineer and corporate whistleblower Mark Whitacre might have been a national hero for his help in exposing international price fixing. Too bad he was also a compulsive liar and an embezzler caught up in delusions of grandeur and secret-agent fantasies. Though based on a true story, The Informant! (2009) is not The Insider but a light-fingered take on corporate conspiracy transformed into a jaunty satire by filmmaker Steven Soderbergh and screenwriter Scott Z. Burns.

Matt Damon is a constant churn of gee-whiz earnestness, righteous indignation, nervous exasperation, and self-aggrandizing swagger as Whitacre, a wannabe hero with a lovingly loyal wife (Melanie Lynskey), a magnificent house, and a blazingly successful career that could all be put at risk by his cooperation with the Feds. It’s a brilliant dance of charm and delusion delivered with an amiable enthusiasm and wavering resolve and accompanied by a running stream-of-consciousness narration of constant distraction, pinging all over the place as he struggles to keep his secrets.

As Soderberg reveals the chinks in his armor of altruism and service we come to realize he’s a compulsive liar. But what makes him so slippery and fascinating is how effortless and consistent he is. You can’t sort out the lies from the truth. They create a fantasy world of heroism and entitlement that Whitacre surely wants to believe and absolutely wants the rest of the world to understand on his terms.

It’s a mesmerizing performance in a dryly hysterical film and Soderbergh has a soft-spot for this deluded character. Sure he’s a crook, but his crimes are petty compared to his corporate bosses, and this film is an object lesson in social justice: it’s easier to prosecute one guy for stealing from a few people than it is to get the corporate masterminds behind international fraud totaling billions. Whitacre’s mistake, apparently, was thinking too small.

, iTunes, GooglePlay and/or other services. Availability may vary by service.
The Informant! [Blu-ray]

On Blu-ray and DVD from Warner Home Video with four deleted scenes (running about six minutes). Exclusive to the Blu-ray release is commentary by Steven Soderbergh and screenwriter Scott Z. Burns. Soderbergh is one of the better commentary track jockeys around, having talked not just over his films but been a guest on other film tracks and he brings that talent as a moderator to this discussion that ranges over all aspects of the film, from its inspirations (Burns initially heard the story told on the public radio show “This American Life”) to working with composer Marvin Hamlisch. Also includes a bonus digital copy of the film for portable media players.