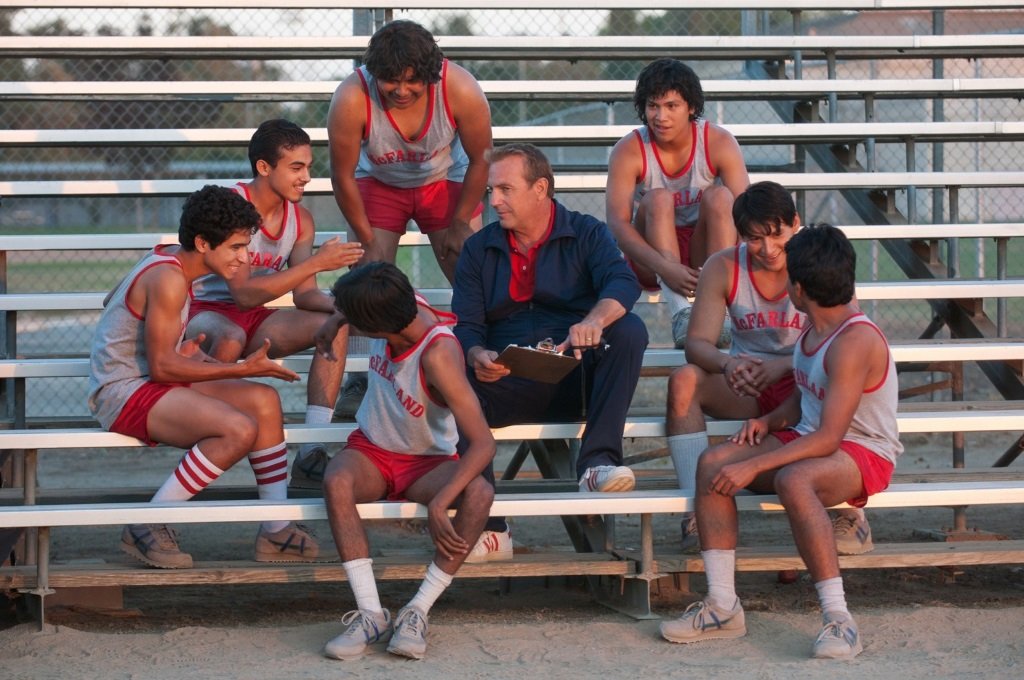 In McFarland, USA (2015), Kevin Costner is the hothead of a coach who lands in an impoverished California desert town and starts a cross country team with Mexican-American students who, until his arrival, had little hope of a future outside of working the fields.

Disney has really carved this genre out for itself: the true-life underdog sports story as cultural melting pot, complete with the Middle American white coach/scout/father figure whose preconceptions are overturned by scrappy kids who overcome every hurdle with heart and hard work. That guy was Jon Hamm in Million Dollar Arm and Josh Lucas in Glory Road. In McFarland, USA he’s Jim White, a high-school football coach whose temper has landed him in an assistant coach position at an underfunded school in a largely Mexican-American town in the California desert, and whose commitment to the players gets him booted from that job. The football team has no hope against better supported teams with bigger players but they have speed, so Coach White forms a cross-country team with a dubious squad that fits practice in between schoolwork and field work.

The story is familiar, stirring the usual ingredients around with a different set of cultural spices, and it ends up with a rousing triumph that is more satisfying because it’s true than because it’s in any way surprising and unexpected. But the setting is not something we generally see in mainstream movies. Coach White is a minority in this desert community, a flat, dusty stretch between Bakersfield and Fresno where agriculture is the only industry and Spanish is the primary language. “Are we in Mexico?,” his daughter asks, as they drive past sad little homes of cracked stucco and sun-parched dirt yards, and sure enough it looks like a Third World neighborhood within our borders.

And it’s a good role for Costner, who has history as both a sports movie veteran and underdog hero (Bull Durham, For Love of the Game, Tin Cup) and mentor / father figure to the likes of Jack Ryan and Superman himself. He’s the dedicated but flawed old white guy who steps out of comfort zone and reaches out to kids who never before entertained thoughts of college, let alone a future that didn’t revolved around picking crops. He gets to deliver the rousing pep talks and inspirational speeches with that plain-spoken, hard-earned-sincerity he does so well. He’s also the audience stand-in, a guy who has packed his prejudices along with his furniture and gets them mirrored right back at him by a glib coach from an affluent school during an early meet. It’s a nice moment that Costner handles with a mix of shame and self-reflection.

The roll-call of affable, arrogant, and resentful young men are likable if not particularly well developed and there’s even a chaste romance between the brooding start athlete (Carlos Pratts) and the coach’s teenage daughter (who gets a quinceañera before the film is over), which feels shoehorned in even by the standards of the genre. No matter, it’s still a rousing and even satisfying picture that reminds us of a world that we don’t often see on screen, and does so in a family friendly manner. It’s directed by Niki Caro and co-stars Maria Bello.

, iTunes, GooglePlay and/or other services. Availability may vary by service.
McFarland, USA [Blu-ray]

The Blu-ray and DVD includes the featurettes “McFarland Reflections,” featuring Costner with the real-life Coach Jim White, and “Inspiring McFarland, deleted and extended scenes, a music video and trailer. The Blu-ray features a Digital HD copy of the film (available through iTunes).