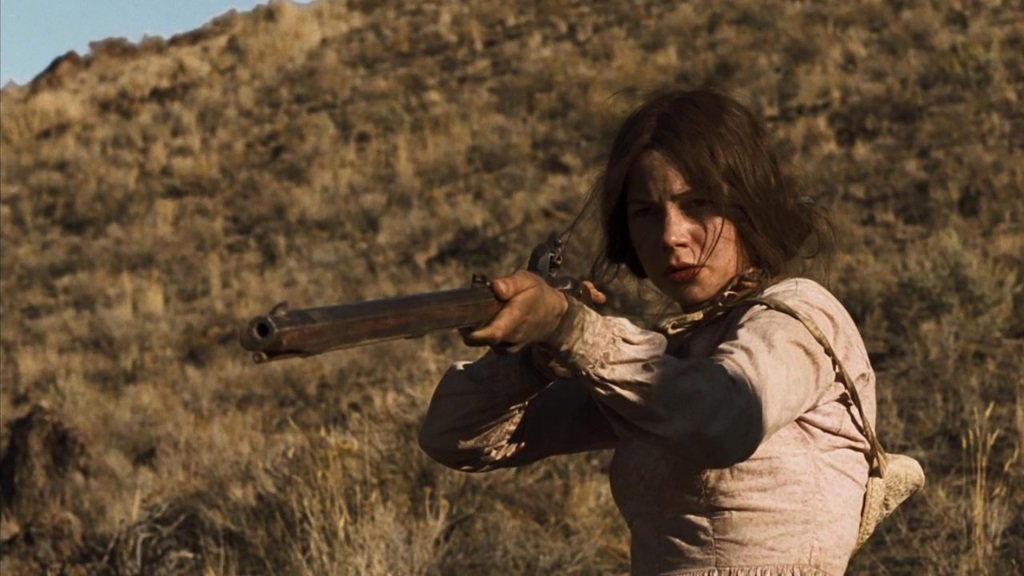 Kelly Reichardt’s Meek’s Cutoff (2010) opens without preamble. We are given a place and a year—”Oregon, 1845,” stitched into a piece of homespun embroidery—and then dropped in the high desert to observe three frontier families ford a river. They wordlessly, almost morosely, march across, then take the opportunity to fill canteens, wash and check the wagons before setting off again. These pilgrims in the desert are a long way from the Promised Land and their buckskin guide of a Moses, Stephen Meek (Bruce Greenwood, looking like a road show Buffalo Bill), talks a good story of frontier adventure but it’s clear to the three families of the tiny wagon train that his shortcut to the Willamette Valley has them lost in the desert.

Michelle Williams stars as Emily, the young wife of Soloman (Will Patton), an older man looking to start again in the new land, and while she is duly deferential in public, in private they share a healthy honesty in communication you suspect is absent in the other tents. One wife (Shirley Henderson) is pregnant and exhausted—they walk beside the wagons, not in them—and another (Zoe Kazan) on the verge of hysteria. But quietly. Always quietly.

This is one of the quietest American films you’ve ever seen. Apart from the tall tales spun by Meek, the dialogue is hushed and the audience strains to hear the discussions of the men debating their options. Much like the wives, who are left out of the discussions and stand apart, patiently picking up what they can. The soundtrack is creaking wagons, the wind through plains, the sounds of setting and breaking camp. Until The Indian, a lone figure shadowing them on their journey, is first spotted. He brings the music with him but it’s a lonely, alienated soundscape, mood rather than melody. Meek assumes he’s a threat, but not due to any native intelligence on his part. Forget the mountain man as frontier seer and survivalist savant. Meek can’t place the man’s tribe or language any more than he can find their trail. Emily’s defiant stand to protect The Indian (that’s his name, as far as any of the settlers are concerned; there’s certainly no communication between them) is as much practical as humanistic. If Meek can’t find water, then maybe this desert dweller can. If only out of self-preservation, as he’s tied—quite literally—to their fortunes.

Reichardt, who directed Williams (and, in a small role, Patton) in her previous film Wendy and Lucy, and screenwriter Jon Raymond draw the story from history (Stephen Meek was the brother of Joe Meek, a colorful entrepreneur whose place in Oregon history is the stuff of tall tales) and the texture from the journals kept by the women, which gives the film its defining perspective.

Through it all, Reichardt watches, observes, lets us feel the passing of time and the tension of waiting. As the families dump their heaviest belongings to lighten the load, we feel the desperation to survive in their hard looks watching their treasures fade into the distance. And as they keep marching forward, we understand that hope is no longer part of the equation. They simply haven’t any other choice. There’s the story of settling of the frontier in an image.

, iTunes, GooglePlay and/or other services. Availability may vary by service.
Meek’s Cutoff [Blu-ray]

Available on DVD and Blu-ray+DVD Combo Pack, both in Oscilloscope’s distinctive four-panel paperboard digipak. Both feature the nine-minute “The Making of Meek’s Cutoff,” an impressionistic look at the shoot sans narration or interviews. Which makes it quite the companion piece to the movie.