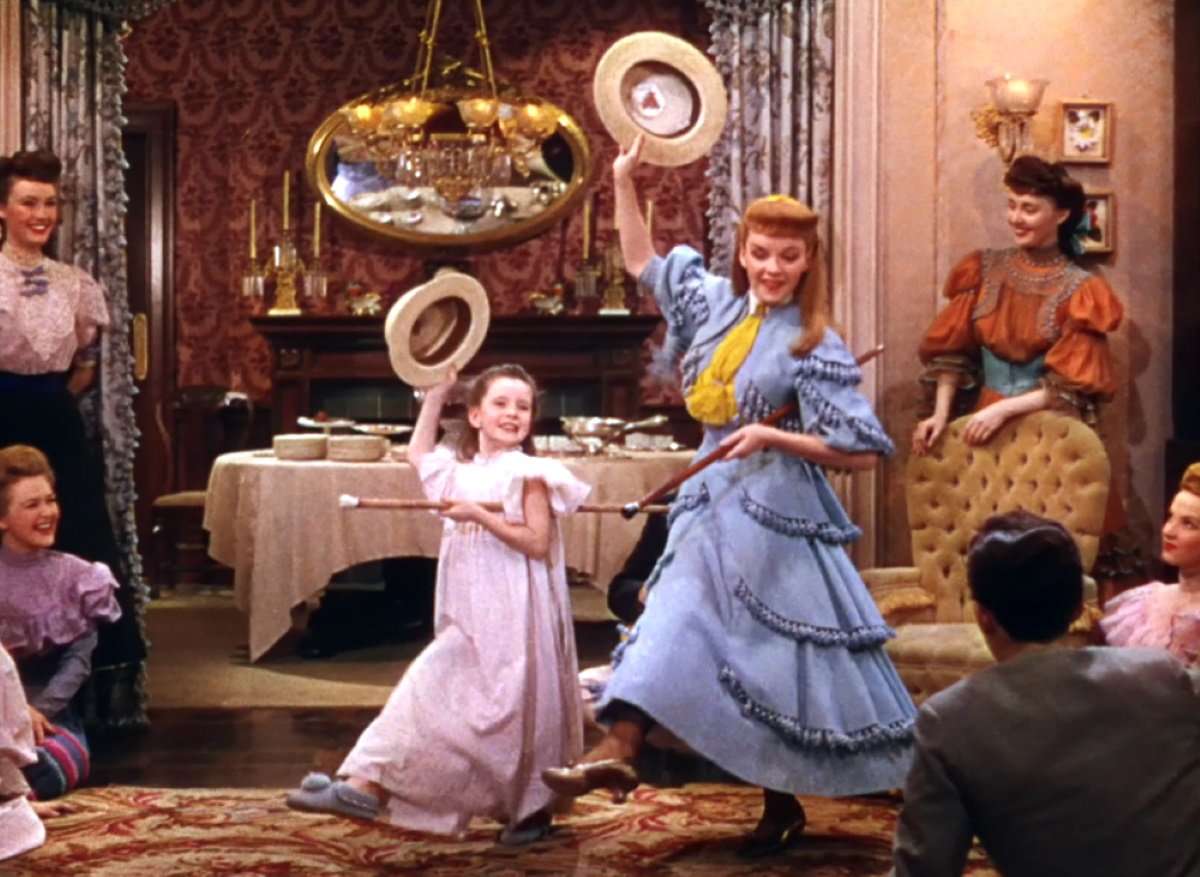 Meet Me in St. Louis (1944), Vincent Minelli’s first Technicolor film, is the ultimate in Hollywood Americana and a masterful musical that turned Judy Garland into a true leading lady.

A celebration of old fashioned values in song, dance, and family melodrama in turn-of-the-century St. Louis, the glowingly nostalgic tale follows a year in the life of a family as they reluctantly prepare to move to New York for Father’s (Leon Ames) new job, just as the excitement for the coming St. Louis World’s Fair sets the entire family to singing the title song.

It’s a film for all seasons and holidays, including one of the most bittersweet Christmas scenes of all time: little Margaret O’Brien commits symbolic parricide on an innocent snowman family after Judy Garland sings “Have Yourself a Merry Little Christmas.” O’Brien brings a feisty spunk to the family as the youngest sister and Lucille Bremer provides the maturity as the oldest, but the film belongs to Garland as the teenage daughter on the verge of womanhood, chastely romanced by the boy next door (Tom Drake). The scene where they extinguish the home’s gas lamps together and the hush of shadow covers them is one of the most beautiful and tender moments of understated intimacy in film history.

Other song highlights include “The Boy Next Door,” “You and I,” and “The Trolley Song.” Mary Astor is the mother, Marjorie Main the family housekeeper, Harry Davenport the wily grandpa, and June Lockhart, Hugh Marlowe, and Chill Wills co-star.

It was nominated for four Academy Awards, including George J. Folsey’s gorgeous color cinematography and for “The Trolley Song,” and Margaret O’Brien was given a special juvenile award for outstanding child actress of 1944.

It was added to the National Film Registry in 1994.

, iTunes, GooglePlay, Fandango, Vudu and/or other services. Availability may vary by service.
Meet Me in St. Louis [Blu-ray]

Meet Me In St Louis [DVD]

The film was previously available on a DVD two-disc special edition and the Blu-ray only carries most of the supplements. There’s commentary by Garland biographer John Fricke with Margaret O’Brien, screenwriter Irving Brecher, songwriter Hugh Martin and daughter of producer Arthur Freed, Barbara Freed-Saltzman and an introduction by Liza Minnelli (daughter of director Vincent Minnelli and star Judy Garland), plus a music-only audio track (without vocals).

“Meet Me in St. Louis: The Making of an American Classic” is a 30-minute featurette from 1994 narrated by Roddy McDowall, “Hollywood: The Dream Factory” a 50-minute history of MGM studios from the 1970s narrated by Dick Cavett and “Becoming Attractions: Judy Garland” a collection of movie trailers introduced by TCM host Robert Osbourne. Also features the rare 1966 “Meet Me in St. Louis” TV series pilot (with Shelley Fabares and Celeste Holm, plus a laugh track), the vintage shorts “Bubbles” (with the Three Gumm Sisters, including young Judy Garland) and “Skip To My Lou” (with songwriters Hugh Martin and Ralph Martin) and the 1946 “Lux Radio Theater Broadcast” adaptation of the movie (with stars Judy Garland, Margaret O’Brien, and Tom Drake reprising their screen roles). It’s collected in a Blu-ray Booklet (with stills, bios and song lyrics) with a bonus four-song CD sampler.