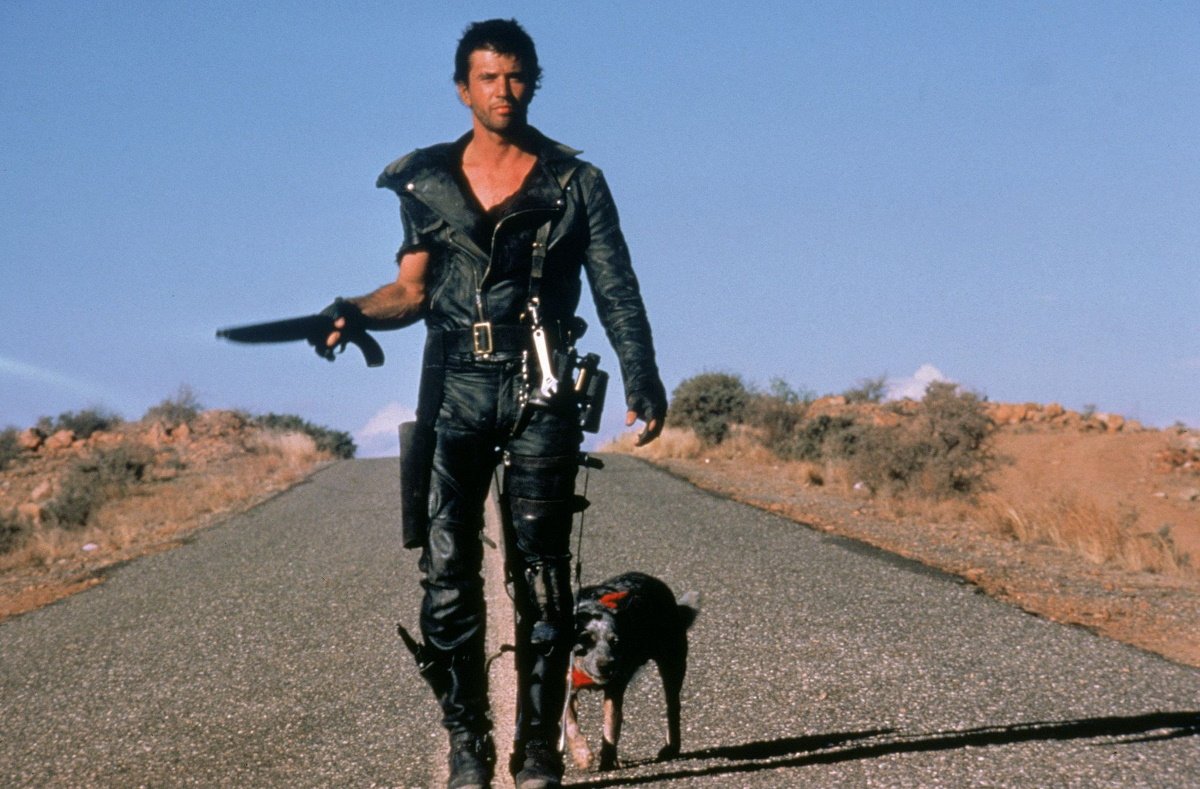 Mel Gibson is Max, the lone rider of the apocalypse, in The Road Warrior (1982), George Miller’s desert epic of end-of-the-world savagery, high octane action, and the dream of a better future sprouting in the desolate Australian outback.

This apocalypse isn’t nuclear Armageddon. It’s a world that has burned through its reserves of oil and gas, apparently all that has kept society from collapsing into barbarism. Speeding through the deserted highways cutting through the endless sands, Max is a survivor with a souped-up V8 and a loyal dog sidekick, all scar tissue and leather armor, competing with the other scavengers of the apocalypse for the last stores of gasoline. He exists only to keep moving.

Think of it as a spaghetti western on wheels, or a samurai adventure in the ashes of the end of the world, executed with comic book color and punk fashions. Gibson’s Max is another in a long line of iconic mercenary loners who becomes a reluctant hero for a community under siege from a roving gang of predators, and the simple story echoes with mythic dimensions. Max even teams up with a former adversary, the pilot (a goofy, grinning Bruce Spence) of a one-man gyrocopter who sees a future in the community, a feral child (Emil Minty) who sees a father figure in the silent driver.

It’s the direct sequel to Mad Max (1979), Miller’s low-fi revenge picture starring a baby-faced Gibson as a steely cop in a society on the edge of collapse, and was released in Australia and around the world under its original title Mad Max 2. The earlier film was dumped into drive-ins in the U.S. so when The Road Warrior arrived stateside in the summer of 1982, it felt new and different even as it drew from the past. Dropped in the midst of the special effects and big budget spectacles in American science fiction and horror films, this relatively low-budget production showed Hollywood what imagination, storytelling, and brilliant stunt work could accomplish.

It’s also a tremendous leap in scope, ambition, and execution from Mad Max. Miller carves out a defining production aesthetic of scavenged style and guerilla attitude to created untamed Australian outback, a vast desert of scavengers and gladiators in souped-up cars jousting for the next tank of gas. The stunt work is still impressive decades later—the Fast and Furious movies have nothing on the primal immediacy and screeching metal of these down-and-dirty vehicular stunts—and the climactic chase, essentially the third act of the film, is riveting. It’s a battle on the run as vehicles collide and crash, warriors leap from speeding trucks and motorcycles to fight atop giant rigs, and the losers are left broken and abandoned in the dust.

It’s a desolate, savage, unforgiving portrait of life after the collapse of civilization yet it still leaves us with hope for the future.

Michael Preston plays the leader of the community under siege and Max Phipps, Vernon Welles, Kjell Nilsson, and Virginia Hey (later to star in Farscape) costar.

It won five awards from the Australian Film Institute, including best direction, and the Los Angeles Film Critics Association gave it the best foreign film award.

It was followed by the sequel Mad Max: Beyond Thunderdome (1985) with Tina Turner and the prequel Mad Max: Fury Road (2015) with Tom Hardy in the role of Max.