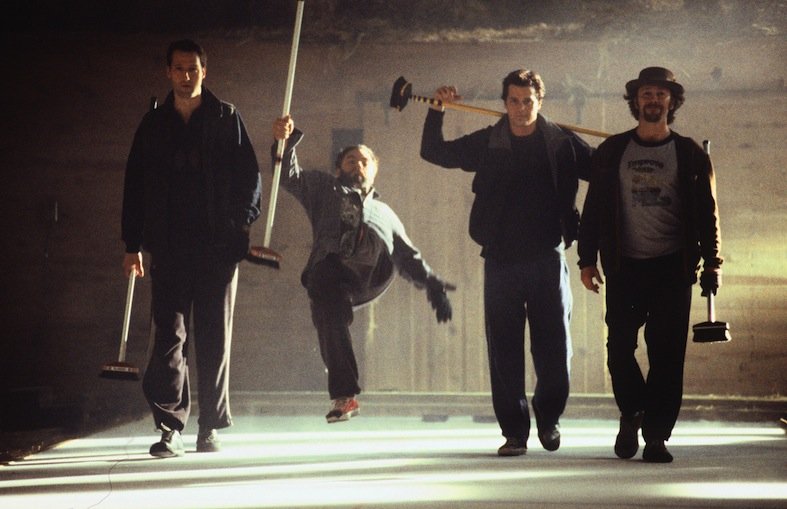 Men with Brooms (2002) – Think The Full Monty on ice: Canada’s most famous TV Mountie Paul Gross (Due South) puts tongue firmly in cheek as he applies the old underdog sports team formula to that great Northern obsession: curling. (You thought hockey was the national obsession? So did Canada.)

Gross directs, co-writes, produces and stars as the amiable team skip (that’s curling talk for captain) who reunites his estranged teammates to fulfill a dead man’s last request, win glory for their fictional hometown, and earn back their hibernating self-respect. On screen he’s amiable and personable and his low-key charm sets the tone of the film, but just to remind us how serious he takes all this, Gross the filmmaker opens the film with an anthem-like men’s chorus rendition of Canadian campfire chant “Land Of The Silver Birch” and punctuates the picture with inexplicable appearances of migrating beaver herds.

Molly Parker is his old drinking buddy with an unresolved crush and Leslie Nielsen, under a snow white beard and often glazed eyes, shakes off much (though not quite enough) of his goofball shtick to play his crotchety, self-medicating father.

Don’t expect any surprises along the way, just settle back for the deadpan delivery of a modest and entertaining little film with big stones and the biggest herd of beavers you’ve ever seen.

, iTunes, GooglePlay, Fandango, Vudu and/or other services. Availability may vary by service.
Men With Brooms [DVD]