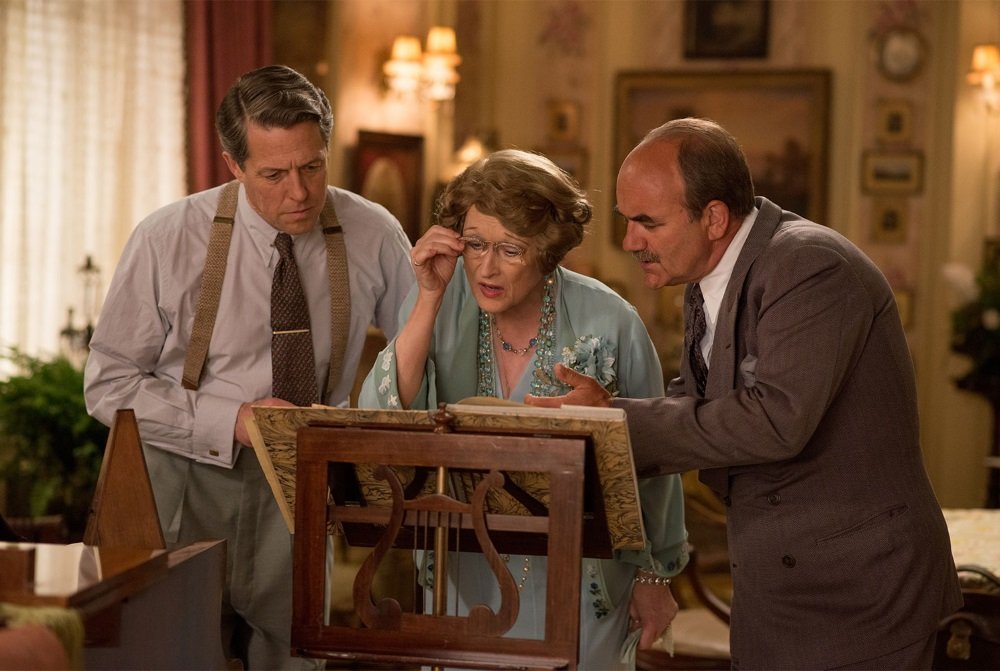 Florence Foster Jenkins (2016) may sound like a one-joke contrivance—a rich, generous, arts-loving heiress in 1940s New York City gives private recitals to a select group of high society insiders who never let on to the oblivious woman that she is quite possibly the worst singer to ever trod a stage—but it is both a true story and an unexpectedly tender, touching movie. And it’s quite funny to boot.

Meryl Streep, who is in fact a trained and talented vocalist, pulls off that most difficult of comic performances as Mrs. Jenkins. She glows with joy while her shrill tones are wretchedly off-key and at times off-the-charts while her husband St Clair (a warm and protective Hugh Grant) smiles in appreciation through her rehearsals.

Her new practice pianist Cosmé (Simon Helberg of The Big Bang Theory) is dumbstruck during his inaugural session with Florence and Helberg’s performance is superb. He’s like a silent movie comic, looking on gobsmacked then contorting himself to keep from betraying his reaction when he sees that no one else is the least bit fazed. You can imagine everything running through his head as he plays away: are they putting him on? Are they putting her on? Can they even tell she’s wildly untalented? Just what has he gotten himself into, and is having a steady job worth it?

It would be so easy to make Florence the butt of the joke, the victim of an elaborate prank perpetrated by a slice of New York society feeding her delusions, but her story borders on tragedy and St Clair sustains her illusions of vocal competence out of love. She’s a dizzy socialite in the public sphere but behind closed doors we see the tired, worn survivor of a disease that should have taken her long ago and prevents her from sleeping with her husband.

Stephen Frears was once the most provocative of Britain’s young filmmakers but he’s mellowed with age and I appreciate the compassion of his recent films. This is one of his most compassionate, a story that appears to ridicule its hapless heroine and puncture the pretensions of high society as it sneaks up on the viewer. Before we know it, we are just as invested in sustaining the illusion: conspirators in a plot to sustain the dreams of Mrs. Jenkins against the cold, hard light of judgment.

It was nominated for two Academy Awards, including best actress for Streep.

The disc supplements are limited to the Blu-ray edition: a Q&A with Meryl Streep conducted at the Director’s Guild Theater in New York, four short production featurettes, the 10-minute “Live at Carnegie Hall” look into the official venue archives, deleted scenes, and footage from the world premiere opening.