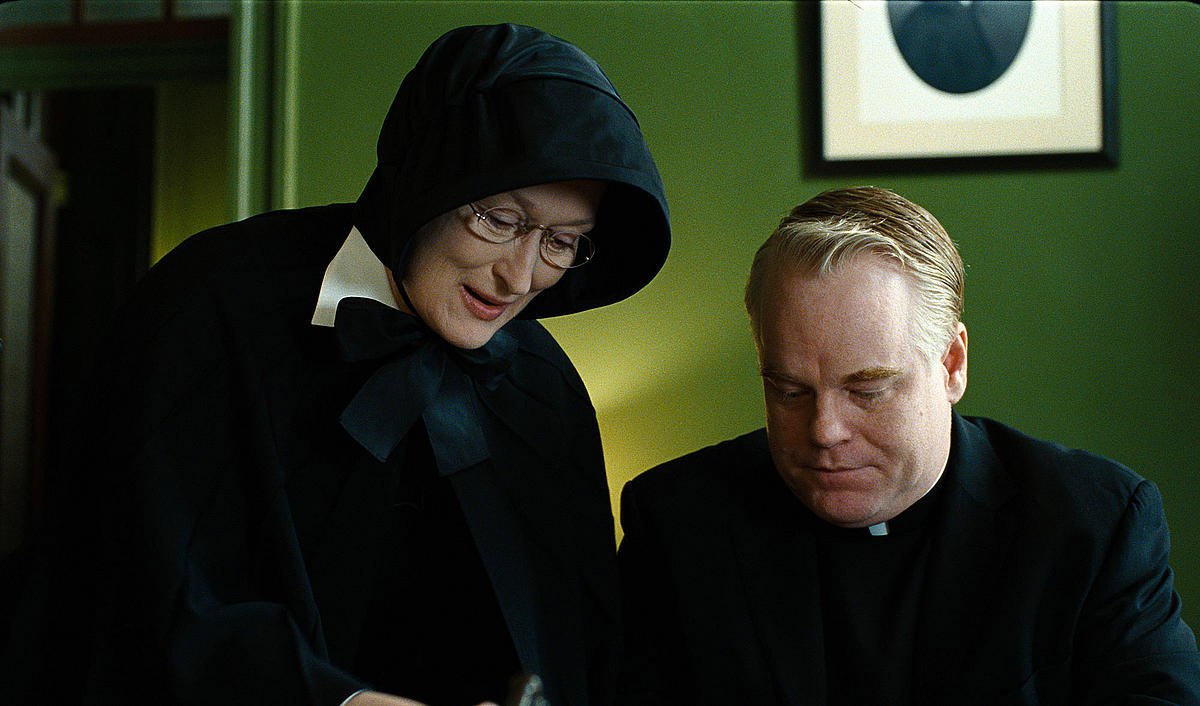 Take the title at face value: Doubt (2008), directed and adapted for the screen by playwright John Patrick Shanley, does not offer answers. Rather, it challenges us to understand our own instincts to believe in the absence of proof.

Flynn has extended his protection and support to the boy, but the imperious Sister Aloysius Beauvier (Meryl Streep), the authoritarian principal who fulfills every stereotype of the officious Catholic school who wraps the knuckles of distracted boys, suspects something more. Or is it that she just doesn’t like Flynn, whose new ways collide with her strict standards? “You don’t have any proof,” Father Flynn says to her when she vows to see him removed from the parish. “I have my certainty,” she replies. Belief without proof. Faith, in other words. She has no room for doubt.

We aren’t so privileged. Shanley keeps the “truth” off-screen and offers personality and ambiguity in its place. We like Father Flynn, a down-to-earth priest attempting to connect personally and directly with his congregation and spread faith through love and support, and are suspicious of Sister Aloysius, who wants to preserve a very old school church of hierarchy and authority. Flynn threatens her world of clear divisions and chains of authority, which she herself defies (even as she demands that her junior nuns follow it religiously, so to speak) for what she believes is the greater good, a certainty that is without proof. Yet Sister Aloysius is also alarmingly perceptive about the reality of the old boy’s club of priests and church officers who don’t put stock in the suspicions of nuns and look out for each other in the face of allegations. Their battle is resonantly framed within a palpable cultural context and vivid personal motivations.

The dynamic battle of wills with Streep and Hoffman offers a master class in dueling performances and Adams and Viola Davis (as the mother of the bullied student) provide intense support. All four were nominated for Oscars, as was Shanley’s provocative screenplay, and Streep won the leading actress award from the Screen Actor’s Guild

On Blu-ray and DVD from Lionsgate with supplements. Playwright, screenwriter and John Patrick Shanley delivers a reflective commentary track that begins as a memoir of growing up in the Bronx (and its influence on the story and setting) and eases into a reflection on the play and the film that came from the convergence of history and invention. The serious and smartly produced featurettes are among the best I’ve seen for new films. Shanley narrates and hosts the 19-minute “Doubt: From Stage to Screen,” personally interviews Meryl Streep, and shares his research on the lives of nuns in “The Sisters of Charity.” Entertainment Weekly writer Dave Karger interviews the four adult stars in the “The Cast of Doubt” and composer Howard Shore discusses “Scoring Doubt.”