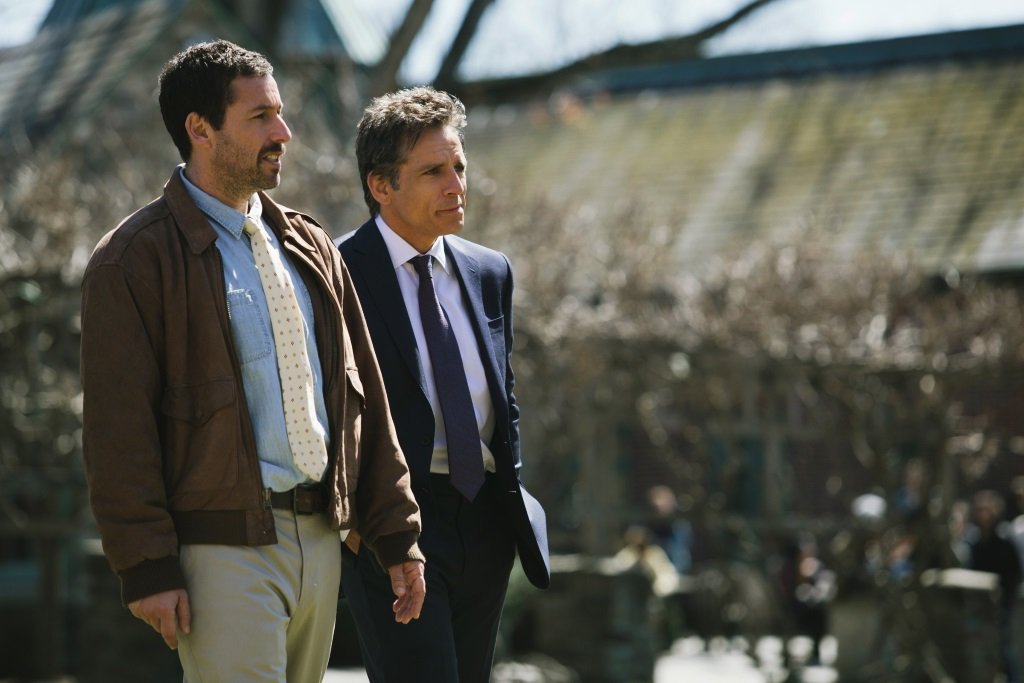 Noah Baumbach’s The Meyerowitz Stories (New and Selected) (2017, not rated), starring Adam Sandler and Ben Stiller as the estranged sons of sculptor and retired art professor Dustin Hoffman, Elizabeth Marvell as his withdrawn daughter, and Emma Thompson as Hoffman’s current wife, debuts on Netflix the same day it opens in select theaters.

“With this film, Mr. Baumbach has achieved a near-perfect balance between engagement and discomfort,” writes Glenn Kenny for The New York Times. “In The Squid and the Whale and Margot at the Wedding, something drove him to depict family squabbles with a candor that approached cruelty…. As boisterous and edgy as The Meyerowitz Stories gets, it is a more mellow film, and to my eyes and ears all the better for it.”

10 episodes now available. Queue it up!

And remember that Netflix also has Fincher’s superb Zodiac (2007, R), another true crime story about the hunt for a serial killer, this one before the FBI developed its psychological tools (reviewed on Stream On Demand here).

Amazon Prime’s new anthology horror series Lore, based on the popular podcast that investigates the real-life roots of horror legends, debuts quite appropriately on Friday 13th.

“Although much of Lore involves the paranormal, it is not meant to leave you with questions,” explains Robert Lloyd for Los Angeles Times. It “concerns ordinary people and the point where the limits of human knowledge give way to superstition and mythmaking…. And although it is comically overwrought at times… it is also plenty discomfiting.”

Baby Driver (2017, R) brings fresh stylistic energy and musical flair to the speed-demon crime picture. Young lead Ansel Elgort is outmatched by costars Kevin Spacey, Jon Hamm, Jamie Foxx, and Lily James but the car chases and stunts are a blast. Also on DVD and Blu-ray and at Redbox.

Nicole Kidman, Kirsten Dunst, and Colin Farrell star in Sofia Coppola’s remake of The Beguiled (2017, R), which won the Best Director award at Cannes. Also on DVD and Blu-ray.

The Babysitter (2017, not rated) is part of a satanic cult, which is trouble when she catches her charge (Judah Lewis) spying on her. Bella Thorne, Samara Weaving, Robbie Amell, and Leslie Bibb star in this Netflix original teen horror film directed by McG.

Kate Mara is Megan Leavey (2017, PG-13) in the true story of a misfit soldier in the K-9 unit whose bond with her IED-sniffing dog saved lives in Iraq and became national news back home.

Streaming TV: from Amazon India comes Inside Edge: Season 1 (with subtitles), a sports melodrama set in the high stakes world of professional cricket.

True stories: the award-winning City of Ghosts (2017, R) celebrates the citizen journalists of Raqqa who risked their lives to report on the occupation of ISIS.

Kid stuff: Amazon revives the seventies kids’ comedy series Sigmund and the Sea Monsters right down to the with goofy rubber costumes.

Sarah Silverman hosts the Hulu original talk/comedy series I Love You, America, where the comedienne travels the country to talk with folks who have a different point of view. New episodes debut on Thursday nights.

The original documentary Spielberg (2017, not rated) profiles the life and art of the influential American filmmaker.

In the run-up to Halloween, FilmStruck presents the 1940s horror films from producer Val Lewton, master of low-budget style and psychological horror, including the moody masterpieces Cat People (1942, not rated) and I Walked With a Zombie (1943, not rated), both directed by Jacques Tourneur.

More affirming is the classic Hollywood romantic drama History Is Made at Night (1937) with Jean Arthur and Charles Boyer (reviewed on Stream On Demand here).

New episodes of the recently-revived sci-fi comedy Red Dwarf streams exclusively in the U.S on BritBox within a day of their BBC showings.