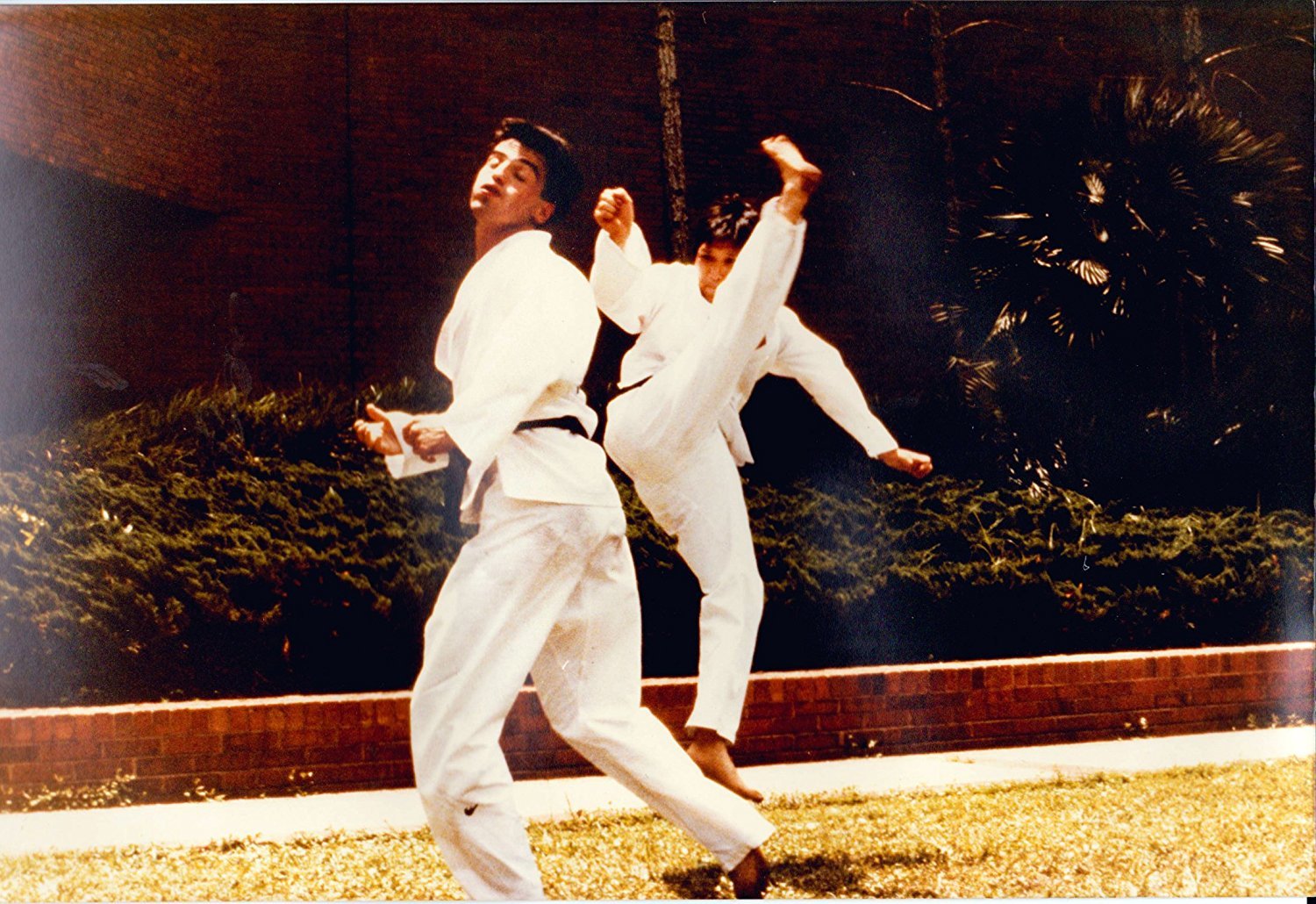 Another chapter in the cult canon of movies that are so bad that they become inadvertent comedies, Miami Connection (1988) is a gonzo B-movie from the eighties created by Y.K. Kim, a martial arts instructor and inspirational speaker who took his talents to the big screen despite a complete lack of screen charisma or acting talent.

Kim takes top billing as Mark, ostensibly the rhythm guitar player in a synth-rock band (his air-guitar stylings are apparently modeled on Archie cartoons) formed with a “family” of fellow orphans and Taekwondo black belts. Various complications throw them into conflict with a rival rock band and a gang of drug-dealing motorcycle Ninjas, who take time out from killing rival smugglers to ambush our heroes and kidnap their lead guitar player (Angelo Janotti). That’s serious business because he’s the only guy who can actually play an instrument in this group.

Kim plays comforting elder to his rainbow coalition of Taekwondo brothers (they all live together in the same suburban home, Monkees style) between brawls and breaking bricks with his hands and head, offering up most of the tired homilies in the script while the rest of the boys go through the motions of their own dramas.

The awkward direction and stilted-beyond-belief acting is broken up by the hilariously cheesy synth-rock numbers of Dragon Sound (their epic number “Against the Ninja” actually predicts the coming storyline: an example of musical foreshadowing?) and martial arts action scenes, which look downright competent next to the rest of the film.

Cast largely with martial arts instructors and students drafted into service, the performances are, shall we say, unconvincing. Some of them are inadvertently comic and the often improvised dialogue exchanges are often surreal. The characters are named, by the way, John, Jack, and Jim, and are joined by female singer Jane, who is sister to bad guy Jeff. Hard to tell if screenwriter/co-star Joseph Diamand had a sense of humor or was simply stuck for names.

The film was directed by Korean B-movie veteran Park Woo-sang (credited at Richard Park), whose final edit was apparently so bad that when producer / star Kim tried to sell the film, he was advised to simply “throw it away.” So Kim rewrote the script with Diamand, reshot scenes himself (helped by a “How to” book), and released the film himself in a handful of local Orlando theaters. Even the hometown audiences snubbed it and after a brief VHS release it disappeared, languishing in well-deserved obscurity until Austin’s Alamo Drafthouse found an orphaned 35mm print and resurrected the film as a midnight movie. They tracked down Kim and distributed the film in special engagements across the country. A cult movie was born.

Add to My List on MUBI or stream free on Hoopla, which is free through most public and college library systems.

Order it from Drafthouse Films

Both the Blu-ray and DVD editions from the Drafthouse Films home video line feature commentary by producer / co-writer / star Y.K. Kim and screenwriter / star Joseph Diamand, the 20-minute featurette “Friends Forever: The Making of Miami Connection” (which reunites all five members of the orphan family band!), deleted scenes (including the original ending), a 25th anniversary Dragon Sound reunion concert (with Kim and the boys still faking their musicianship while Angelo Janotti carries the performance), and two archival Y.K. Kim promotional videos from the eighties.