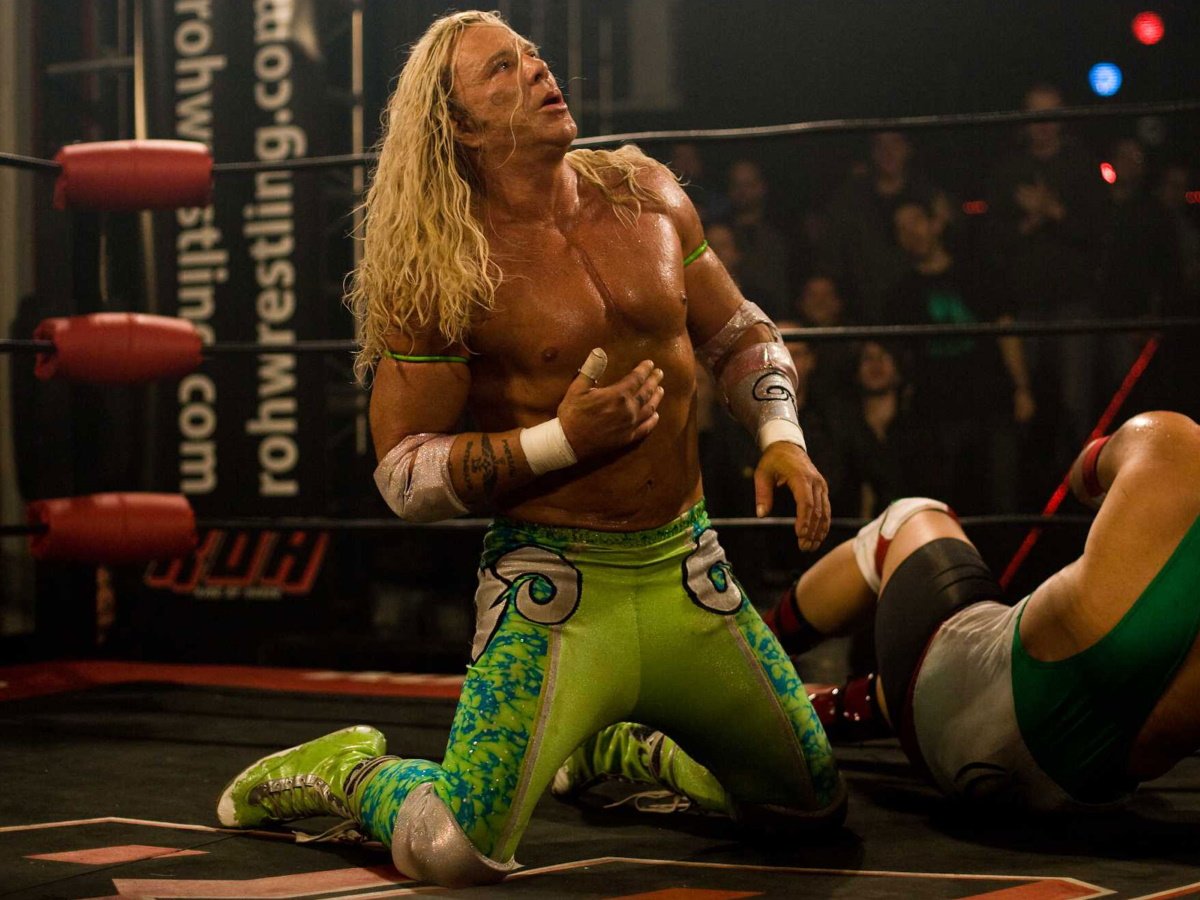 “Warm” and “human” are not two words you associate with Darren Aronofsky, but in The Wrestler (2009) he is both, thanks in large part to the heartbreakingly open and vulnerable performance from Mickey Rourke, the comeback story of 2008.

It’s been a long time coming for Rourke, who has been doing tremendous, unshowy work in American indies and oddball pictures for years, all in supporting roles and character parts. But it still makes a great story given the parallels to the film, which is about a once-famous, largely-forgotten, pummeled-into-scar-tissue pro wrestler whose glory days were twenty years ago.

Randy “The Ram” Robinson still lives in that past, at least as far as his taste in hair metal music goes, and pushes an increasingly broken body into the ring for regional cards in the show-biz hinterlands of rural New Jersey for a few hundred dollars a night. At least until a heart attack forces retirement on him and sends him to try to connect with the aging stripper he loves (Marisa Tomei, equally vulnerable but more wary) and reconnect with the daughter he all but abandoned (Evan Rachel Wood).

Aronofsky gives his blue collar world of trailer parks and strip clubs an understated authenticity and Rourke makes The Ram a flesh and blood character of natural generosity who just needs to be loved and can only find it in front of the crowd. It grabs for the heart and it squeezes, but with a calloused, knocked-about brand of sentimentality.

Also on Blu-ray and DVD and on SVOD through Amazon Video, iTunes, GooglePlay, Fandango, Vudu and/or other services. Availability may vary by service.
The Wrestler [Blu-ray]
The Wrestler [DVD]

The Blu-ray and DVD feature a music video for Bruce Springsteen’s theme song (which was unaccountably not nominated for an Oscar) and the 42-minute “Within the Ring,” a superior behind-the-scenes documentary directed with a rough-around-the-edge sensibility befitting both the film and the culture of its characters. It’s also a very egalitarian production, spreading the coverage between the stars, the supporting cast, the wrestling community and key members of the production staff.