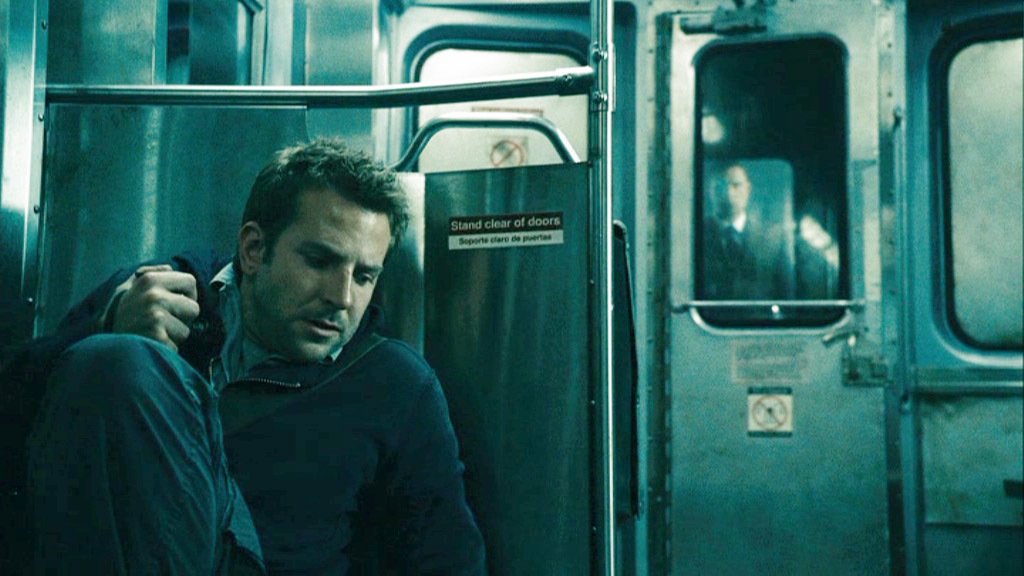 Curiosity is a killer in The Midnight Meat Train (2008), adapted from the short story by Clive Barker (one of the first he wrote) and directed by Japanese style-bomber Ryuhei Kitamura in his American feature debut.

Leon (Bradley Cooper), a street photographer who chases police calls for a living but prefers to document the underbelly of urban life (“I want to capture the heart of the city,” he explains to coolly powerful art world maven Brooke Shields), becomes obsessed with The Butcher, a silent, imposing slab of a man played with impassive focus by Vinnie Jones. This enigmatic, unspeaking figure silently boards the subway every night, right before more New Yorkers go missing. Leon shadows his movements from home (a gloomy hotel) to work (a commercial slaughterhouse hidden in a dinghy alley) to his nightly nocturnal rides on the subway. His waitress girlfriend Maya (Leslie Bibb) is disturbed by his obsession, which takes root in his mind like an infection. Or maybe it’s a kind of vaccine. After surviving one run-in at the slaughterhouse, Leon follows the Butcher on a midnight ride and catches him in the act on a subway train—bludgeoning the passengers of a late-night subway ride, prepping the carcasses like slaughtered cattle, and hanging them like sides of beef—and is rewarded with a rune carved in his chest. A warning? Or part of a transformation? (The ordeal has already given this once-vegan a taste for beef. Cooked rare.)

The Midnight Meat Train is a gnarly little horror that delivers the grotesque spectacle without the usual brand of sadism. The Butcher kills his victims quickly and efficiently by design (a few put up a fight and take longer), dispatching most with a single blow from a steel hammer. Neither homicidal maniac nor bloodthirsty ghoul, he’s an ominous golem who patiently and deliberately stakes out his space in the chaos of activity around him, a man on a mission that he executes without pleasure or remorse.

Cult director Kitamura’s Japanese films (Versus, Azumi, Godzilla: Final Wars) are more visually inventive than narratively involving. For all the visual tricks and show-off set pieces of murder, mayhem and butcher battles, The Midnight Meat Train is downright disciplined for Kitamura. The above-ground portion of the film is bathed in the 20-watt dim and grim urban depression of Seven—there’s not a ray of sunshine to break through the gloom even in daylight—while the subterranean world is cast in the cadaverous, pale blue glow of florescent lights.

Faced with a series of murders in the confines of a subway car, Kitamura goes for stylistic gymnastics (one murder is viewed from the victim’s lurching POV as he batters her skull until it flies off, rolls down the aisle and stares back at its dislocated body—and that’s not even the end of his tricks for this shot) and shock and awe effects. Most are startling in their abruptness, some go for blood-soaked gore (who washes these cars down at night, anyway?), and at least one borders on cartoonish overkill: in a fanish tribute to The Evil Dead films, an animated eyeball pops out of victim Ted Raimi’s head and into the camera, where it “bounces” off the lens. Back above ground, on a reconnaissance mission in the Butcher’s apartment, Kitamura sends the camera floating above the floor plan in his best Brian DePalma quote.

But that’s all flourish. The story is in the workaday attitude of the Butcher: his practiced routine, his meticulous attention, his dispassionate relationship to the victims, who are literally nothing more than meat to him. It’s meat that gets his respectful attention and meat that lies at the center of the story of both the Butcher and the film, which turns subway trains into cattle cars and slaughterhouses and sends them to the end of the line, both figuratively and literally. The sexy, playful relationship between Leon and Maya is the only spark in this dusky world and Leon’s obsession with the Butcher, and his increasing contact with the raw meat of his horror, smothers that spark. You could say fate switches Leon’s tracks and sends him on a whole new destination.

The Midnight Meat Train is not particularly scary or suspenseful, but it’s remarkably effective and, when it finally arrives at the end of the line, admirably simple. There’s a pitiless order to Barker’s universe and Kitamura gets the dispassionate balance between good and evil through sacrifice (in all senses of the term) and service. As in Lovecraft’s universe, the truth doesn’t set you free. It simply dooms you to a new level of horror.

, iTunes, Google Play and/or other services. Availability may vary by service.
The Midnight Meat Train [Blu-ray]

The film was released theatrically with an R rating and a 98-minute running time. The DVD presents the unrated director’s cut, which runs just a couple of minutes longer. Director Ryuhei Kitamura and author/executive producer Clive Barker provide a lively commentary track. Barker has a lot to say about horror stories and movies and enjoys talking to Kitamura (who speaks accented but fluent English) about his visual ideas and the cuts he made to get the original R rating. Barker talks more about his work in the 14-minute featurette “Clive Barker: The Man Behind the Myth” and the Ted Raimi eyeball scene gets deconstructed in “Anatomy of a Murder Scene.”