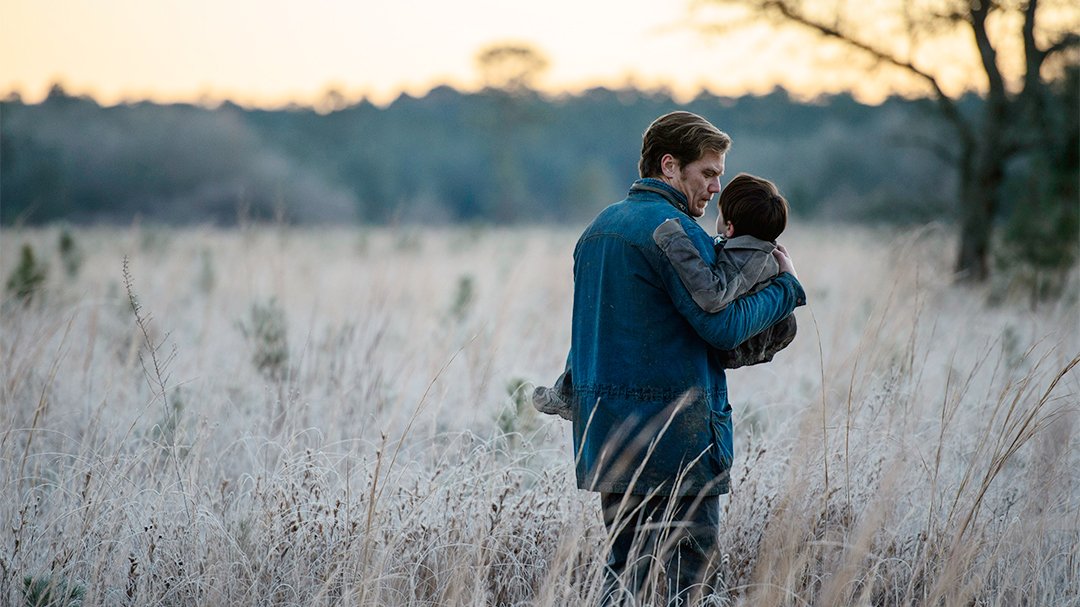 Midnight Special (2016) begins in the dark, literally and figuratively.

Two men in an anonymous motel room keep the shades drawn awaiting the cover of night. There’s a boy wearing goggles and reading comic books with a flashlight under the covers. It may be part of the whole covert thing or it may just be the innocent playfulness of the child. The men are alert like soldiers but the boy is calm and unafraid. Roy (Michael Shannon), the father of the boy, Alton (Jaeden Lieberher), speaks to him calmly but directly. He’s trying to protect him from the danger of the situation but Alton knows and understands all too well. He’s just as concerned for his father. The other man, Lucas (Joel Edgerton), is a friend with the skills of a military warrior and the loyalty of a soldier bonded under fire. Roy wraps Alton in a blanket and they drive off, headlights doused and night goggles on as they speed down a country highway.

Jeff Nichols, the writer and director, keeps that sense of mystery throughout Midnight Special, always raising more questions with each answer. Alton has certain powers; his eyes periodically glow and he spontaneously channels voices (the way Shannon is unfazed by what seems spooky to us is not indifference but understanding and maybe even reassurance; this is one particular quirk that basically confirms that Alton is still on the same wavelength).

A religious cult reveres him as a prophet. The government wants to understand (and, we assume, harness for their own use) his abilities. Roy simply wants to protect his boy and deliver him to his destiny. Not that Roy knows what that is but he’s pretty sure it doesn’t involve the cult or the NSA. Alton is drawn to particular coordinates and Roy, who has too long acquiesced to the cult’s leader (Sam Shepard, playing both God’s servant and self-serving leader), puts his faith in his son’s belief and devotes his life to reuniting Alton with his mother (a fragile and vulnerable Kirsten Dunst) and protecting him from everyone else at all costs.

It is unconditional love taken to the furthest expression. Michael Shannon, with his heavy brows and glowering eyes and big, boney, intimidating stockiness, is constantly cast in psychotic, mentally unbalanced, megalomaniac, or simply villainous roles . Jeff Nichols has consistently played against expectations. This is their fourth film together and it plays in part like a companion piece to Take Shelter with Shannon once again the father who will do anything to protect his family. His paternal, protective side comes out with an intensity that can be unnerving but is ultimately pure and selfless.

It’s also a gripping, well-tooled thriller with echoes of such race-to-escape science fiction classics as E.T., Close Encounters, and Starman, and the mystery and unease of an American conspiracy thriller of the seventies. And while most of the menace is underplayed and the powers more a matter of suggestion than show-and-tell explanation, the one special effects showpiece is so startling and sharp that it raises the stakes while unleashing new questions… once we catch our breath. There are times that the limitations of Nichols’ resources bump up against the scope and ambition of his vision—it’s his biggest budget to date but, at $18 million, a fraction of the superhero films it calls out, and sometimes it shows in minimalist imagery—but ultimately it is the small scale and the intimacy of scenes that makes Midnight Special so special.

Free on Hoopla, which is available through most public and college library systems.

The Blu-ray and DVD feature the 5-minute featurette “The Unseen World” with Jeff Nichols and producer Sarah Green and “Origins,” a collection of segments exploring five individual characters with the cast and crew (runs just over 12 minutes all together). The Blu-ray also features an Ultraviolet Digital HD copy of the film.