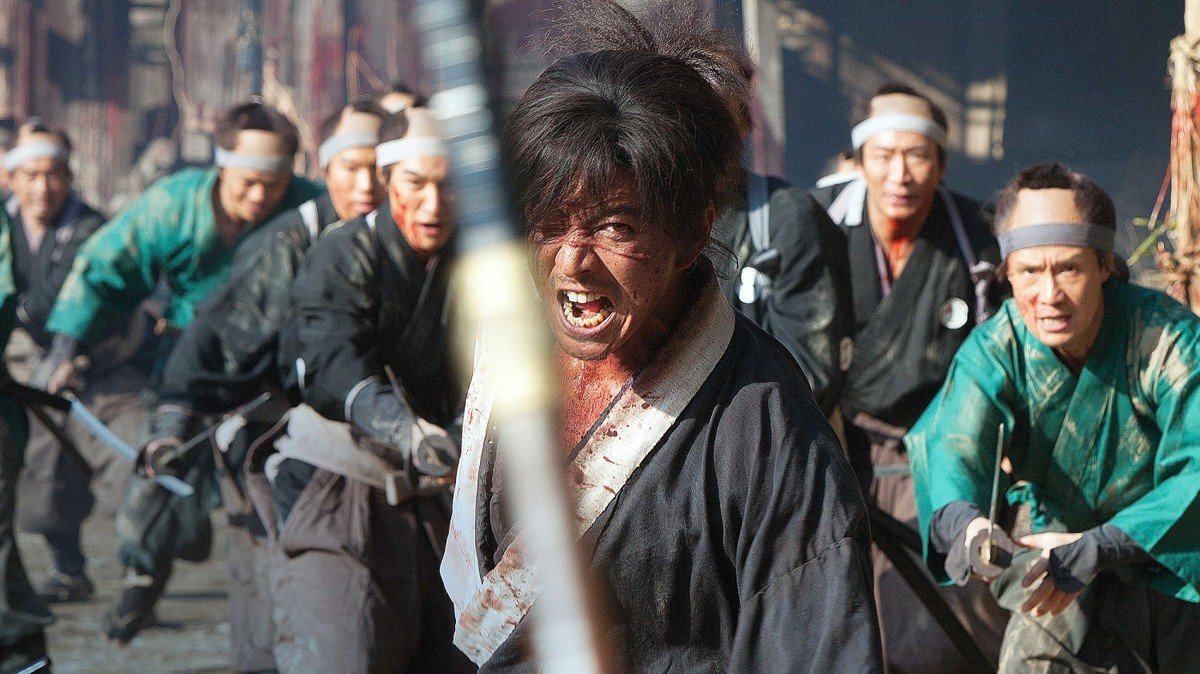 Japanese filmmaker Miike Takashi made his reputation directing offbeat crime films with wild twists, energetic momentum, creative imagery, and often extreme acts of violence, cranking out as many as eight films in a single year at his most prolific, but his filmography is much more diverse. He’s slowed down in recent years as his productions became bigger and his attention more focused, but he’s still one of the most prolific filmmakers in the world and Blade of the Immortal (Japan, 2017), a sprawling samurai adventure based on a long-running manga by Hiroaki Samura, is billed as his 100th film.

Japanese TV star Takuya Kimura plays the sword-wielding anti-hero Manji, an assassin cursed with immortality thanks to magical bloodworms that heal wounds and even reattach severed limbs. After a black-and-white prologue that sketches the tragic backstory (including his failure to save his little sister), he becomes bodyguard to a teenage girl (Hana Sugisaki) who us on a mission of vengeance against the men who slaughtered her family, a band of rogue fighters led by an androgynous madman (Sôta Fukushi) wiping out all rival martial arts schools.

It’s a set-up for scene after gory scene of swordplay as he mows through armies of anonymous swordsmen and engages in singular combat with particularly gifted enemies, and Miike delivers flying limbs, spraying blood, and fields of corpses with flamboyant style and a mordant sense of humor. The excess of the action becomes part of the point: this revenge leaves an epic body count. Filled with operatic action and flamboyant violence, this splashy film should please action and samurai movie fans.

In Japanese with English subtitles

Add to My Stuff on Hulu or to My List on MUBI or stream free on Kanopy, which is available through most public and college library systems.

, iTunes, GooglePlay and/or other services. Availability may vary by service.
Blade of the Immortal [Blu-ray]

Blade of the Immortal [DVD]

The Blu-ray and DVD from Magnolia presents the film with Japanese and English dubbed soundtracks and optional English and Spanish subtitles, with the featurettes “Manji vs. 300” on the shooting of the two big battle scenes, a 56-minute collection of “Cast Interviews,” and a 28-minute featurette that profiles star Takuya Kimura on the set (all in Japanese with subtitles).