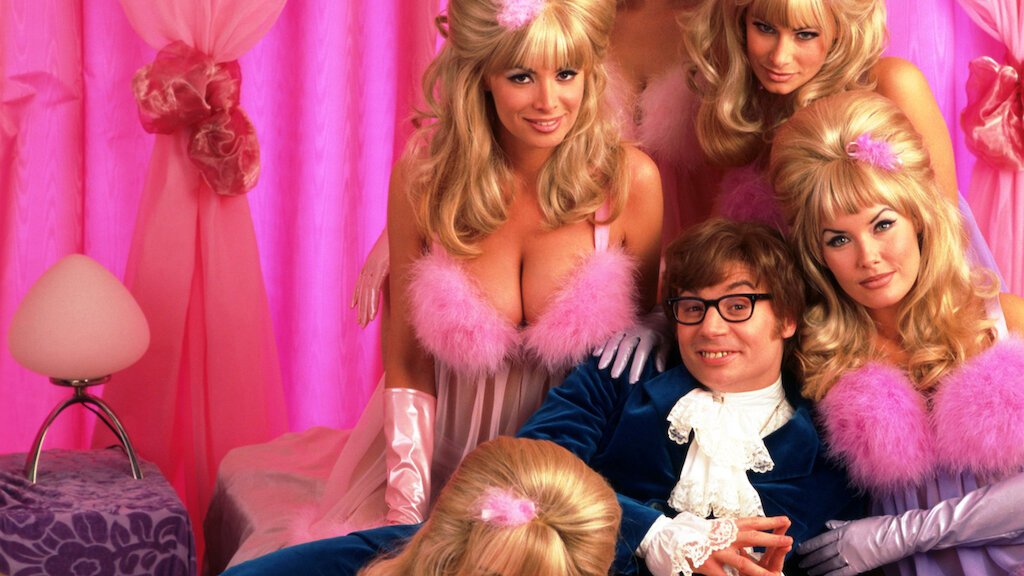 Austin Powers: International Man of Mystery (1997), Mike Meyers’ parody of classic James Bond movies and various 1960s copycats like Matt Helm and Derek Flint, careens from gag to gag with such pop art color and energy that you don’t really mind that it misses the target so often.

Meyers writes and stars as the shagadelic Powers, a super spy from swinging sixties London, thawed out from frozen storage to save the world in his cravat and crushed velvet jacket, like a time capsule unleashed on the nineties. The reason for his reinstatement? Super villain Dr. Evil, a bald megalomaniac spoof of James Bond nemesis Ernst Blofeld, has also returned after a self-imposed three-decade absence. This out-of-touch evil genius is also played by Meyers, with a self-satisfied smirk and an unplaceable growl of an accent, and his plot of world domination is slowed only when fatherhood is thrust upon him.

A lot has changed in thirty years, but not these guys. Powers is a groovy fashion plate with crooked teeth, chauvinistic tendencies, and a randy sex drive that never idles and Meyers plays both Powers and Dr. Evil as cartoons, which is as it should be. His constant attempts to seduce his modern partner (Elizabeth Hurley), who happens to be the daughter of his now-retired former partner (Mimi Rogers), is only funny as a man-child out of time. And as for Dr. Evil, his self-absorbed antics run up against modern parenting when he is forced to enter counselling with his Gen-X son Scott (Seth Green), who is resentful for Dad abandoning him all these years.

Michael York plays straight man the Meyers as the British spymaster who breaks Powers out of deep freeze and Robert Wagner is Dr. Evil’s loyal Number 2, diversifying the Evil corporate in the boss’ absence. The rest of the film is filled with sixties references (from A Hard Day’s Night to Blow Up to Laugh-In), a slew of adolescent PG-13 sexual gags and puns, and a terrific soundtrack of iconic songs and groovy contemporary tunes.

The feature debut of Jay Roach is silly and tacky and proud of it. There’s not much visual flamboyance or cinematic imagination and the script sometimes plays like a Saturday Night Live sketch carried on too long but Roach shares Meyers’ sense of whimsy and keeps the energy up.

Austin Powers: International Man of Mystery was not an immediate success. Though a financial success, it was something of a financial disappointment during its initial theatrical run. It was on home video that it really took off, finding a whole new audiences that turned it into a world-of-mouth hit. Two sequels followed, both of which were more successful in theaters but not quite as clever as the original.

Note that Ming Tea, the fictional sixties band glimpsed in snippets throughout the film, was created by Myers with Susanna Hoffs and Matthew Sweet after his Saturday Night Live tenure and was where Myers first used the name Austin Powers. Yeah, baby, yeah!