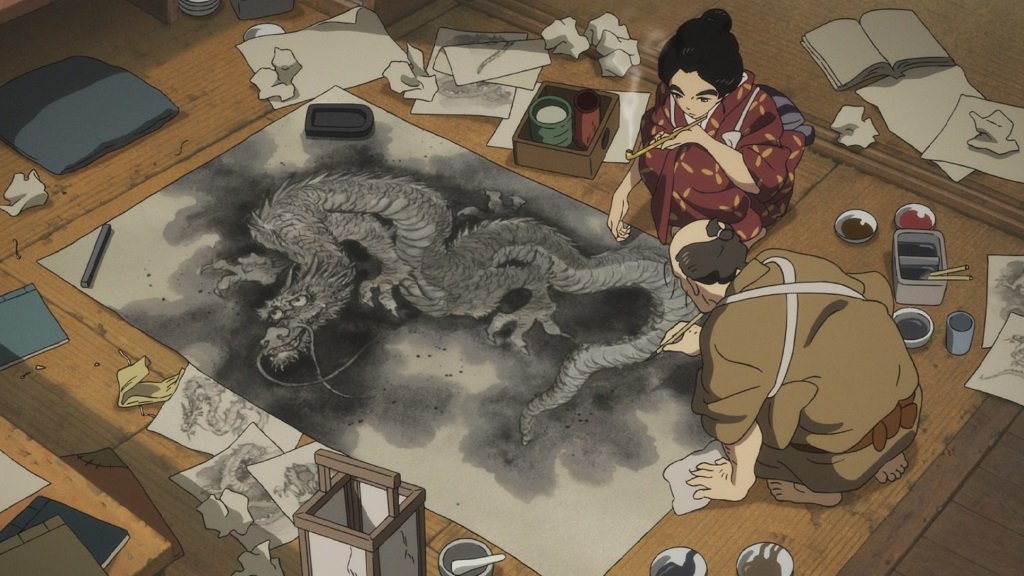 Miss Hokusai (Japan, 2015) is actually an artist from early 19th century Japan by the name of O-Ei Katsushika, a young woman who trained under her father, the legendary Japanese painter Hokusai Katsushika.

Based on the biographical manga “Sarusuberi” by Hinako Sugiura, this is an episodic animated feature, like a collection of memories and vignettes that illustrate the kind of man Hokusai was—a dedicated and brilliant painter but a neglectful and emotionally distant father—as seen through her eyes. Hokusai was famed for his paintings of bridges and ships and of dragons and other mythical beings and the animators suggests his work and style in their recreations. But it is also the story of the daughter who works in the shadow of her father and even paints commissions that are sold under his name while looking after him, a man so devoted to art that he fails to look after himself or manage his responsibilities.

It’s directed by Keiichi Hara for Studio I.G., a production house that made the original Ghost in the Shell, but unlike that landmark cyberthriller, this is a quiet film with a sense of serenity interspersed with scenes of fantasy and wonder—dreams, stories, and moments of magic that may or may not be all in the creative imagination of the characters—and images of daily life of Japan in 1814. In Japan, animation is used to explore stories and subjects that might seem to western audiences better suited to live action, including character dramas and biographies. Miss Hokusai uses animation to create a sense of stillness and grace in its images, to set a mood. And as this is about art and creation, it uses animation to explore both the artistic process and creative imagination.

, iTunes, GooglePlay and/or other services. Availability may vary by service.
Miss Hokusai [Blu-ray]

The Blu-ray and DVD from Universal features both English and original Japanese soundtracks with subtitles and a featurette (in Japanese with subtitles).