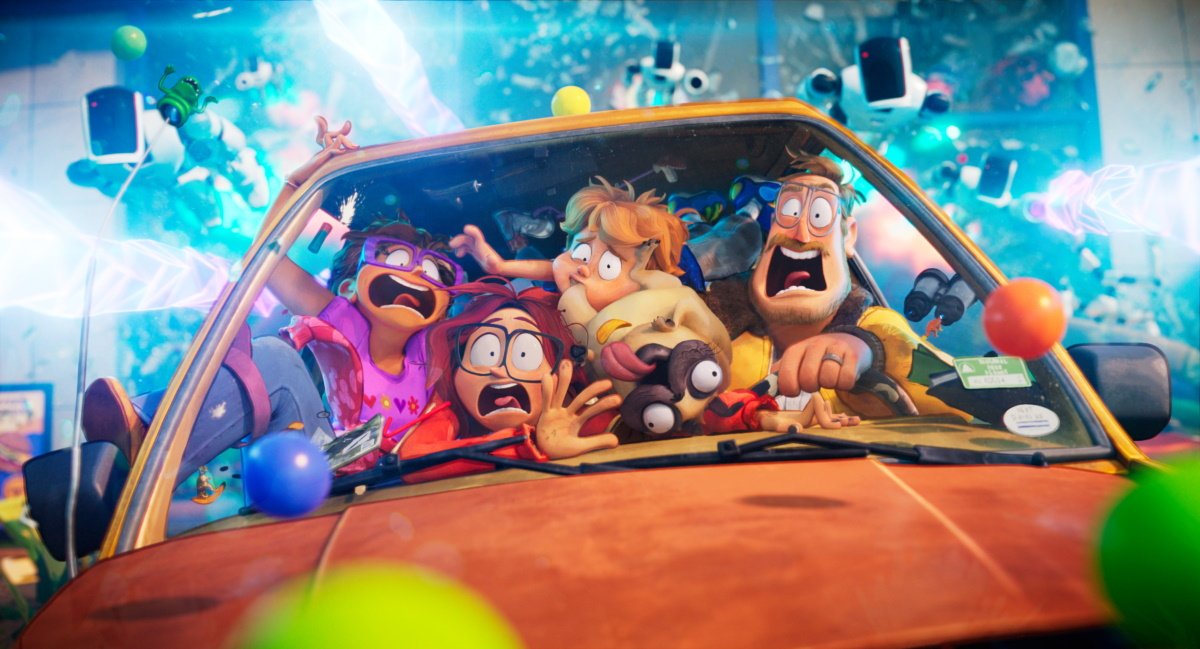 A family road trip takes an unexpected detour when they face a robot invasion from outer space in “The Mitchells vs. The Machines” (2021, PG), an animated adventure comedy featuring the voices of Danny McBride, Abbi Jacobson, Maya Rudolph, and Fred Armisen. The lively, vibrant, family-friendly feature is produced by “The Lego Movie” creators Phil Lord and Chris Miller and directed by Mike Rianda and Jeff Rowe, writers of the offbeat animated series “Gravity Falls.” (Netflix)

“Tom Clancy’s Without Remorse” (2021, R) stars Michael B. Jordan as John Kelly, an elite Navy SEAL who goes rogue after his pregnant wife is murdered in retaliation for a past mission. As he searches for the men behind the attack, he uncovers a conspiracy. Jodie Turner-Smith, Jamie Bell, and Guy Pearce costar and Italian filmmaker Stefano Sollima (“Sicario: Day of the Soldado”) directs the action thriller, which was originally produced for theaters but now debuts directly to streaming. It’s a frustratingly simplistic movie for a conspiracy thriller but the action is top notch. (Amazon Prime)

Amanda Seyfried stars in “Things Heard and Seen” (2021, TV-MA) as a Manhattan woman who moves to a remote home in the Hudson Valley with her husband (James Norton) and confronts a sinister darkness in their home as well as in her marriage. Natalia Dyer costars in the mix of supernatural and psychological thriller, adapted from the Elizabeth Brundage novel by filmmakers Robert Pulcini and Shari Springer Berman. (Netflix).

The documentary “Lucy the Human Chimp” (2021, TV-14) uses rare archival footage to explore the journey of a female chimpanzee raised as human in a domestic environment and the graduate student (Janis Carter) who helped her learn to live in the wild as an adult. It’s a true story of good intentions, inadvertent damage, and the emotional lives of our nonhuman neighbors. (HBO Max)

“Bäckström: Season 1” (Sweden, with subtitles), based on the Swedish crime novels of Leif GW Persson, stars Kjell Bergqvist as an arrogant, unscrupulous, brilliant detective who faces a case that confounds even him. All six episodes available. (Acorn TV)

In the fourth season of the award-winning “The Handmaid’s Tale: Season 4” (TV-MA), June (Elisabeth Moss) strikes back against the oppressive regime as a fierce rebel leader. Three episodes available, new episodes each Tuesday. (Hulu)

A small-town farmer (Christopher Walken) takes on one of the largest agricultural and food manufacturing corporations in “Percy vs Goliath” (2021, PG-13), a drama based on a true story, costarring Zach Braff and Christina Ricci. Available same day as theaters. Also new:

International passport: a man trying to restart his life after an accidental killing becomes the focus of another death in the limited series crime thriller “The Innocent” (Spain, TV-MA, with subtitles). Also new:

“The Commune” (Denmark, 2017, not rated, with subtitles), the story of an experiment in communal living in 1970s Denmark, is from director Thomas Vinterberg, whose new film “Another Round” won the foreign language Oscar.

“The Warlords” (China, 2010, R with subtitles) is a sweeping historical action drama with Jet Li, Andy Lau, and Takeshi Kaneshiro.

“Arrival” (2016, PG-13), starring Amy Adams as a linguist making first contact with an alien race with no spoken language, is both a brainy science fiction drama and a touching human story. (Amazon Prime and Hulu)

And just in you need to catch up with it, you can stream “The 93rd Oscars Special” (TV-PG).

“Marvel Studios: Assembled: The Making of The Falcon and The Winter Soldier” (TV-PG) goes behind the scenes of the new series.

Two grown brothers from a dysfunctional family become tangled in a murder investigation in “The Bad Seed” (not rated), a limited series crime drama from New Zealand. All five episodes streaming. (Sundance Now and AMC+)

John Simm stars in the British crime drama “Grace: Season 1” (2021, not rated), based on the Roy Grace novels by Peter James and developed for TV by “Endeavour” creator Russell Lewis.

In the Irish horror film “Boys From County Hell” (2021, not rated), a road crew disturbs the resting place of a legendary Irish vampire believes to have inspired “Dracula.” Mayhem ensues. It debuts both on Shudder and AMC+. Also new to both services:

Lucy the Human Chimp, The Mitchells Vs. The Machines, Things Heard and Seen, Without Remorse