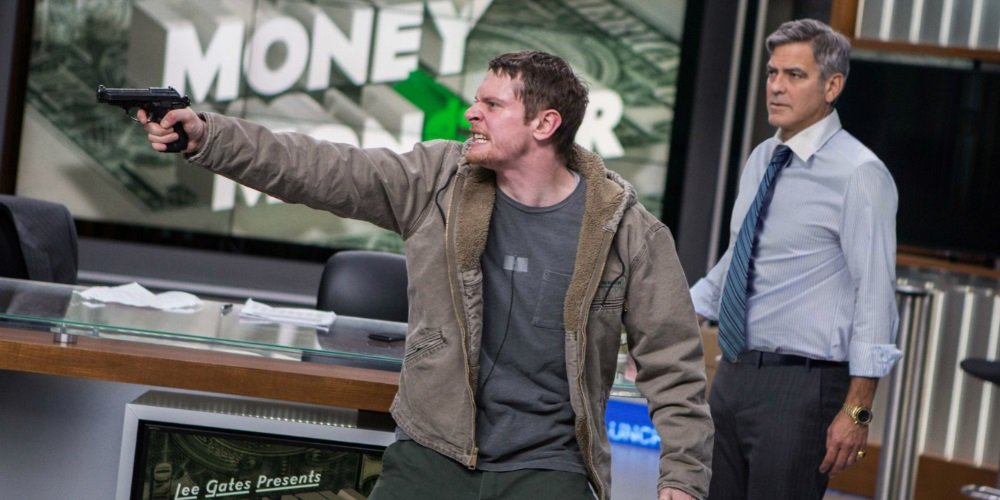 Money Monster (2016) makes a show of channeling anger at Wall Street, which seems to emerge with a profit even when everyone else loses their retirement savings, and the frustration for the failure of the media circus that passes for journalism to hold it accountable into a modern plugged-in thriller.

It has George Clooney playing a glibly charismatic and blithely arrogant Lee Gates, a financial news show host in the Jim Cramer mode only with more show-biz glitz and silly stunts, and Julia Roberts as his long-suffering producer Patty Fenn, the ballast keeping his show steady and moving forward while he improvises on the fly. Jack O’Connell, an intense young Irish actor making his play for American movie stardom, puts on an overworked Noo-Yawk bark as angry young man Kyle, a not-too-bright working class slob who storms the stage with a gun, puts Lee in a bomb vest, and threatens to blow him to the next cable tier if the network cuts the feed. He lost everything when Ibis, a financial investment fund that Lee touted with his usual hyperbolic praise, lost $800 million due to a software glitch, a story that the entire world takes at face value.

It’s directed by Jodie Foster, who treats the whole thing as a technical exercise—how to generate energy in a hostage drama stuck on a single set and broadcast around the world—but never gives it the kind of immediacy or relevance to make it matter. Lee’s rant is offers nothing new—in the wake of The Big Short, it’s not even timely—and the script is a bait-and-switch. Money Monster tries to channel Network and Dog Day Afternoon, attacking the “system” with a sense of righteous outrage and then letting it off the hook as Lee and Patty play detective to find the real crook, the one bad apple whose shenanigans and cover-ups left his company’s investors holding the bag.

What’s left is a glitzy hostage thriller with Clooney playing both hostage and host and Roberts stage managing behind-the-scenes. If they can’t give the theme any weight they sure know how to hold the screen. Money Monster hasn’t anything to say, meaningful or not, about how the financial system works (or, more importantly, fails), but like Lee’s own financial song-and-dance show, it manages to entertain.