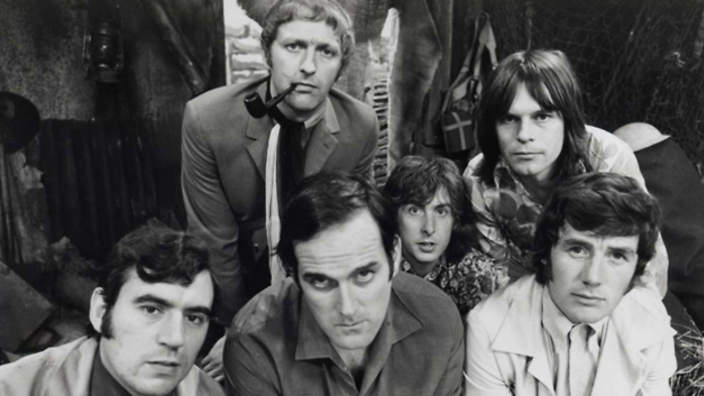 If Monty Python is the comedy world’s equivalent to The Beatles, then the six-part documentary mini-series Monty Python: Almost the Truth (2009) is their Beatles Anthology, an epic of a documentary featuring new interviews with the five surviving Pythons and as many colleagues and friends as the producers could track down.

Each episode focuses on a particular group project—the series, The Holy Grail, Life of Brian, etc.—and the final episode is a touching tribute to Graham Chapman’s death and memorial, marked by (in their own words) “very little reverence and a lot of laughs.” The show loses that focus in the second episode when it takes an interminable detour into contemporary comedians recounting their favorite episodes but then gets right back to the real purpose of the series, which is to explore the creative inspirations and working dynamics of the group.

After all these years, the Pythons have no trouble being completely frank about the strengths and weaknesses of one another and why that balance worked so well (and, in some cases, didn’t work so well). They all pretty much agree that it was the creative conflicts between Cleese and Jones that kept the balance of the TV series (if Jones had a weakness it was that he “cared too much,” according the Cleese, and Gilliam explains that Jones “fights doggedly and he thinks he’s right all the time and he’s not”) and when Cleese left in the fourth season, the balance was thrown off and the show suffered. But the most telling revelation is how little they were involved in one another’s lives outside of the show. They were friends, of course, but not as close as I always believed, or at least imagined.

Making a perfect companion are a pair of hour-long documentaries also streaming on Netflix. Before The Flying Circus (2008, TV-14) charts the formative years of the six men who would become Monty Python and supplements the information in Almost the Truth. Monty Python Conquers America (2008, TV-MA) is exactly what it promises: the story of Python’s rocky road to recognition in the U.S., where they were an underground phenomenon that the mainstream just didn’t understand. (“They couldn’t quite get what we were on about,” is a typical Python understatement about their appearance on The Tonight Show with Joey Bishop.) The story of how the series got picked up by PBS stations (after pitched battles with public boards and conservative viewers) and became a staple of public TV programming in the seventies is fascinating and could be the lost chapter of Almost the Truth.

, iTunes, GooglePlay and/or other services. Availability may vary by service.
Monty Python: Almost The Truth [Blu-ray]

The three-disc DVD and two-disc Blu-ray editions From Eagle Rock features an hour of extended interviews with the five surviving Pythons, 50 minutes of deleted scenes (including a visit to the Spam museum!) and six famous sketches (some of them cut short as they are removed from the larger fabric of the episode).