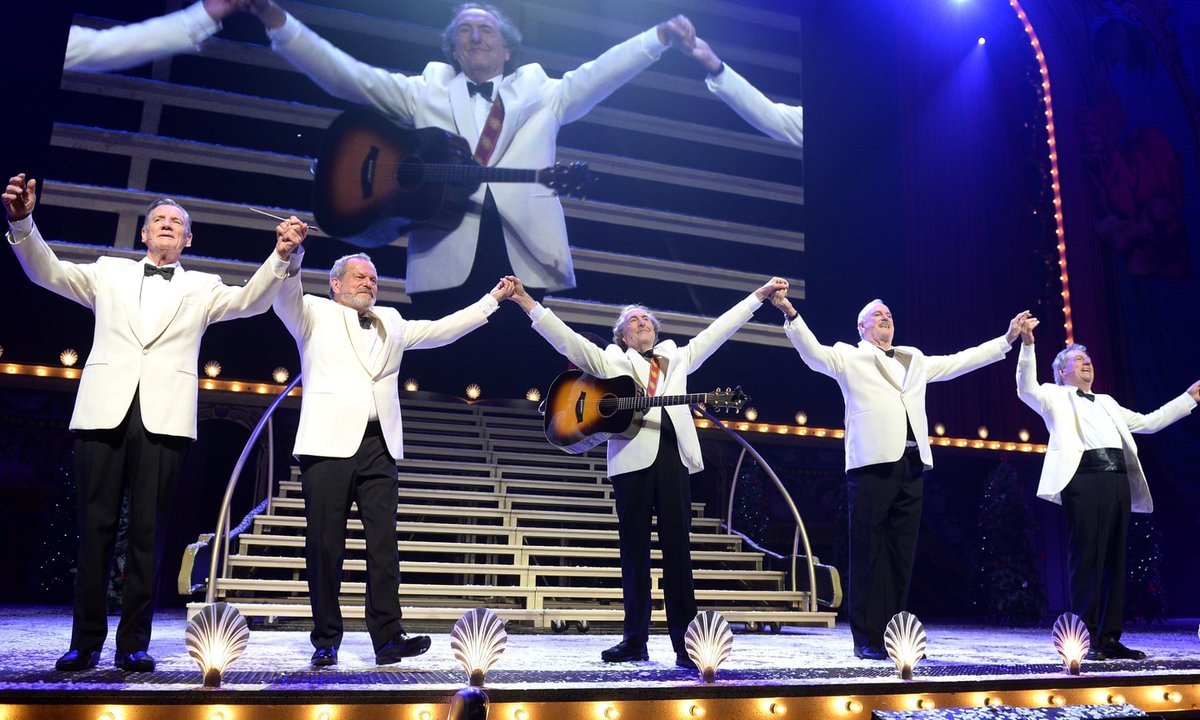 Monty Python Live (Mostly): One Down, Five to Go (2014) – The surviving members of Monty Python’s Flying Circus reunited for their first show as a group in 30 years (when Graham Chapman was still alive) and, they insisted, their last, for a stage performance at the O2 in London. Previously shown via satellite in select theaters around the world for one night only, it was later put on disc and now streams on Netflix.

The title says it all: the five remaining Pythons—John Cleese, Terry Gilliam, Eric Idle, Terry Jones, and Michael Palin, (plus their favorite guest performer, Carol Cleveland)—reunite for an encore, with animator Gilliam getting a little more involved than usual and a featured chorus member periodically joining in. You could say that Chapman is as much as a presence as could be hoped for, considering he died 25 years ago, but in fact he’s featured more than you would think possible, from the title of the show to classic film and video clips that bring him back into the ensemble (including some clips that showed in their first concert film, Monty Python Live at the Hollywood Bowl) or make him a link between live segments, as if he was still interacting with the old gang.

This isn’t a master class, it’s a reunion and we’ve been invited to watch the old gang fall back into old patterns. Between revivals of their greatest hits (with a few wink wink nudge nudge updates) are big song-and-dance production numbers out of an overblown Broadway revue, with young dancers and singers taking over to kick up the energy and provide the production value. The rest is nostalgia. They are nowhere near the top of their game but they are clearly having fun (they are just as funny when they forget their lines or lose their place, which happens a couple of time) and so is the audience. Everyone there seems to know the skits by heart and get a kick out of seeing these senior citizens revive their standards for one last go round.

, iTunes, GooglePlay and/or other services. Availability may vary by service.
Monty Python Live (Mostly): One Down, Five to Go [Blu-ray]

Monty Python Live (Mostly): One Down, Five to Go [DVD]

The Blu-ray and DVD release from Entertainment One feature a few supplements, notably behind-the-scenes clips from the initial reunion meeting, the official announcement, and highlights from the ten shows (including all the guest star appearances), plus the raw footage that the Pythons shot for intermission breaks and other video screen announcements.