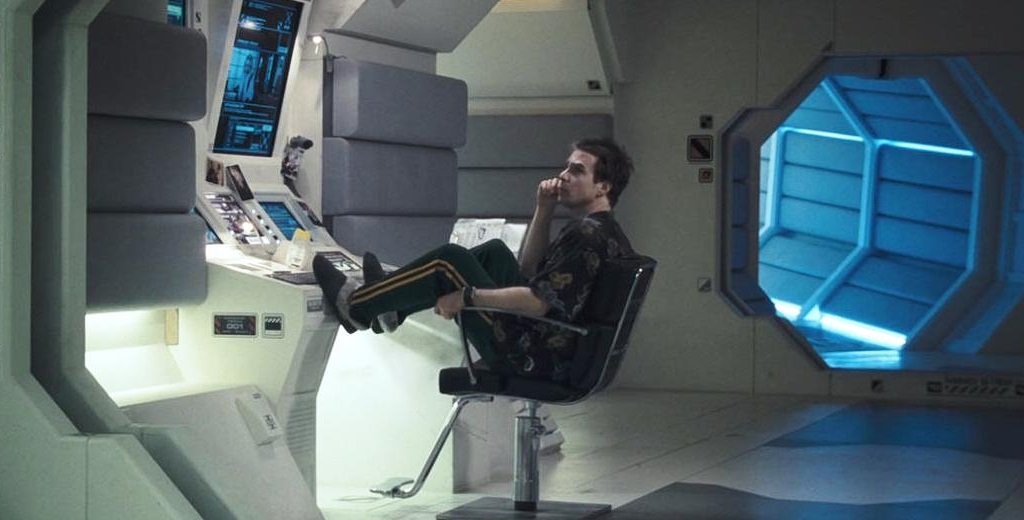 In Moon (2009), Sam Bell (Sam Rockwell) is on the verge of unraveling. He’s the lone operator of a moonbase operation mining the new moon rock wonder fuel that has solved Earth’s energy, with only a computerized robot named Gertie (voiced by Kevin Spacey in a dispassionate HAL-9000 tone with just a hint of human concern) for company and pre-recorded messages keeping a tenuous connection to home He’s counting down the days until his three-year contract ends and he’s getting ragged around the edges. But when he wakes up in the infirmary after a bad crash, he’s suddenly much more focused, alert, healthy. And soon he’s talking to himself, and his other self – physical double, supernatural doppelganger or desperate vision of a man slowly going mad with isolation, we’re not quite sure – is answering.

Essentially a one-man, two character piece, Moon could be an old Twilight Zone episode nurtured into a feature. The industrial environment created by director Duncan Jones references the science fiction future promised in sixties and seventies movies like 2001, but it’s a little banged up here, the gleaming white gone dull and lived in, the open spaces a little claustrophobic, the entertainment limited to old TV shows in constant rerun. It’s telling that the video monitor is accessed not by voice command but by The Clapper.

The plot is pumped up with corporate conspiracy with undertones of identity theft on a metaphysical scale and a race against the clock, but Jones never rushes the pace. It all plays out in the same static, out-of-time quality that has ground Sam into his numb state. When a second Sam appears, the haunting sense of loneliness and dislocation becomes more, not less, pronounced. With a supporting cast consisting of a roaming hydraulic arm and figures on a video screen, Rockwell has to play off himself and does so admirably. He mixes up a believably schizophrenic chemistry that develops into compelling relationship between two men who may be one.

Yes, you eventually find exactly what’s going on, but it’s a mystery best discovered along with the Sams, one in denial and the other embracing the role of a protective big brother seeing himself disintegrate in a surreal reflection. This relationship develops into a fascinating and touching screen friendship.

, iTunes, GooglePlay and/or other services. Availability may vary by service.
Moon [Blu-ray]

The DVD and Blu-ray editions from Sony Pictures Home Video include two commentary tracks featuring director Duncan Jones (one with producer Stuart Fenegan and a lively track with his production crew), two production featurettes that are less slick but far more informative than the usual “making of” pieces, and Q&A sessions with Duncan Jones at Science Center (fielding plenty of conceptual questions) and the Sundance Film Festival premiere.