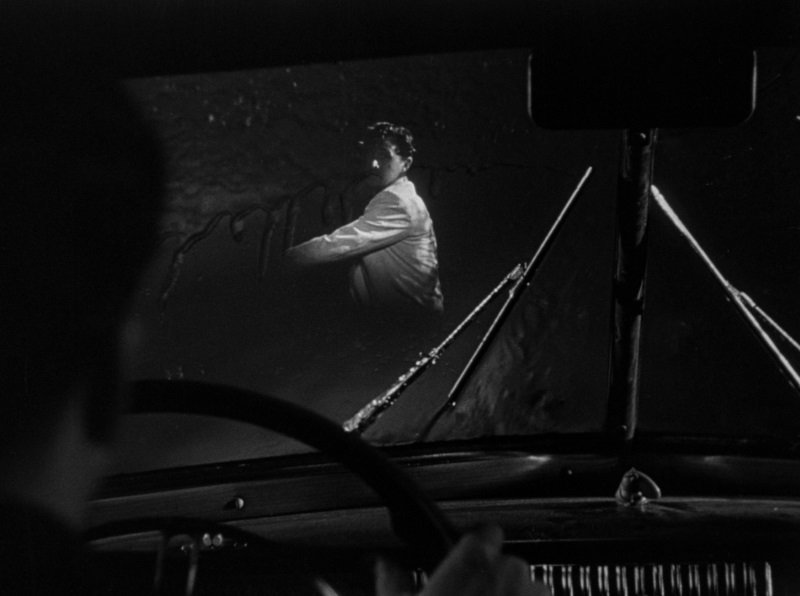 The most authentically romantic filmmaker of classic Hollywood, Frank Borzage made films where the power of love conquered all, not simply narrative obstacles and stubborn complications but time and space itself. He’s the last filmmaker you would expect to produce a film noir masterpiece yet in Moonrise (1948) he delivers beautifully.

Dane Clark is Danny Hawkins, a kid from the backwoods orphaned when his father went to the gallows. The angry kid is bullied into an angry young man by kids who never let him forget his legacy. Pushed into yet another fight, he kills his tormentor in a blind rage and hides the body in a swamp, but the guilt keeps pushing him into lashing out. Gail Russell is Gilly Johnson, a schoolteacher whose career could be in jeopardy thanks to her association with the unstable Danny (not to mention her life when his rage kicks in and he speeds furiously and recklessly down a windy road while his passengers beg him to slow down).

Moonrise has more in common with the poetic realism of 1930s France than with the hardboiled detectives or shadowy tales of corruption and compromise of American crime cinema. The title is perfect: even in daytime there is something nocturnal in Danny’s unreal world. His small southern town is a dreamworld ringed in perpetual mist and haunted by the ghosts and sins of the past and flashbacks are distorted or suggested in shadow, like expressionist echoes of real events. This is a place out of time and space, created entirely on studio sets and photographed with the floating cameras and poetic imagery of a silent movie, lush and claustrophobic and beautifully unreal, like Sunrise as a small town melodrama with a psychologically tormented hero. Borzage invests it with passion and compassion.

Rex Ingram costars as Mose, his hunting buddy and only friend, Allyn Joslyn is the understanding Sheriff Clem Otis, Henry Morgan is the mute, learning-disabled Billy, who adores Danny for standing up for him against the town bullies (notably Lloyd Bridges), and Ethel Barrymore is Danny’s Grandma, who lives deep in the hills and keeps the secrets that torment the boy out a sense of protection.

It was nominated for an Academy Award for sound recording.

Streaming free on Kanopy, which is available through most public and college library systems.

Also on Blu-ray and DVD and on SVOD through Amazon Video, iTunes, GooglePlay, Fandango, Vudu and/or other services. Availability may vary by service.
Moonrise (The Criterion Collection) [Blu-ray]

Criterion gives the film its Blu-ray and DVD debut from a 4k digital transfer of the original 35mm nitrate camera negative and it looks amazing, with great detail, rich texture, excellent contrast, and a sense of depth to the image. The sole supplement in an informative conversation between film critic and historian Peter Cowie and Borzage expert Herve Dumon and there’s a leaflet featuring an essay by Philip Kemp.