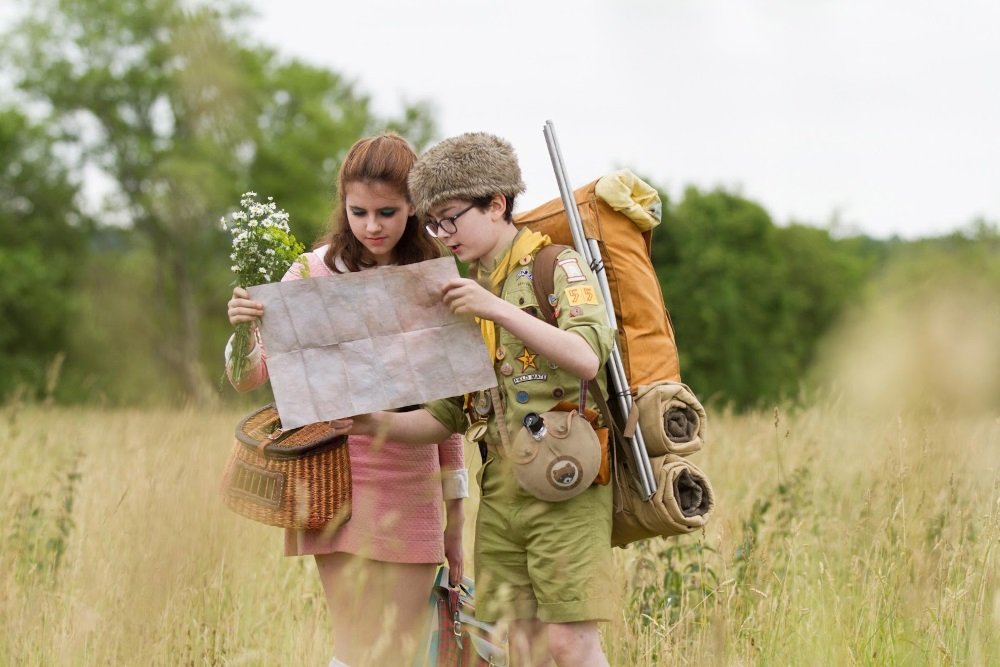 Wes Anderson has made a career exploring the childhood neuroses that keep adult characters in an arrested state of adolescence and stasis. It’s been a lively career with creatively energetic high points like Rushmore and The Royal Tennenbaums but an approach with diminishing returns. Until Fantastic Mr. Fox, a film that refracted his portraits of dysfunctional families and modern anxieties through a storybook world.

In Moonrise Kingdom (2012), Anderson finally builds a film around the troubled kids themselves. Kara Hayward’s Suzy, a book-loving loner with anger issues, and Jared Gilman’s Sam, an eccentric orphan out of step with his fellow Khaki Scouts, are two misfit adolescents who instantly recognize the other as a kindred soul and run away together into the wilds of a small New England island. Which, admittedly, makes escape a little difficult, what with a small army of Khaki scout trackers and a storm on the way.

It’s funny, it’s playful, it’s full of nostalgic blasts and period trappings, but most of all it is loving: accepting of the headstrong kids determined to find their place in the world, forgiving of the oblivious adults around them, affectionate in its storybook imagery and narrative playfulness.

There’s a great cast around the kids—Bill Murray and Frances McDormand as distracted yet protective parents, Edward Norton as a nerdy but sincere scoutmaster, Harvey Keitel as a genially despotic scout commander, Tilda Swinton as the coldly officious Social Services, and especially Bruce Willis as a sad, lonely island lawman who gets a second chance—but the film belongs to the two kids. For all their issues, they are healthier than the adults of Anderson’s previous films, and their commitment inspires these adults to take stock of their failings and make an effort to become better, more honest people.

Like all of Anderson’s previous films, the sixties-set Moonrise Kingdom is filled with the period music and fashion and the offbeat textures he loves so much, but there’s more restraint this time. The delightful details are merely that, grace notes to the culture around our characters. And while Anderson plays with the conventions of young love, runaway adventure, and family comic-drama with a knowing, modern sensibility, he never makes fun of it. The sincerity is genuine, and it makes the film glow.

The original screenplay by Anderson and Roman Coppola earned an Oscar nomination.

It was initially released on Blu-ray and DVD by Universal in simple but handsome editions but Anderson apparently saved up his goodies for the deluxe Criterion edition in 2015. He supervised the 2K digital transfer and is joined on the commentary track by Criterion President Peter Becker and child actor Jake Ryan, and they call up co-writer Roman Coppola and supporting actors Bill Murray, Edward Norton, and Jason Schwartzman to elicit comments from them. “The Making of Moonrise Kingdom” consists of an 18-minute featurette shot on the set of the film plus four storyboard animatics and narrator tests, five minutes of screen tests of the child actors, and a short piece on the miniatures used in the flood sequence. Edward Norton’s home movies from the set (shot on iPhone) run about 20 minutes and are introduced by Norton.

The rest of the supplements are bite-sized pieces: “Welcome to New Penzance” features footage of the locations, “Set Tour with Bill Murray” is a quick 3 minutes, Bob Balaban introduces short segments of actress Kara Hayward (Suzy) reading excerpts from the (fictional) books featured in the film, and “Cousin Ben” features additional footage of Jason Schwartzman as Cousin Ben. The 20-page booklet an essay by critic Geoffrey O’Brien, short pieces by young writers on the film, and art from the film, and there’s a small collection of additional ephemera including a map of New Penzance.