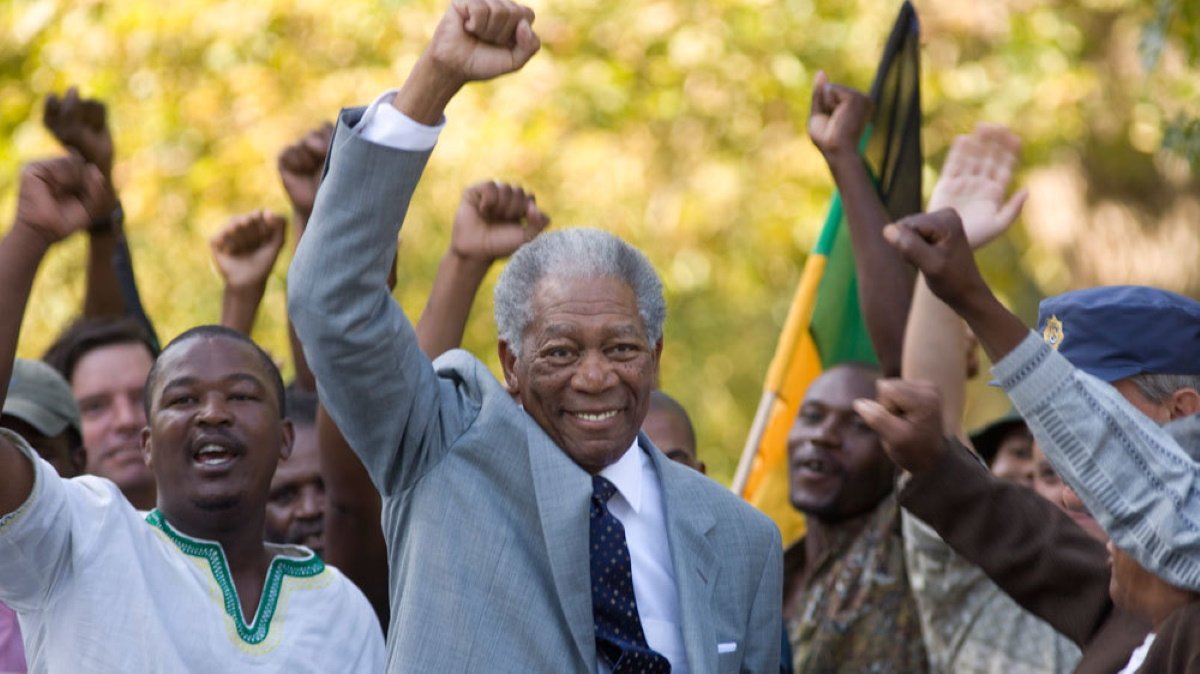 This isn’t a biography of Mandella. Audiences come to the film with the understanding that Nelson Mandella spent 24 years in prison for protesting South Africa’s apartheid regime before taking office, and that he had decades of institutional racism to confront as he integrates an historically segregated country.

Invictus foregrounds Mandella’s efforts to enlist the national rugby team, which many blacks viewed as a symbol of white rule, in his efforts to unite the country around the 1995 World Cup Championship. Even Eastwood can’t make rugby look dignified but Matt Damon brings great conviction (and a convincing Afrikaner accent) to his role as the team captain. He becomes Mandella’s partner in transforming the Springboks (the team mascot) from an Afrikaner symbol into a team that represents the new South Africa.

In some ways, it is as much a film as a memorial: handsome, stately, well-meaning, and dramatically restrained. Freeman developed the project and brought it to Eastwood, who had directed him in Unforgiven and Million Dollar Baby (earning him an Oscar). He received another Oscar nomination as Mandella and his gentle humor and quiet dignity helps soften the reverent tone.

Most importantly, the film is about reconciliation at a moment in history when vengeance could have ruled. There is a deep well of humanism under the story.

Adapted from the book “Playing the Enemy: Nelson Mandela and the Game that Made a Nation” by John Carlin, is also costars Adjoa Andoh as Mandella’s aide, Tony Kgoroge, and Patrick Mofokeng.

Leaves Netflix at the end of June. Add to My List

Also on Blu-ray and DVD and on SVOD through Amazon Video, iTunes, GooglePlay, Fandango, Vudu and/or other services. Availability may vary by service.
Invictus [Blu-ray]
Invictus [DVD]

The Blu-ray and DVD includes a brief featurette on Matt Damon’s rugby training. The rest of the supplements are reserved for the Blu-ray edition. It skips the familiar commentary track for a picture-in-picture track of interviews with cast members, filmmakers and the real-life people portrayed or represented in the film. The mix of commentary and documentary provides a marvelous historical reflection of the reality that inspired the film. Also includes the 20-minute featurette “Mandela Meets Morgan” and an abbreviated version of Richard Schickel’s retrospective documentary “The Eastwood Factor,” plus a bonus DVD and digital copy of the film for portable media players.