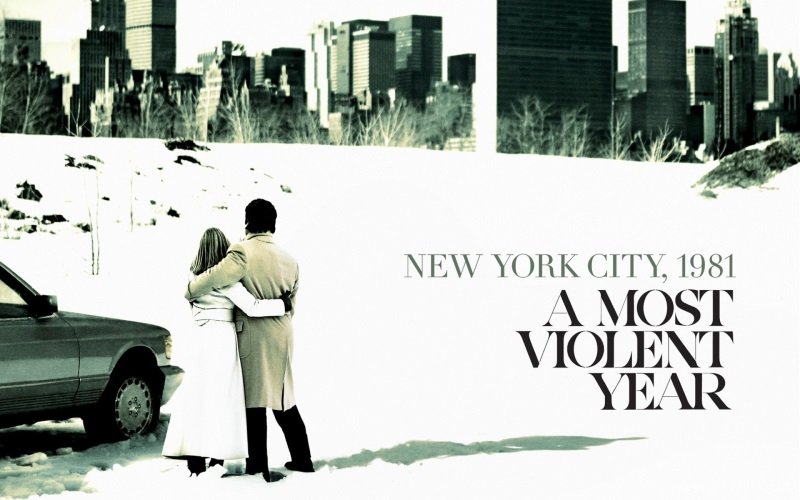 A Most Violent Year (2014) should have been an Oscar contender.

Written and directed by J.C. Chandor (Margin Call) and set in the crime-ridden culture of early 1980s New York City (which was the most violent year on record in the city’s history), it’s a smart, shadowy tribute to the crime dramas of the seventies and early eighties, when the culture of crime and corruption was treated as a systemic issue rather than an outlier problem solved in the final reel.

Oscar Isaac plays an ambitious businessman in the oil heating market determined to succeed without mob ties and Jessica Chastain is his fierce, fearless wife, the daughter of a mobster who is convinced that he needs to mob up when his trucks and his salesmen are targeted and the assistant D.A. (David Oyelowo) is looking into his books (yes, he’s been paying off officials, which is business as usual in that culture). She’s got a bit of Lady Macbeth to her Brooklyn character but Isaac is determined to remain (relatively) honest even when his entire business teeters on collapse as he scrambles to raise money for a deal that will either make him rich or leave him broke. Isaac and Chastain are excellent (though Chastain is left to fill in what the script fails to provide in terms of dimension) and Albert Brooks is almost unrecognizable as Isaac’s pragmatic (and loyal) lawyer

Chandor expertly takes us through gray area between the culture of official corruption and the criminal underworld (organized and unorganized crime both) and favors the human drama over gangster spectacle. It is a violent world, and a shadowy one (the New York winter setting is beautifully shot by Bradford Young, who has a way of suggesting that even daylight is a shadow cast by something wicked), but the violence is all in personal, intimate terms, inflicted on real people who are not equipped for this kind of warfare. His direction is both gritty and graceful, if perhaps a little studied and removed.

Though not exactly glorified, the film portrays this business battlefield as a historical set piece, seen from a distance and elevated to Shakespearean dimensions. There is a cost to every decision, including the choice not to fight criminals on their own terms. Isaac’s performance clarifies that conflict beautifully.

It was nominated for a Golden Globe and three Film Independent Spirit Awards.

Also on Blu-ray and DVD and on VOD through Amazon Video, iTunes, Vudu, Xbox Video, and other outlets.
A Most Violent Year [DVD]

A Most Violent Year [Blu-ray]