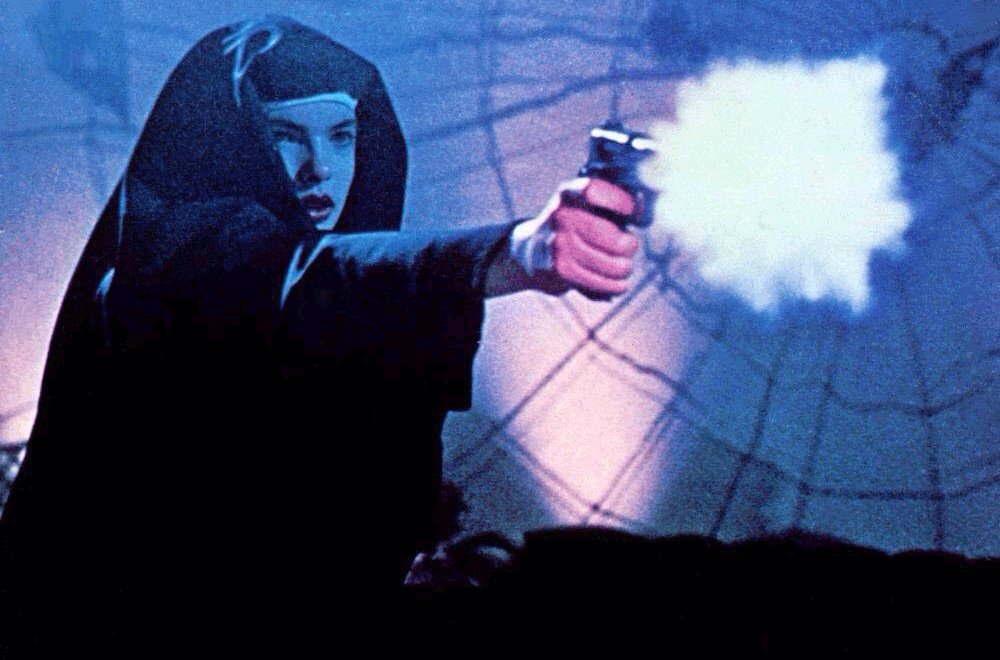 Ms. 45 (1981), Abel Ferarra’s grindhouse breakthrough, is a femme-centered take on the vigilante revenge films of the seventies by way of Repulsion. Set and shot in the garment district of 1980 New York City, the good old bad old Big Apple of Death Wish and Taxi Driver, this is the era when Times Square was a sleazy sideshow and crime was out of control.

Zoë Lund (aka Zoë Tamerlis), who could be Nastassja Kinski’s American cousin, stars as Thana, a mute young seamstress in a dumpy fashion house who is raped twice in a single afternoon. “I just wish they would leave me alone,” she writes to a co-worker, but she lives in a city with a potential predator in every alley, gangbangers in the parks, pimps wailing on their women on the streets, and junkies and the homeless weaving through the sidewalks. Then, enduring yet another oily would-be pick-up artist, her squirrelly demeanor steadies and strengthens, she gives him a hard look, and a vigilante is born. Hard cut from Thana blasting away a sleazy photographer to slathering on bright red lipstick like war paint and trading her modest sweaters for sleek, sophisticated fashions. It’s all the explanation we need. The passive victim becomes vengeful vigilante, hunting for potential predators using herself as bait. And she likes it. A lot.

Bodies fall, blood spurts, and flesh flies from exploding squibs of each gunshot wound. This is an exploitation film but it’s a smart one made with style and passion and for a thriller motivated by the sexual assault of a beautiful young woman, he’s unexpectedly sensitive to her ordeal. There are some wobbly performances and awkward moments and Thana’s instant evolution from timid young woman to coldly assured sophisticate and crack shot is something we just accept as part of the revenge movie convention. Sort of like a superhero origin story without the exposition. But there are also some nice character sketches between the bullets and an undercurrent of black humor as she disposes of her first kill, carved into transportable pieces and dumped in trash cans and alleys around the city.

Ms. 45 is not a feminist revenge film. It is, however, an intelligent and confident piece of exploitation filmmaking marinated in helplessness and anger and heated up to furious vengeance turned psychotic retribution, and one that resists exploiting the woman at the center of it.

It was recently revived and restored by Drafthouse, and that’s the version on Amazon Prime.