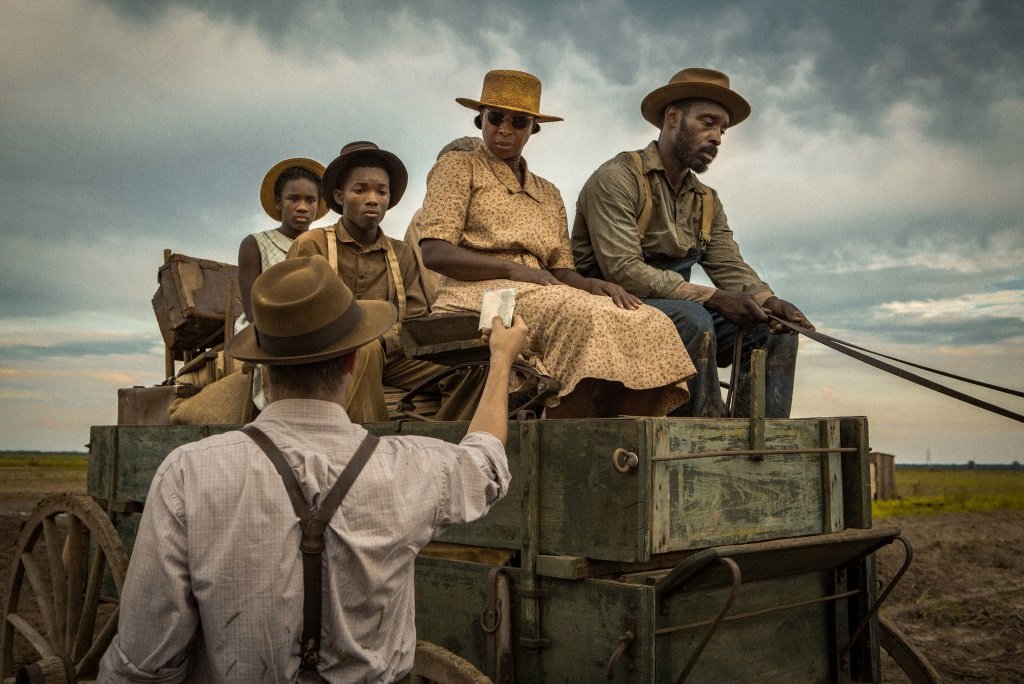 Mudbound (2017, not rated), Dee Rees’s drama of two families—one white, one black—living and farming in the poverty of the Mississippi Delta in the 1940s, takes on knotty issues of race and racism in our recent past in a story of family and sacrifice. Rob Morgan, Mary J. Blige, and Jason Mitchell are the Jacksons, African-American tenant farmers. Jason Clarke, Carey Mulligan, and Garrett Hedlund are the McAllans, the white farmers who own the land worked by the Jacksons.

“It’s a work of historical imagination that lands in the present with disquieting, illuminating force,” writes A.O Scott for The New York Times. ” What stays with you are everyday moments — the wordless communication between Hap and Florence, the aimless soldiers’ talk between Jamie and Ronsel, Laura’s lonely patience, Henry’s simmering insecurity — and the graceful performances that bring them to life. The way those instances of ordinary human tenderness and decency stand out is proof of the film’s achievement…”

The Punisher, starring Jon Bernthal as Frank Castle the gun-toting anti-hero who appeared in Daredevil, is more of a conspiracy thriller than a superhero show. The action series delves into PTSD and military veterans abandoned by their country after returning home, but it’s also a show with a lot of gun violence and brutality.

“The Punisher is at its best when it downshifts and makes space for long conversations between war veterans about combat, post-traumatic stress disorder and loneliness, and bonding scenes with Ben and Frank or Frank and Sarah,” writes Matt Zoller Seitz for Vulture. “When it’s not doing stalk-and-kill stuff that’s staged and shot to evoke the Bourne films and first-person shooter video games, it comes up with violent scenes that play against the usual clichés of contemporary action filmmaking and go for something more atmospheric.” 13 episodes now available on Netflix.

Hulu launches its newest original show, the action comedy Future Man, starring Josh Hutcherson as an underachieving janitor whose video gaming skills win him a spot on a time-traveling team from the future. The premise is mix of The Last Starfighter and The Terminator, and they are duly name checked by our nerd hero, along with Back to the Future and other films. Seth Rogen and Even Goldberg produce and direct the pilot episode and their fingerprints are all over the finished product, from video-game violence to streams of profanity. All 13 episodes of the debut season available.

Watch it on Hulu.

There’s… Johnny!, a comedy about a teenager (Ian Nelson) hired as a gofer on “The Tonight Show” in 1972, was created by Paul Reiser for the streaming service Seeso, which folded before the show launched. The entire 7-episode run makes its debut on Hulu.

Pilot season is back on Amazon. You don’t have to be member to stream and vote on the pilot episodes of three dark comedies that hope to become full series. Glenn Close is retiree with sponging relatives in Sea Oak, created by author George Saunders, Bridget Everett stars in Love You More, which she created with Michael Patrick King (Sex and the City) and Bobcat Goldthwait, and The Climb features web star Diarra Kilpatrick as a telemarketer who aspires to social media celebrity.

Beware of a phishing scam purporting to come from Netflix requesting personal information. These are not from Netflix. If you are ever worried about the legitimacy of an E-mail from a company you do business with, don’t click on the link in the E-mail. Go directly to the company website to make your inquiries. More details here.

One of the most impressive action films of the year, the stunt-filled spy thriller Atomic Blonde (2017, R) stars Charlize Theron as a British agent in 1980s Berlin in the days before the fall of the Berlin wall. Reviewed in Stream On Demand here.

Jeremy Renner is a game tracker who teams with a rookie FBI agent (Elizabeth Olsen) to track a murderer through the snowy Wyoming mountains in Wind River (2017, R), directed by Oscar-nominated screenwriter Taylor Sheridan (Hell or High Water). Reviewed on Stream On Demand here.

Available same day as select theaters nationwide is romantic comedy Almost Friends (2016, not rated) with Freddie Highmore, and mockumentary Cook Off (2017, R), with Melissa McCarthy and Louie Anderson, which was actually finished a decade ago.

The sixth and final season of the southwestern crime show Longmire, starring Robert Taylor as the leathery sheriff of a Wyoming county, is now available. Fans will definitely want to check in after the cliffhanger that ended the last season. 10 episodes on Netflix.

The documentary Jim & Andy: The Great Beyond – Featuring a Very Special, Contractually Obligated Mention of Tony Clifton (2017, not rated) looks back at how Jim Carrey inhabited the role of Andy Kaufman so completely on the set of Man on the Moon.

A Christmas Prince (2017, not rated), starring Rose McIver as an undercover journalist romanced by a playboy prince, is the streaming version of Lifetime holiday movie.

True stories: the non-fiction series Shot in the Dark: Season 1 follows freelance video journalists who rush to crimes scenes for footage to sell to news outlets. A real-life companion piece to the fictional Nightcrawlers (2014, R).

Also new: John Ridley’s Let It Fall: Los Angeles 1982-1992 (2017, not rated) is an epic survey of the culture of Los Angeles in the decade leading up to the beating of Rodney King and Chasing Trane: The John Coltrane Documentary (2016, not rated), about the jazz legend.

Landline (2017, R) reunites Obvious Child director Gillian Robespierre and star Jenny Slate for a comedy of infidelity, guilt, and searching for a missing family member in the era before cell phones.

Gemma Arterton and Bill Nighy star in Their Finest (2016, R) as a team trying to create uplifting films for British audiences during World War II.

True stories: Obey Giant (2017, R) profiles artist Shepard Fairey from punk and skateboarding culture to his creation of the Obama “Hope” poster and Citizen Jane (2017) looks as urban activist Jane Jacobs, who fought to save historic New York City from urban redevelopment in the 1960s.

The LEGO Batman Movie (2017, PG), a spin-off of the animated hit “The LEGO Movie,” is an irreverent, kid-friendly take on the dark knight and A United Kingdom (2017) dramatizes the true story of the Botswana chieftain (David Oyelowo) who married a white British woman (Rosamund Pike), creating political and diplomatic turmoil in the 1950s.

Trues stories: War Dog: A Soldier’s Best Friend (2017, not rated) looks at the K9 units in combat in the American forces overseas.

Arriving Saturday night is the Chinese-U.S. co-production The Great Wall (2017), a mix of historical epic and fantasy starring Matt Damon and Andy Lau, and the fundraising entertainment special Night of Too Many Stars: America Unites for Autism Program hosted by Jon Stewart.