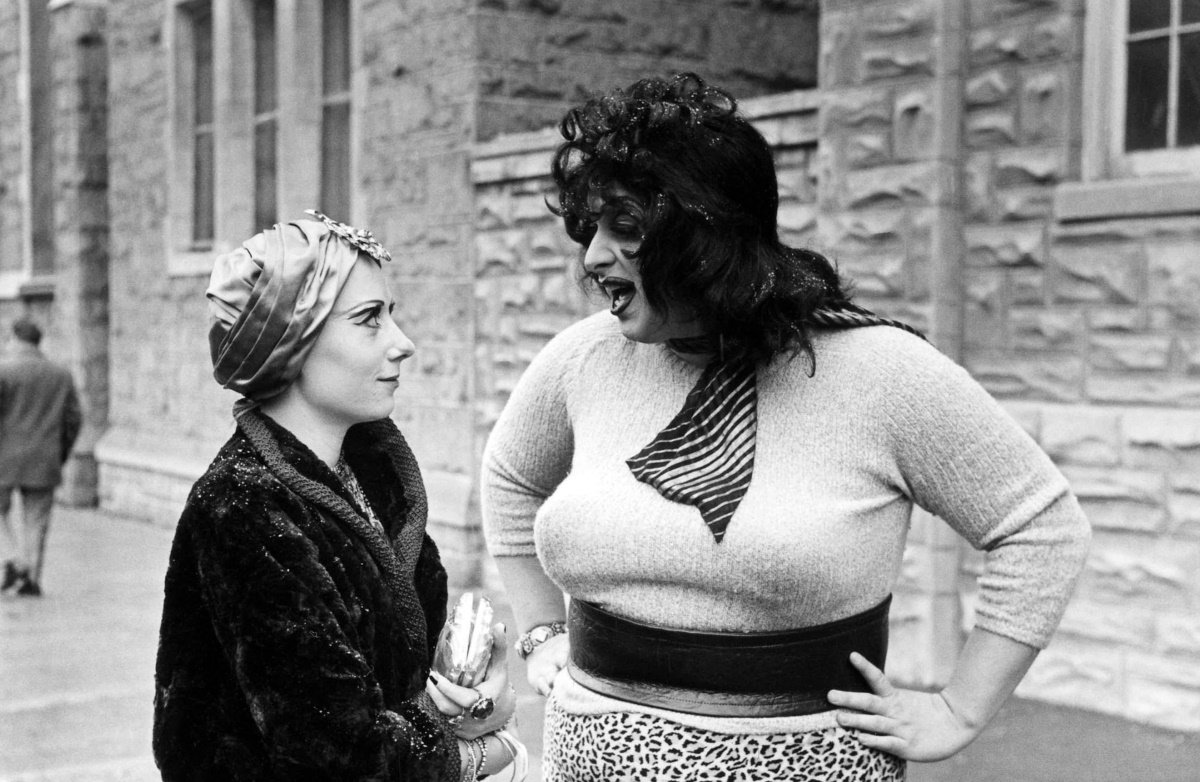 Multiple Maniacs (1970) is quite possibly the trashiest and most tasteless film to get the Criterion treatment. And I say that with love and appreciation.

Shot on B&W 16mm film on a tiny budget by John Waters (who is not just writer and director but cameraman and editor) on the streets of Baltimore with a cast and crew of his friends, this is underground cinema by way of a gleefully outrageous home movie. It proclaims itself “a celluloid atrocity!” and the evidence of the film seems to support the claim.

It opens on a dandy of a carnival barker (David Lochary) in front of a tent pitched in what appears to be a suburban park (it’s actually the lawn of Waters’ parents) hawking “Lady Divine’s Cavalcade of Perversion,” a modern sideshow he describes as “the sleaziest show on Earth.” He could be talking about the film itself. John Waters’s favorite star Divine (the drag incarnation of Glen Milstead) is Lady Divine, a flamboyant crime queen who has blackmailed David into being her lover, advance man, and master of ceremonies for a sideshow designed to rob everyone to she lures in.

It’s the usual story: Divine blackmails David, David plots her murder with his secret girlfriend (Mary Vivian Pearce), Divine comes looking for revenge. Waters regular Mink Stole costars as a homeless dyke who seduces Divine in a church with a rosary while they have visions of the Christ and the Stations of the Cross and Edith Massey is a bartender ready to dish dirt.

Through the course of the ragged production, shot mostly on the streets of Baltimore, Divine is molested in an alley by her own crew, raped by a giant lobster, and goes on a rabid killing spree, literally foaming at the mouth while she chases crowds through the streets in what looks like a twisted parody of the opening scenes of A Hard Day’s Night. It’s not exactly a classic but it is notorious for its aggressively tasteless parade of taboo-breaking scenes and Divine delivers it all at a high pitch of hysteria.

Not rated, features nudity, gruesome violence, cannibalism, drug use, and foul language. In black and white.

It was restored for its disc debut on the Criterion Collection in 4K from the original elements (which Waters had stored in his attic). When folks say things like, “The movie never looked or sounded this good” in a Blu-ray review, it’s often harmless hyperbole. In this case, Waters used digital audio tools to balance the soundtrack, and the digital video clean-up surely makes this look better than the first 16mm struck from this negative. Features commentary by director John Waters, interviews with cast and crew members Pat Moran, Vincent Peranio, Mink Stole, Susan Lowe, and George Figgs, and a video essay by Gary Needham, all produced for this edition, plus a fold-out insert with a new essay by critic Linda Yablonsky.