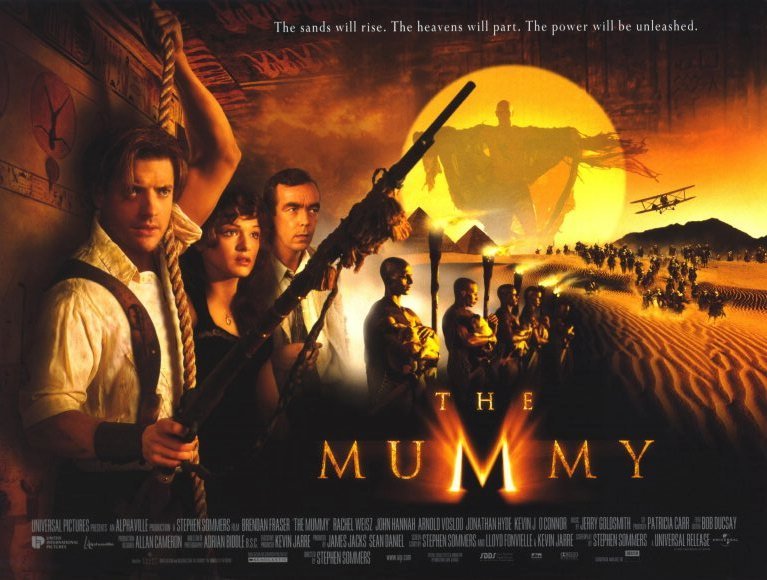 Leave it to Stephen Sommers to create an action-movie out of the sleepiest of monster movie icons. Under his direction, The Mummy (1999) is an adventure film through a yesteryear Egypt right out of the movies but with a modern sensibility.

Brendan Fraser is a bit callow in the lead, a wise-guy soldier of fortune who teams up with a cute librarian (Rachel Weisz) and her reckless gambler brother (John Hannah), and the script is almost too tongue-in-cheek for its own good, but Sommers’ thrill a minute cliffhanger is a tribute, a parody, and a high energy period adventure all in one. He has fun with it all, with plenty of 1930s style, humor, and attitude (including a decidedly dated sense of cultural sensitivity), more Indiana Jones than Gothic horror. The CGI can be distracting (it was a little much even in 1999 and has aged poorly) but the mummy Imhotep (incarnated by Arnold Vosloo when he’s not an elaborate digital effect) is quite the villain as a veritable walking plague.

You just can’t keep the undead under wraps, it seems, and Fraser and Weisz reunite with Sommers for The Mummy Returns (2001), a return match with the evil mummy Imhotep (Vosloo) and an apocalyptic tussle with the ancient warrior demon The Scorpion King (Dwayne Johnson, back when was still billed as The Rock). It’s eight years later and they’ve married, raised a whip-smart little tyke, and continue to plunder Egyptian treasures for their cozy little London mansion, but now they’ve got competition in a gang of grave robbers who plan to resurrect the ultimate warrior for their own nefarious plot of world domination!

John Hannah (the irresponsible brother), Oded Fehr (the worldly Arab warrior), and Patricia Velasquez (Imhotep’s ancient lover) all return for the ride, but the film is stolen from them all by a feral army of chattering, hopped-up pygmy Gremlin-like mummies.

Sommers is a pure pop Stephen Spielberg but this chapter is less Raiders of the Lost Ark than Gunga Din, a pulp update of old Hollywood action movies. His undeniable technical skills are put to the furious action of the ultimate rollercoaster movie ride, but his attitude is blithely Eurocentric colonialist. Hardly sensitive and at times sloppy (The Rock becomes little more than a possessed plastic action figure in his climactic appearance), it’s sometimes more exhausting than exciting—the whirlwind third act rolls from one hyperkinetic cliffhanger to another with almost numbing overkill—but it’s hard to resist the naïve pulp sensibilities and giddy thrills.

and The Mummy Returns

) and other services. Availability may vary by service.
The Mummy [DVD]

The Mummy includes commentary by director Stephen Sommers and editor Bob Ducsay, deleted scenes and outtakes, the documentary “Building a Better Mummy,” which takes an in-depth look at the special effects (the best part is the skeleton fight, with a tip of the hat to Ray Harryhausen), and a sister feature which shows five different scenes through four stages of the effects production with commentary for each example. These two features overlap somewhat in terms of subject matter and footage, but this latter option is a nice use of the medium. The Mummy Returns features commentary by Sommers and executive producer/editor Bob Ducsay, a “Spotlight on Location” documentary featurette, comparison of four special effects scenes through each stage of development (conceptual sketches, animation tests, plate photography, visual effects elements, and finished sequence), outtakes, an exclusive interview with The Rock, and “Egyptology 20.” The Blu-ray releases feature “U-Control” function, a kind of an intermittent audio-visual commentary track where you can access picture-in-picture interview clips and behind-the-scene footage of select scenes.