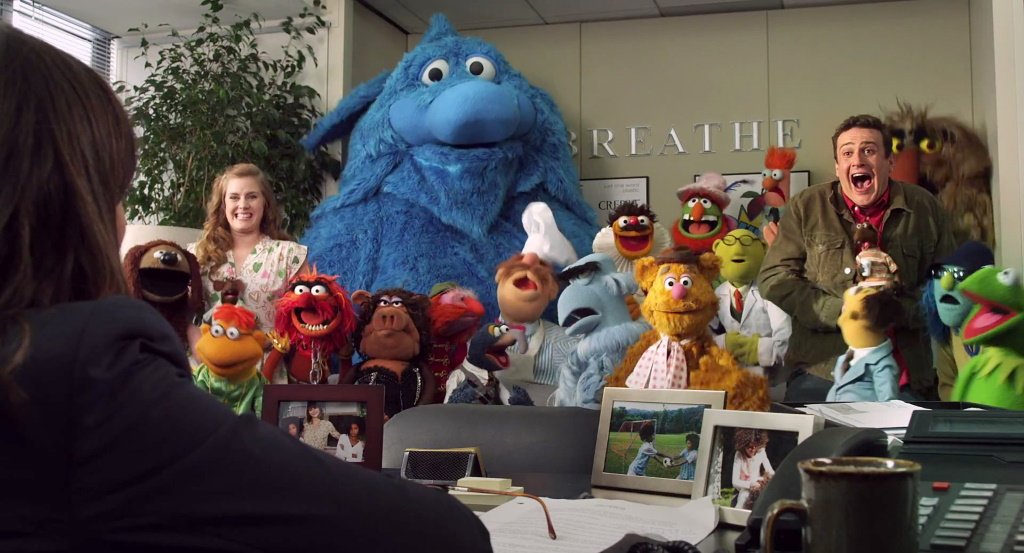 The Muppets (2011) brings the felt comedy stars back to the big screen for a new comedy that asks the eternal questions: What becomes a Muppet in the days of CGI and motion capture animation? Can their brand of innocent whimsy and madcap nonsense hold the attentions of a new generation of fans? And does my love for the floppy-armed characters make me man or Muppet?

Jason Segel, who has proven himself an adept actor and writer in the Judd Apatow mode of buddy movie, took on the project as a labor of love. It’s a classic premise: a “Let’s put on a show” reunion by way of a personal odyssey (as captured in the Oscar-winning song “Muppet or Man?”), with lots of songs, a wicked villain (Chris Cooper, who raps), and a romance between Segel and Amy Adams. Segel and his collaborators (cowriter Nicholas Stoller, director James Bobin, songwriter Bret McKenzie) really recapture the whimsical charm and goofy humor of their best work.

It’s the best showcase for the heart, humor, and wonderful absurdity of the Muppets since the 1970s series and their 1979 big screen debut.

, iTunes, GooglePlay, Fandango, Vudu and/or other services. Availability may vary by service.
The Muppets (Blu-ray+DVD Combo)

The basic DVD features a bonus blooper reel that the disc hedgingly calls: “The Longest Blooper Reel Ever Made (Well… At Least In Muppet History*)” (*We Think). I confess that I never knew the Muppets were such good improvisers and goofy cut-ups. The Blu-ray+DVD Combo Pack features the rest of the supplements, which are almost as much fun as the movie. “Scratching the Surface: A Hasty Examination of the Making of The Muppets” is a very funny, decidedly tongue-in-cheek take on the classic making-of featurette, “A Little Screen Test on the Way to the Read Through” is a comic mini-movie in its own right, and director James Bobin, screenwriter/star Jason Segel, and co-screenwriter Nicholas Stoller provide amiable commentary. Also includes eight deleted/extended scenes, the complete Tex Richman rap number, and all of the theatrical spoof trailers (see the “Hunger Games” parody below, after the jump).

And don’t forget to pause the film. Repeatedly. Why? Because it launches “Disney Intermission,” a whole series of skits, gags, behind-the-scenes bits, and other distractions introduced by the heckling of Statler and Waldorf. A different goody every pause.