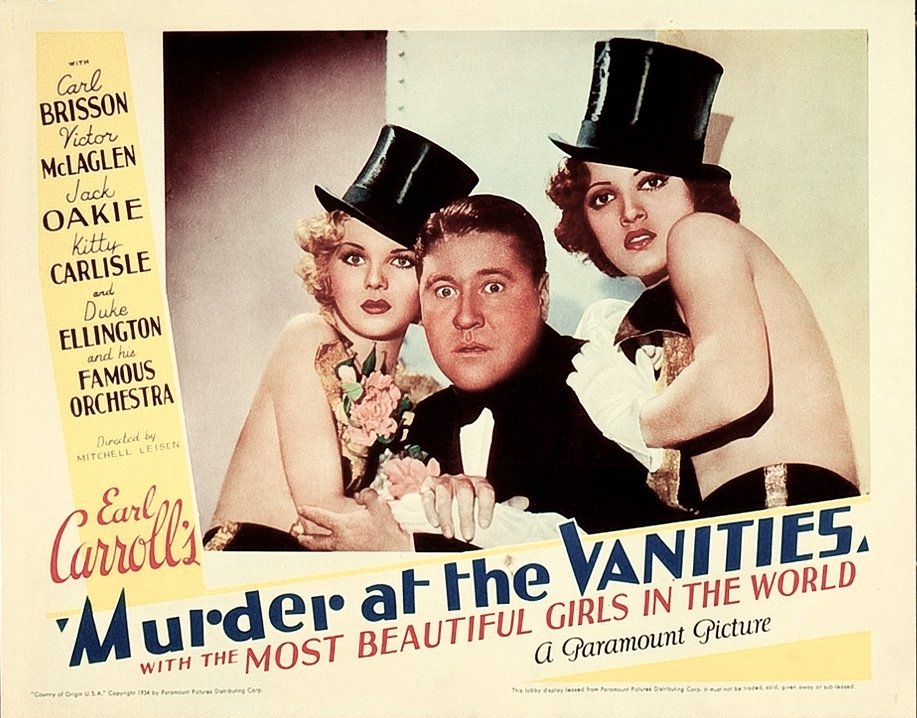 Carl Brisson and Kitty Carlisle (as the singing stars and romantic sweethearts) headline the show onstage but the offstage antics by fast-talking manager Jack Oakie (playing a former newspaperman and all-around wise guy). He outmaneuvers thickheaded Irish cop Victor McLaglen (in his usual hammy lug of a performance) in a race to solve a murder before the curtain drops and handily wins the battle of wits with snappy repartee and smartly delivered quips.

It’s based on a play by Earl Carroll, creator of the “Vanities” stage spectacles, and while he doesn’t appear in the film as such, Carroll’s presence hovers over the entire film through cagey name dropping. In fact, Carroll is the offstage impresario who Oakie is attempting to impress.

Murder at the Vanities has all with the sex and smart-alecky attitude and snappy pace of the best pre-code studio pictures. Leisen mentored under DeMille, serving as his costume designer and art director as the director transformed himself from silky sex comedy director to self-promoting epic filmmaker and king of the spectacle. Leisen’s previous film, the classy drama Death Takes a Holiday, is a handsome but somewhat lugubrious production. With Murder at the Vanities, Leisen comes into his own as a deft director of light romantic comedy and cool, clever Hollywood entertainment, which would become his specialty in the next two decades.

Unlike the mix of fantasy spectacles and Depression-era social commentary in the Busby Berkeley working class backstage musicals for Warner Bros., Leisen revels in the glamour of the sophisticated headliners, cultured folk who sings classy songs to the toast of society that has swarmed in for opening night. The working class mugs here are dull-witted cops (Victor McLaglen) and dizzy chorines (Toby Wing, squeaking and giggling her way through a running gag) and devoted assistants and seamstresses and servants, ready to sacrifice themselves for the beautiful people they serve. Don’t look for some plucky young extra to emerge from the chorus. They’re just there for spectacle, and what a spectacle it is.

To top it off, there’s a musical tribute to the joys of marijuana. In a word, it’s a blast.

Gail Patrick and Donald Meek costar and Duke Ellington appears as himself.

Also on DVD and on SVOD through Amazon Video, iTunes, GooglePlay, Vudu and/or other services. Availability may vary by service.
Pre-Code Hollywood Collection (The Cheat / Merrily We Go to Hell / Hot Saturday / Torch Singer / Murder at the Vanities / Search for Beauty) [DVD]