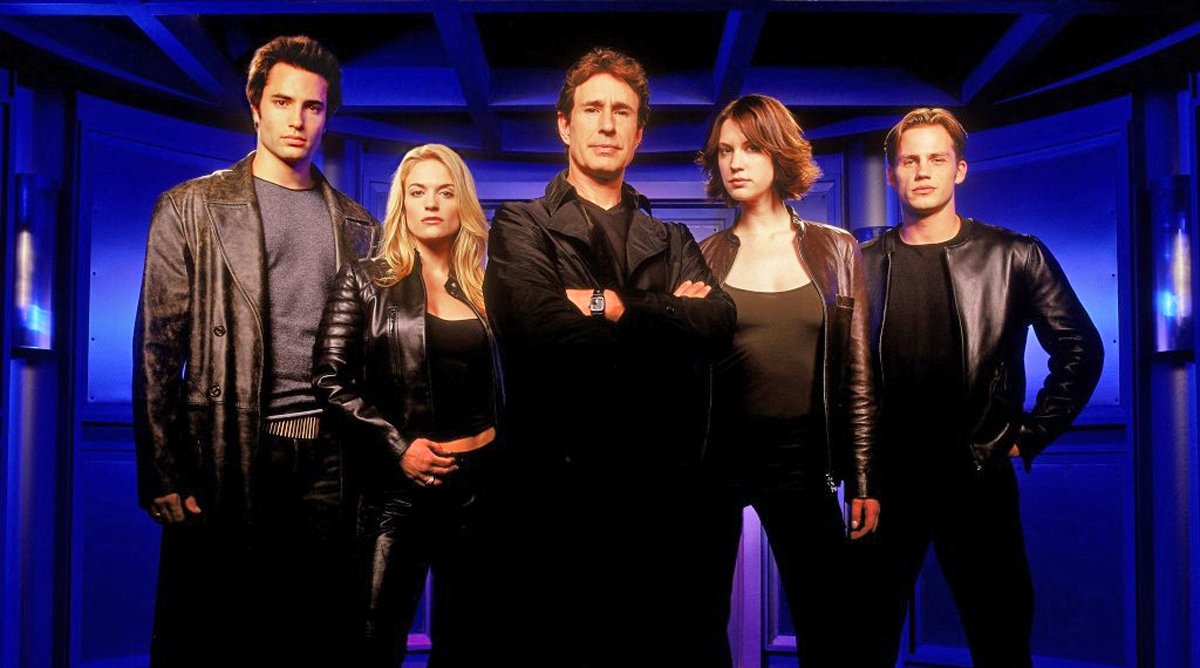 Created by (then) Marvel Comics CEO Avi Arad, the syndicated Mutant X: Seasons 1 and 2 (2001-2003) was an early Marvel live-action series developed as a kind of a hip, low budget X-Men knock-off by way of the comic book spin-off The New Mutants, albeit with more attitude.

The show kicks off in a two-part debut (scripted by comic book legend Howard Chaykin) that establishes the conspiratorial premise of the dastardly genetic experiment to create a race of super soldiers and the rogue scientist Adam (John Shea) who reaches out to the victims and forms the underground super-hero team Mutant X to fight the power and help other mutants escape along a 21st century underground railroad. Adam is both mentor and father figure to the gorgeous young mutant rebels (Forbes March, Victoria Pratt, Lauren Lee Smith, and Victor Webster) in a high-tech clubhouse and Tom McCamus is the unequivocally evil government baddie Mason Eckhart.

Produced in the era before the explosion of superhero movies and TV shows, with their elaborate world-building and cross-overs (not to mention big budget special effects), this proto-Marvel series was produced after the first X-Men movie made both mutants and the “x” suddenly hip (Fox, in fact, sued over similarities to X-Men) and in many ways looks forward to The Gifted. The scope and budget, however, is much smaller, with action leaning on Hong Kong-style wire-work stunts and digital effects. Most of the episodes are the usual “freak of the week” battle as the team comes up against Eckhart’s latest operative or a new lone-wolf mutant, but the series matures somewhat as it progresses.

The show belongs to the sexy young players in the battle of beautiful good guys versus the nasty, ugly evil of covert operations so underground that the government doesn’t (or won’t) recognize it, especially the team’s “feral” fighting jungle cat Shalimar Fox (Victoria Pratt). Part protective den mother, part loner hunter, she gets a look on her face when she unleashes her inner animal and leaps into battle that communicates not simply an understanding, but a joy in her nature, her power, and her potential. It doesn’t hurt that she’s a stone fox but compared to her, the rest of the Mutant X team are just pretty faces.

The show ran for three seasons but the first two are the best. The kids get a sudden power boost at the end of Season 1 and spend much of the second season learning to master them. Season 2 is an improvement in other ways as well. Old nemesis Mason Eckhart is out of commission and a new, more powerful enemy arises: Gabriel Ashlocke (Michael Easton), a dying mutant building an underground army who will do anything to cure his disease. The team gets a greater variety of adventures in addition to the usual rogue mutants, and more time to explore their own powers and relationships. Even the loner feral Pratt begins to bond with psychic Smith.

The show won the 2003 Saturn Award for Best Syndicated/Cable TV series but it looks kind of cheesy and awfully primitive next to the high bar set by the current shows on network, cable, and streaming services. Fans of superhero TV, however, may just get a kick out of this proto-Marvel series.

The DVDs, released by ADV in the 2000s, are long out of print. They include features, interviews, profiles, and other supplements. Also available in Canadian and foreign import editions.