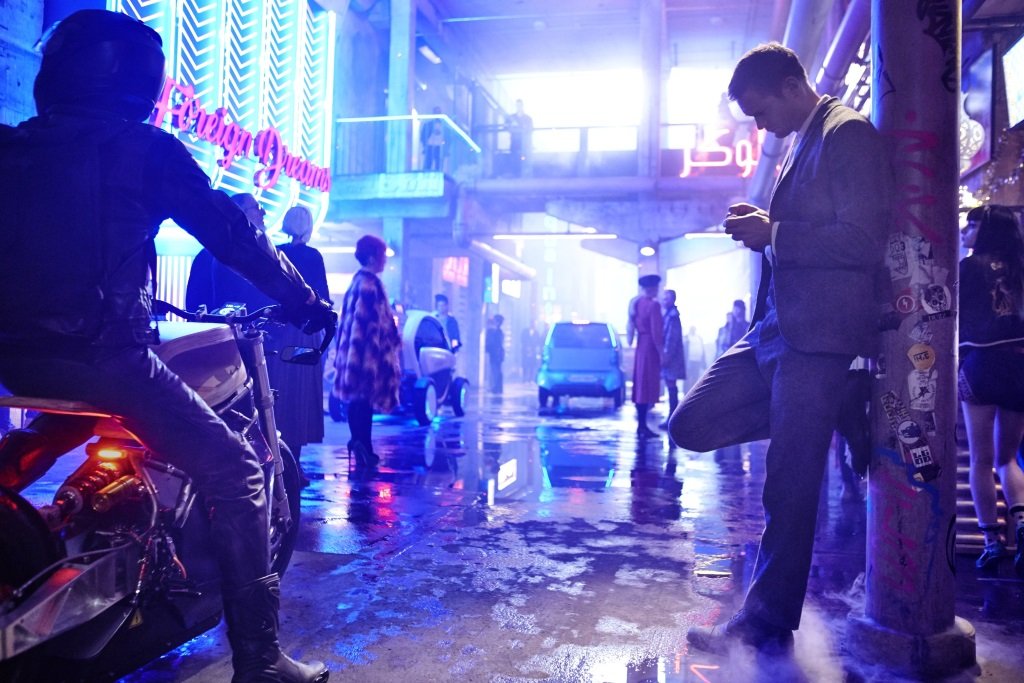 Director Duncan Jones (of Moon and Warcraft) describes Mute (2018, not rated), which stars Alexander Skarsgård as a mute bartender searching for a missing woman in the underworld of a Blade Runner-esque Berlin in 2052, as his science fiction Casablanca.

Reviews have been, shall we say, mixed, but everyone agrees that it looks great. “Mute is ludicrous, but within the confines of its referential logic, also pretty cool,” writes Eric Kohn for IndieWire. “It’s a mad gamble that works better than it should, and though it never quite finds its natural rhythm, stands out as one of the strangest Netflix original productions to date — a messy, off-the-wall conceit made with a sizable budget — and it could only have found support from a studio capable of luring audiences on the basis of the movie’s resemblance to other material.” Paul Rudd , Justin Theroux, and Sam Rockwell co-star.

It debuts direct to Netflix.

The Netflix original crime drama Seven Seconds takes on a timely subject with the fictional story of the death of an African American teenager and a cover-up by white cops.

“Seven Seconds, the new Netflix drama about crooked cops covering up a hit-and-run accident and investigators trying to punish them, is another TV series about how a murder affects a community,” writes Vulture TV critic Matt Zoller Seitz. “It’s not the best or the worst of the lot, but at its most intelligent and heartfelt, it generates empathy for its characters, sadness at the culture that shaped them, and anger at the institutions that protect the worst among them.”

Also on Netflix is the Oscar-nominated animated feature The Breadwinner (2017, PG-13), produced by Angelina Jolie.

Andrew Garfield is Robin Cavendish, he real-life activist who fought to live a full life after being paralyzed by polio, in Breathe (2017, PG-13), the directorial debut of actor and motion capture master Andy Serkis. It’s new on Amazon Prime

Detroit (2017, R), based on the real-life murders committed by police during the 1967 Detroit riots, is a powerful drama from Oscar-winning filmmaker Kathryn Bigelow that was missed by most audiences. It’s now streaming on Hulu.

Black Panther is officially a comic book movie phenomenon. Now revisit the earlier films of director Ryan Coogler. His Sundance award-winning debut feature Fruitvale Station (2013, R), a moving drama based on the unprovoked killing of an unarmed young black man by transit officers in Oakland, is streaming on Netflix (reviewed on Stream On Demand here) and his follow-up Creed (2015, PG-13), the next generation Rocky sequel with Sylvester Stallone as Rocky Balboa training the son of Apollo Creed, is on Amazon Prime and Hulu (reviewed on Stream On Demand here). Both star Michael B. Jordan.

Will Ferrell and Mark Wahlberg deal with more daddy issues in the comedy Daddy’s Home 2 (2017, PG-13) with John Lithgow and Mel Gibson. Also on DVD and at Redbox.

Also new: drama Same Kind of Different as Me (2017, PG-13) with Greg Kinnear and Renee Zellweger, animated nativity story The Star (2017, PG), and documentary “Black Code” (2017, not rated), about the more sinister aspects of the Internet.

Available same day as select theaters nationwide is action thriller Beast of Burden (2018, R) with Daniel Radcliffe as a drug smuggling pilot caught between the cartel and the DEA. Also new:

Daniel Day-Lewis won his third Academy Award for playing Lincoln (2012, PG-13) in Steven Spielberg’s compelling drama about the politics of abolition in the final days of the Civil War.

FullMetal Alchemist (Japan, 2017, not rated, English and Japanese versions with subtitles) is a live-action feature based on the popular comic book and animated series.

Three crime thrillers arrive from South Korea: a reformed serial killer goes after a new killer in Memoir of a Murderer (2017), a young man suspects that his brother is not really his brother in Forgotten (2017), and a shady cop gets caught between Internal Affairs and his corrupt bosses in Asura: The City of Madness (2016). All three not rated, with subtitles.

Stand-up: Chris Rock: Tamborine (2018), the comedians first special in a decade, and Agustín Aristarán: Soy Rada (2018, with subtitles) from Argentina.

Gugu Mbatha-Raw is a self-destructive R&B diva struggling to find her own voice in Beyond the Lights (2014, PG-13), a nicely nuanced drama from filmmaker Gina Prince-Bythewood.

Fans of the big blue bug of justice rejoice: the tongue-in-cheek superhero series The Tick: Season 1B is now streaming!

Also new: the western The Ballad of Lefty Brown (2017, R) with Bill Pullman and Peter Fonda;

A South Korean twist on La Femme Nikita, The Villainess (South Korea 2017, not rated, with subtitles) is a high energy thriller with astounding action scenes and plenty of melodrama. Reviewed on Stream On Demand here.

White Bird in a Blizzard (2014, R) stars Shailene Woodley as the teenage girl coping with the sudden disappearance of her enigmatic mother (Eva Green).

Streaming TV: the mini-series The Long Road Home is an Iraq war drama about an American platoon ambushed during a patrol through Sadr City.

Will Ferrell and Amy Poehler turn their home into a secret suburban casino in the comedy The House (2017, R).

Last Week Tonight with John Oliver is back with new episodes on HBO each Sunday night and streaming the next day.

Arriving Saturday night is Notes from the Field (2018, not rated), the one-woman stage show written and performed by Anna Deavere Smith and recorded exclusively for HBO.

FilmStruck’s Director of the Week is Peter Greenaway, who mixed avant-garde approaches into such movies as The Draughtsman’s Contract (1982, R), the notorious The Cook, the Thief, his Wife, and her Lover (1989, not rated), and Prospero’s Books (1991, R), his take on Shakespeare’s “The Tempest.”

Get a Bit of Buddha with these three films with Buddhist themes: Kon Ichikawa’s lyrical World War II drama The Burmese Harp (Japan, 1956, with subtitles), Bae Yong-kyun’s meditative Why Has Bodhi-Dharma Left for the East? (South Korea, 1989, with subtitles), and the gentle road movie Travelers and Magicians (Bhutan, 2003, with subtitles).

New to the Criterion Channel is A Slave of Love (USSR, 1977, not rated, with subtitles) is a satirical portrait of moviemaking and revolutionary activity during the Russian Revolution from Russian director Nikita Mikhalkov. Also new: