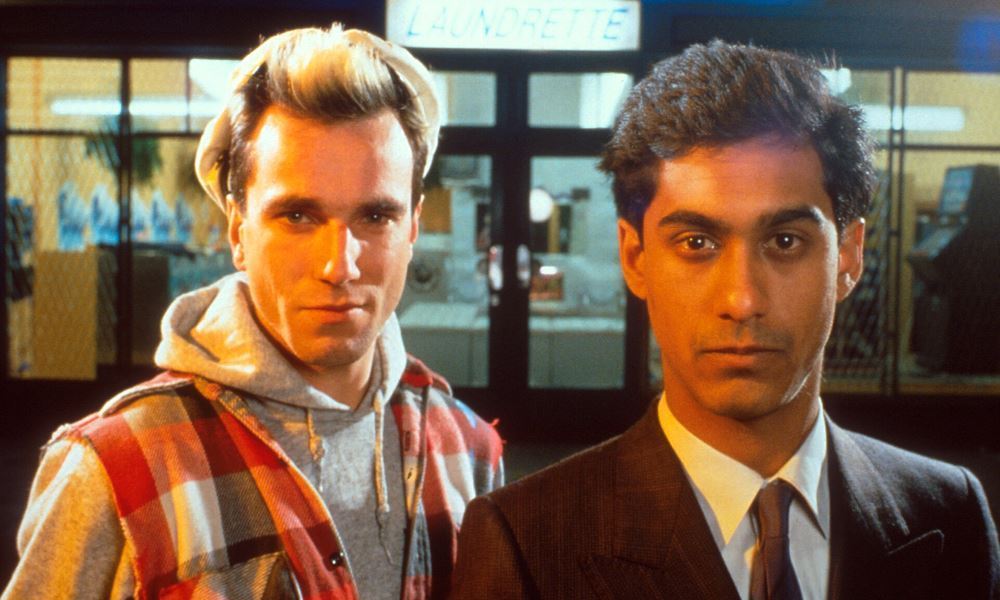 Provocative and potent, My Beautiful Laundrette (1986) launched a lot of careers while shaking up British cinema in the eighties.

Gordon Warnecke stars as Omar, the son of a Pakistani immigrant in London who takes over the management of a failing launderette in a seedy neighborhood owned by his entrepreneurial uncle (Saeed Jaffrey). Omar is an outsider in both cultures. Born and raised in Britain, he’s still seen as an immigrant by his white neighbors, and he’s gay, which he keeps secret from his family.

Daniel Day-Lewis plays a rough and tumble, street-smart, gay punk who turns his back on his racist buddies and resumes a relationship with his old school-chum and boyfriend Omar, a romance they keep secret from their friends and families.

It’s a grungy yet dynamic portrait of race and prejudice in the Thatcher-era London of East Indian immigrants and neo-Nazi gangs. It offers a complex portrait of the social and economic culture of Thatcher’s England and a frank (and for its day explicit) portrayal of a gay romance on the screen, but it’s also a very human story of individuals struggling to find their identity and their place in a complicated culture.

It was the breakthrough feature for director Stephen Frears, who had made his feature debut nearly 15 years before with Gumshoe and spent more than a decade directing television plays for British TV. It was the debut screenplay of playwright Hanif Kureishi, who went on to a brilliant screenwriting career. And it featured the breakthrough performance of an unknown but searing young actor named Daniel Day-Lewis, who underplays next to the portraits in ambition and power offered by Jaffrey and Warnecke, letting his scruffy character and rough honesty quietly radiate from his simmering presence.

The screenplay earned an Oscar nomination and Day-Lewis earned awards from the National Society of Film Critics and the New York Film Critics Circle for his performance.

, iTunes, GooglePlay, Vudu, and/or other services. Availability may vary by service.
My Beautiful Laundrette (The Criterion Collection) [Blu-ray]