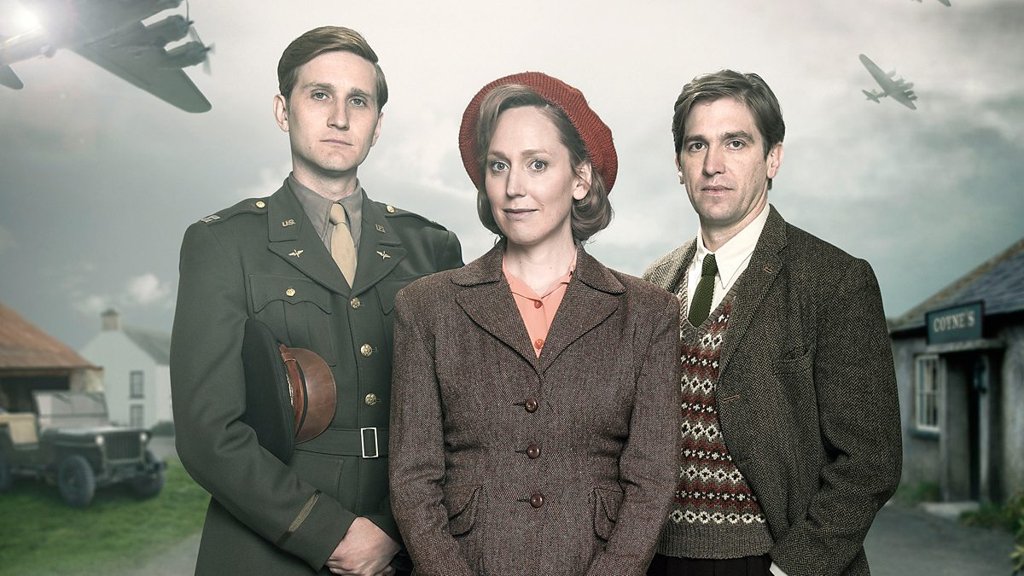 Set in a rural Irish town during World War II, My Mother & Other Strangers (2017) is another British TV homefront drama, this one viewed through the memories of an adolescent boy.

Francis Coyne (Michael Nevin) is the son of Rose (Hattie Morahan), who is London born and bred and treated like an outsider by the locals for her education and manner of speaking, and Michael (Owen McDonnell), who runs the local tavern that his father ran before him, and younger brother to teenager Emma (Eileen O’Higgins), who is just getting interested in boys. Tensions are high thanks to an American Air Force base located nearby and the locals are hostile to the American boys who come to the tavern and date the local girls. Rose, meanwhile, becomes attracted to the American liaison officer (Aaron Staton of Mad Men).

This presents the homefront experience from a town where locals treat the war as an imposition on their everyday life—there are no raids in this corner of Great Britain and the war is little more than headlines or radio news reports to most of them—and is informed by the experiences of creator Barry Devlin. The stories involve the black market, clashes between clannish local practices and national law, and collisions between the local Irish and the American troops, all young men waiting to be sent into battle, but otherwise this isn’t too different from another current BBC series, Home Fires. It’s just a little more provincial and roughneck, and tinged with nostalgia thanks to the wistful narration (courtesy of Ciarán Hinds) that opens and closes each episode.

It ran a single series of five episodes and originally showed in the U.S. on the PBS showcase Masterpiece.

, iTunes, GooglePlay and/or other services. Availability may vary by service.
My Mother and Other Strangers [DVD]

The DVD from PBS presents 5 episodes on 2 discs plus a featurette.