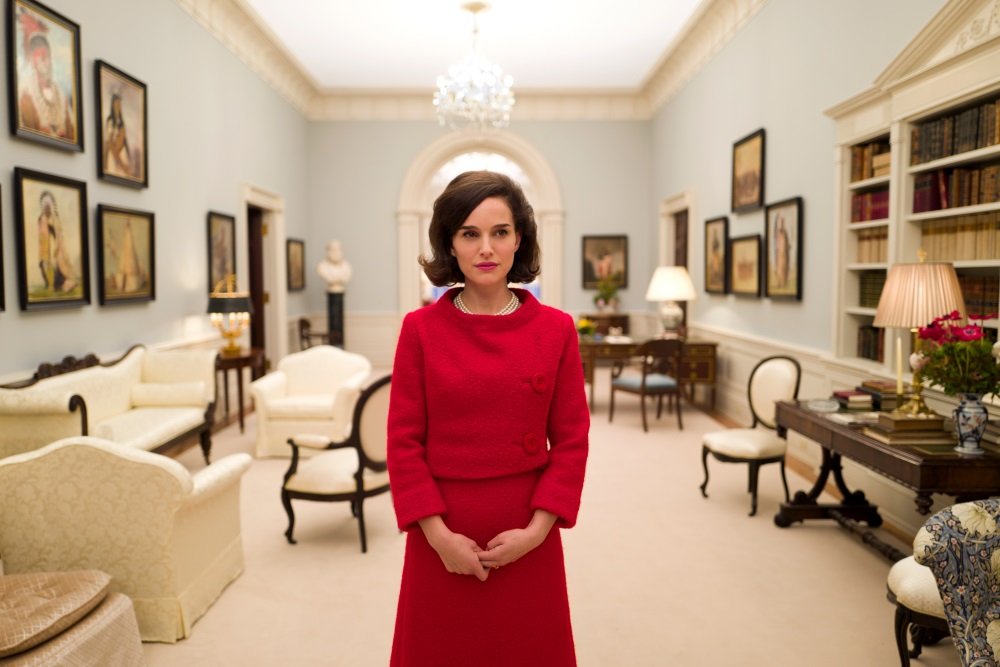 Jackie (2016) – Natalie Portman earned an Oscar nomination playing American First Lady Jacqueline Kennedy in the week following the assassination of President John F. Kennedy. This is not the conspiracy drama of Oliver Stone’s JFK, nor is it a sentimental spectacle of a country mourning the death of an inspirational President. This is an intimate portrait of an enigmatic woman facing not only the death of her husband and the upending of her entire world, but fighting the newly sworn in President Lyndon Johnson (John Carroll Lynch) and what seems to be the entire White House staff to honor Kennedy’s memory with the courage that all the new President’s the men resist.

Slipping back and forth in time, like the impressions of memory fragmented by grief and shock and trauma, the film is framed by an interview with Jackie, essentially exiled to her Hyannis Port home, by an unnamed reporter (Billy Crudup) who arrives a week after JFK’s death. This Jackie, however, is not the soft, smiling, cultured beauty in elegant attire giving way to the men in the room. The flashbacks give the breathy delivery and poised stillness that captures the public Jackie seen in the famous White House TV tour (recreated with startling accuracy in the film) while revealing it all to be a performance, part of the persona she created to play The First Lady in public. As they continue, Portman’s performance shows the tension between the public and private person and the frustration of a smart woman sidelined by the men running the show.

Chilean filmmaker Pablo Larraín made his name exploring his own country’s history since World War II, in particular the poisonous culture of Chile’s dictatorship and the reverberations of the authoritarian culture during and after those dark days. For Jackie, directed from a screenplay by Noah Oppenheim, he explores the strength of the First Lady to lead the country in mourning by insisting on a public show of respect—no hiding from the threat of further violence—while privately dealing with her own grief. But he also frames it within the shock to the spirit of idealism, a potential blow to the country’s spirit that Jacqueline Kennedy faces with steely defiance and elegant poise. Larraín’s style matches his subject: images handsome but austere with Jackie as a character playing a part in the impersonal landscape of White House rooms that are never really home.

It’s almost too impersonal, watching everything at a remove in an atmosphere almost brittle in its fragile tension, until she’s finally off camera (she drops her armor with her aide, played by Greta Gerwig, and with brother-in-law Bobby, played by Peter Sarsgaard), or she refuses to be silenced by the staff that has sidelined her for so long. Portman embraces the complexity of inhabiting both the public persona and the private person, trying to be a mother to her children and First Lady to a country in mourning while reeling from shock and loss. The emotions are muted, suggested in gestures and details, as is the drama. Jackie doesn’t deliver the catharsis you might expect from the subject matter. It’s more interested in the nuances of character in the woman who, during the most emotionally devastating time of her life, stands up to the men who presume to tell her how it’s going to be. This time, in her final days embodying the symbol of JFK’s White House, she’s telling them.

Watch it on HBO Now and HBO Go

, iTunes, GooglePlay, and other services. Availability may vary by service.
Jackie [Blu-ray]

The Blu-ray and DVD includes the featurette “From Jackie to Camelot” and a still gallery. The Blu-ray also features bonus DVD and Ultraviolent Digital HD copies of the film.