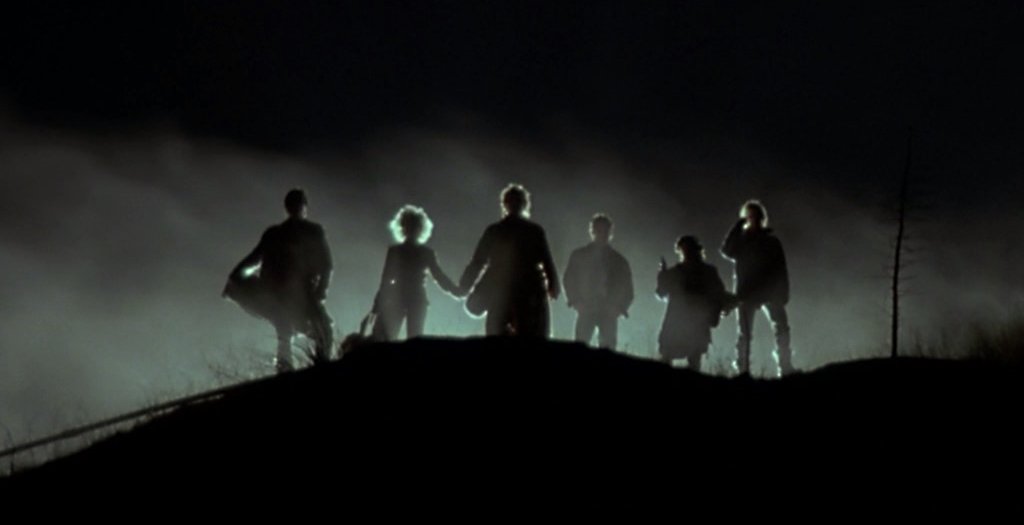 They hunt by night, picking off stray hitchhikers, wandering loners and anyone else unlucky enough to stray into their path. They keep to back roads and lonely towns of the American southwest. They are a feral clan, more a pack than a gang. They are family. And they feed off the blood of humans.

To call Kathryn Bigelow’s Near Dark (1987) a vampire western is to miss the poetry and the power of her uniquely American reworking of the classically European horror genre. The word “vampire” is never uttered in the film. There is no lore of crosses and garlic and holy water, only the searing threat of the sun, which burns through them like acid. They only know that they are eternal, they are nearly invulnerable, and they hunger.

Adrian Pasdar is the blue-eyed young cowboy Caleb, a dreamer yearning for something beyond his family farm. Jenny Wright is the mysterious Mae, the doe-eyed beauty with the faraway look and the honey voice whose little girl lost charms lure him into her arms. She bites, but not to feed. She turns this beautiful boy into a night-dweller like her, to become her companion and lover, to join the pack that is her family: Lance Henriksen’s scarred Civil War-survivor of a stern dad, Jenette Goldstein’s soiled peroxide blonde with maternal instincts, Bill Paxton’s wild man big brother, and Joshua Miller’s eternal little brother trapped in the body of a child.

Near Dark is both ferocious and lyrical, a moody horror film with the frontier community romanticism of a John Ford western and the violent ferocity of a Sam Peckinpah film. The night scenes have a stiletto crispness to it, as if seen through the heightened senses of the nocturnal hunters, and the days have a foggy haze of innocence lost. The horror is laced with dark humor (“I hate it when they ain’t been shaved,” drawls Paxton after gorging on a particularly scruffy redneck) and the pulsing attraction between Caleb and Mae, but Bigelow never shies away from the animal savagery of their predatory nature.

Near Dark is about family and blood in the most primal sense: the blood that feeds, the blood that binds, and in this new chapter of vampire lore, the blood that heals. Bigelow infuses the European myth with fresh blood from a uniquely American vein.

The Anchor Bay special edition features commentary by filmmaker Kathryn Bigelow, the excellent original 47-minute documentary “Living In Darkness” (highlights include the cast members Henriksen, Goldstein, and Paxton describing the back stories they created for their vampire characters and stories from the “vampire boot camp” where survival exercises were worked into the film), a rare deleted scene with commentary by Kathryn Bigelow, galleries of storyboards, production stills, and posters and advertising stills, DVD-ROM accessible script, and trailers.