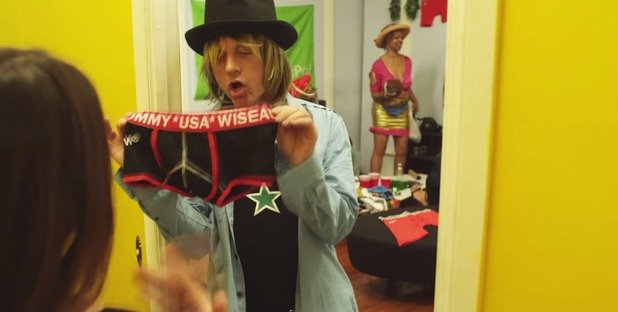 Are you a fan of Tommy Wiseau’s inimitable The Room, a movie that spawned a cult following on the midnight movie circuit because they couldn’t believe that anyone could produce a film this bad and kept watching to remind themselves that yes, it does? Then you just might want to see the sitcom that he produced sometime in the last decade in the hopes of selling it to… somebody. The pilot of The Neighbors, which Wiseasu wrote, directed and starred in (playing two roles, the manager of the apartment house and a resident who may be a drug dealer, I’m not quite sure) screened to sold-out audiences in Manhattan last year.

Well, it looks like he sold it. Hulu has picked it up as an exclusive and they just released the first four episode of the show, a shrill, awkward, practically unintelligible production that makes The Room look like Citizen Kane. The show will ultimately run 12 episodes, which Hulu release in three four-episode installments.

“The Neighbors” is a sitcom about the relationship between a group of neighbors who live in an apartment building. The lead character is Charlie, the manager of the building. The tenants are a diverse group of personalities, all of different ages and backgrounds, constantly bringing their problems to charlie and his secretary / girlfriend Bebe. The character of Princess Penelope creates a commotion after she witnesses the ghost of her uncle Prince Charles. It is a fresh and humorous look at human behavior through different points of view. This cocktail of characters always guarantees plenty of surprises. The demographic is all inclusive.

The Gothamist reviewed the pilot after seeing it Manhattan in 2014:

The show debuted on Hulu almost out of nowhere. Watch it here.

You can see the first episode for free below.

Pingback: What to watch the week of Friday, March 20 - Stream On Demand
Comments are closed.