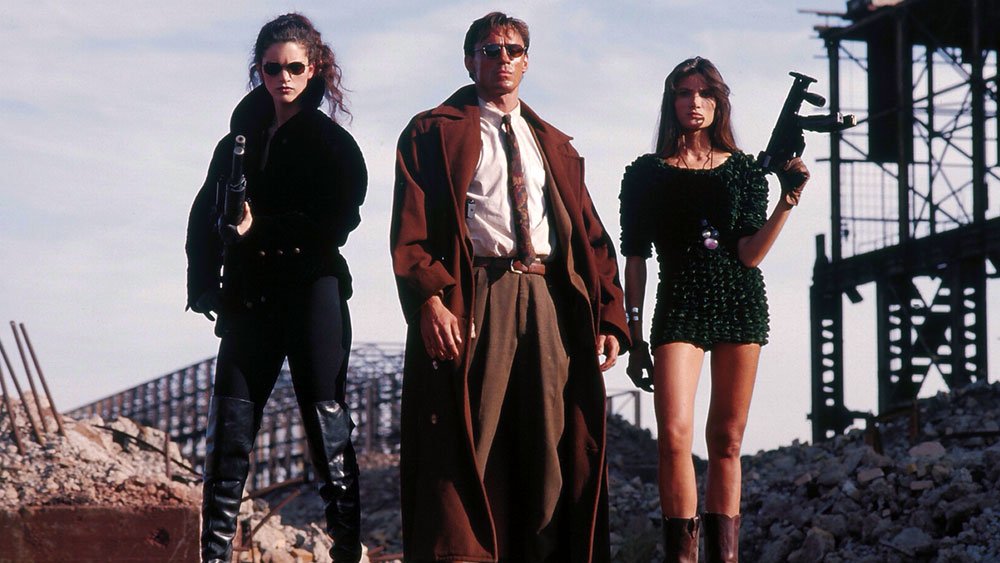 Nemesis (1993) plays out in the industrial wasteland just outside of LA, circa 2027, where there’s a covert war raging between the cyborgs and the humans.

“86.5% is still human,” insists super-agent Alex (Olivier Gruner, a Jean-Claude Van Damme wannabe complete with kickboxing credentials and thick Euro-warble) as he’s sent to track down his former cyborg partner (Marjorie Monaghan) before she delivers stolen data to cyborg terrorists. But as the conspiracy builds around him, Alex discovers that humanity is more than simply a matter of flesh and blood.

Nemesis borrows elements from Blade Runner, The Terminator, Escape From New York, and The Road Warrior, and anticipates the digital “data couriers” of Johnny Mnemonic, but it’s less about the story than the spectacle. Director Albert Pyun turns the sci-fi spy-story into an engine for a visceral thrill ride of sleekly designed action sequences driven by a dancing camera and a breakneck editing rhythm.

It’s a glorious triumph of style over substance, the vigorous pace leaving the story far behind and the nimble set pieces scenes belying its tiny budget with ambitious action choreography and impressive displays of property damage. A part from a few clumsy special effects at the conclusion of the picture and requisite collection of scene chewing performances, Nemesis is a thoroughly entertaining piece of sci-fi trash, a classic example of cinematic energy overcoming the obstacles of plot.

Also on Blu-ray and DVD and on SVOD through Amazon Video, iTunes, GooglePlay, Vudu and/or other services. Availability may vary by service.
Nemesis [Blu-ray]
Nemesis [DVD]