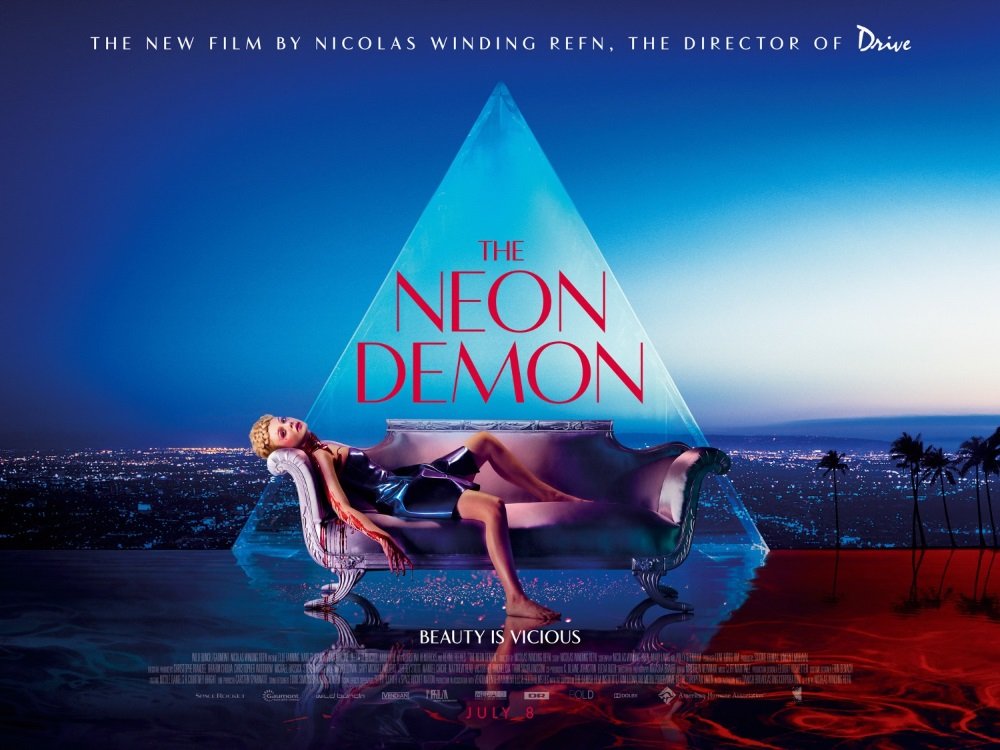 The Neon Demon (2016) – “I can’t sing, I can’t dance, I can’t write… no real talent. But I’m pretty, and I can make money off pretty.” We first meet Jesse (Elle Fanning), a 16-year-old girl from Middle America looking to leverage her youth and innocent beauty into a modeling career in Los Angeles, made up as a glamorous victim of a decadent world. Sprawled out in designer clothes across an expensive couch with fake blood slathered across her neck and dripping down her arm, she could be shooting the ad for her own fate in the big bad city.

Nicholas Winding Refn, who wrote and directed his social commentary-as-heady horror film, isn’t big on subtlety. Elle Fanning is a superb young actress who has become shorthand casting for innocence, youth, and authenticity, and that serves Refn’s purposes perfectly. She does indeed have that “deer in the headlights” look, as her agent (Christina Hendricks) says in one of the on-the-nose lines that fills the script, and her fresh look, not yet jaded by LA decadence, makes her the next big thing in a culture where the supermodels du jour age out of their prime at 20.

This is LA as a culture of predators and prey. On one of her first nights in the city, staying in a seedy motel (run by a thuggish Keanu Reeves) that is home to drop-outs and runaways, there’s an intruder in the her room. Not a person but a cougar that has already sniffed out the fresh meat in town. Put another way, Jesse is the delicate angelfish swimming in a pool of sharks but she learns quickly. Two hardened, competitive models (Bella Heathcote and Abbey Lee) size her up as the competition immediately at some industry soiree and begin immediately with the head games. A freelance make-up artist (Jena Malone) takes her under her wing but is it sisterly concern or something else? Malone is a seemingly warm, normal, human connection in a culture of surfaces and attitudes, but when we drop in at her day job styling corpses at a funeral home her whole nature is tossed into question when she uses her subjects as sex dolls. She’s an artist who wants to possess her creations. Heathcoate is perfectly feral as the cutthroat superstar model who plays mindgames with the competition while Abbey Lee, a real-life modeling veteran, brings out an ambiguous mix of hunger, loss, desperation, and opportunism as she loses jobs to Jesse, who starts to become as brittle and self-absorbed as the rest of the walkway meat market.

The Neon Demon was booed at Cannes and panned by critics that saw the film as vapid or shallow, but then that’s taking it all at face value. Beauty is the beast in this a horror film as fashion layout. Refn’s stripped down production design and eighties neon visuals are accompanied by synth soundtracks and dance club sounds, but the film is also filled with images of fertility, lunar cycles, hedonism, and occult symbols. What begins as an allegory for the hunger for youth and beauty with the modeling / show business industry as a form of vampirism becomes absurdly literal, channeling cannibalism and Countess Bathory bathing in the blood of virgins. I don’t see it as failed social satire, as its critics claim, but as a more primal portrait of the obsession for youth and beauty and the drive to control, dominate, package, own, and ultimately devour it. Jesse is the latest sacrifice to the gods of success and desire and power in NWR’s monogrammed photo shoot. And even if you don’t go with Refn’s predatory allegory, you can simply luxuriate in the glorious images and mad imagination of the modeling industry as sacrificial altar. This is style as substance and it is delicious.

Add to Amazon Prime watchlist or to My List on Hoopla, which is available through most public and college library systems.

Also on DVD and Blu-ray, with commentary by filmmaker Nicolas Winding Refn and actress Elle Fanning and the featurettes “About Neon Demon” and “Behind the Soundtrack of The Neon Demon.”
The Neon Demon [DVD]