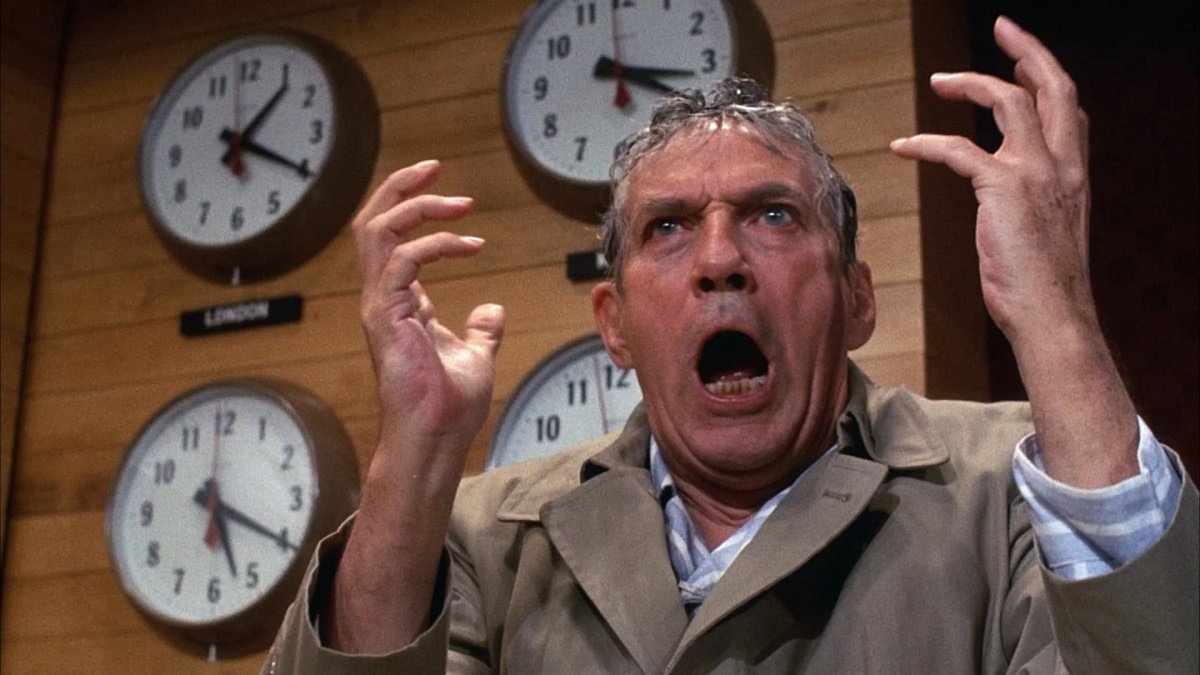 The opening title card of Network (1976) actually reads “Paddy Chayefsky’s Network.” It’s an almost unheard of possessive credit for an original screenplay. In this case, it is quite appropriate.

The Oscar-winning screenwriter and elder statesman of live TV drama pours all of his bile over the dirty little business of television into this incredibly entertaining screed. Yet the scathing satire of TV news turned into a three-ring circus played for ratings by bottom-line corporate overlords is so caricatured that it likely would have sunk into self-parody but for the direction of Sidney Lumet, perhaps the perfect director for such material.

Faye Dunaway gets star billing as the ruthlessly ambitious programming executive who is inspired by the on-air breakdown of news anchorman Howard Beale (Peter Finch) to fold news into the entertainment programming umbrella. William Holden plays the old-school news executive as appalled by the changes as he is fascinated with the ferocious Dunaway, who doesn’t differentiate between shop talk and pillow talk.

Lumet watches the news turn into a prime-time variety show like a documentarian with the story of a lifetime. It’s a veritable sideshow with fortune tellers, scandal-mongers and the ringmaster anchorman as the Mad Prophet of the Airwaves playing for applause from his live audience. But behind the scenes, Lumet plays out the business dealings as a more realist (if flamboyant) piece of corporate theater, viewing the bitter farce through the lens of modern America.

In the process Lumet saves Chayefsky from sinking under his own pretentions. Well mostly. The rarified dialogue is more theater than seventies cinema, too precious and pointed to give any human dimension to the corporate gamesmanship and ethical collisions. Dunaway’s insistence on discussing relationships as if it were a scripted serial makes its point the first time around. By the third go-round, it’s simply tired.

It’s awfully entertaining, thanks to the self-conscious theatrics of Chayefsky (“I’m mad as hell and I’m not going to take this anymore!”), the terrific performances (especially Holden as the only human left at the end of this profit-ringing process), and Lumet’s steady eye keeping the real world into perspective as the circus comes to town and stays.

And yes, it is prescient in its own absurdly exaggerated way, anticipating the era of tabloid and reality TV as well as the blurring of the lines between opinion and news. Plus it brings a whole new meaning to the act of “negotiating with terrorists.” These guys bargain syndication and overseas rights.

Robert Duvall costars as the corporate hatchet man who sees news as a drain on the bottom line and Ned Beatty is the CEO who sees the news as his own platform to spread his philosophy.

Nominated for ten Academy Awards, it won four, including Oscars for Chayefsky’s screenplay, best actor Finch (who won posthumously), best actress Dunaway, and best supporting actress Beatrice Straight. Finch also won the BAFTA for his performance. It was added to the National Film Registry in 2000.

The Blu-ray features all the supplements from the 2006 DVD special edition. Director Sidney Lumet provides an intelligent and engaged commentary track. “The Making of Network” is an in-depth six-part documentary that runs close to 90 minutes. “Private Screenings with Sidney Lumet”  is an 54-minunte interviews with the director conducted by Robert Osborne for Turner Classic Movies, and there is an excerpt from Chayefsky’s 1977 appearance on “Dinah!,” discussing the film with Dinah Shore.