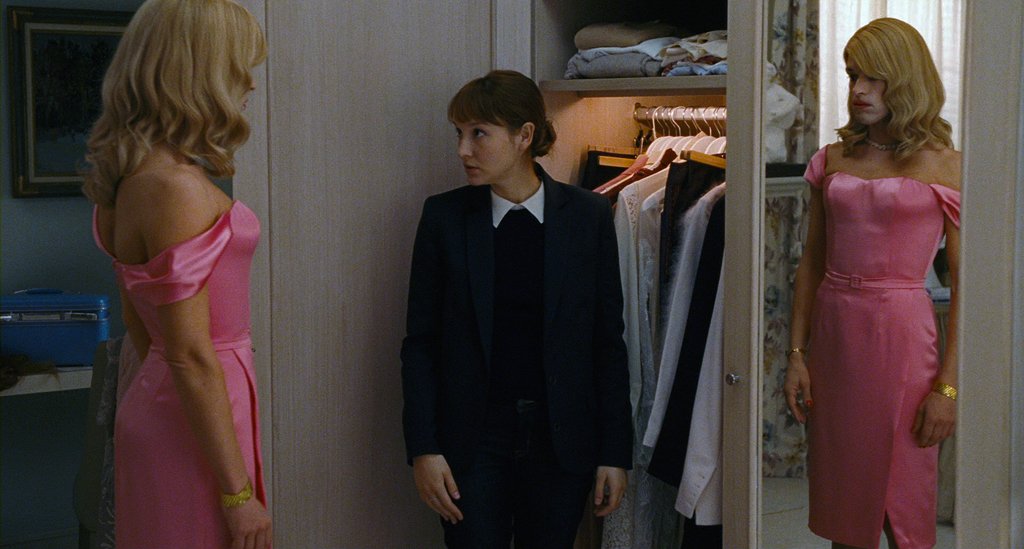 The New Girlfriend (France, 2015) of François Ozon’s comic drama isn’t what you might expect. Mourning the sudden death of his young wife (played by Isild Le Besco in flashbacks), widower David (Romain Duris) calms himself and his infant son by dressing in his wife’s clothes. It shocks his wife’s best friend Claire (Anaïs Demoustier), even after David explains that his wife knew of this predilection, but as she spends more time with his feminine side (which he names Virginia), she becomes enchanted with her new girlfriend.

It’s tempting to call this film a dark comedy—it is after all based on a novel by author Ruth Rendell (a specialist in mysteries and psychological thrillers)—but for all the wit (and there is plenty) there is very little darkness in this playful psychological drama. This ain’t The Danish Girl and David is neither gay nor transsexual. In fact, their girlish outings lead to sexual attraction between David and Claire, which complicates things as Claire is happily married.

Rather, this is a celebration of a fluid sexual identity and an acceptance of what years ago might be considered perverse or unnatural. Ozon presents it as a healthy acknowledgment of a non-threatening desire and a pathway to a new kind of friendship as Claire becomes a conspirator in David’s secret life. Though not a farce, there is a light comic touch to the elegant, sensuous production, Mostly, though, there is a sense of joy in embracing and exploring these experiences.

In French with subtitles, rated R for nudity and sexuality.